Remembering the Sikh soldiers of WW1 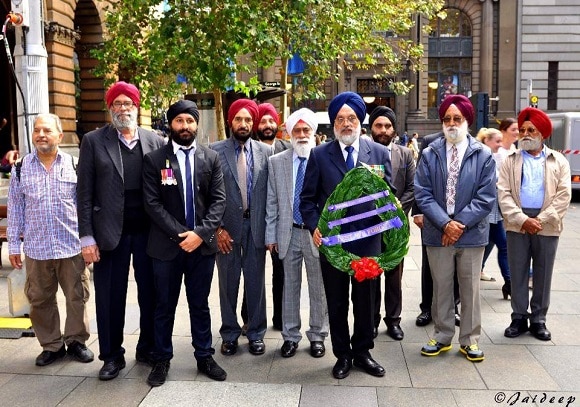 Reading Time: 5 minutesIt’s time we stood up and applauded the National Sikh Council of Australia for honouring Indian soldiers

For the ninth successive year this year, the NSCA joined Sydney’s annual Anzac Day Parade, paying tribute to their forebears who fought alongside Australian and New Zealand forces at Gallipoli in 1915.

“It feels fantastic, especially as this year’s anniversary was a rather special one,” Bawa Singh Jagdev, Secretary of the NSCA told Indian Link.

“Yes, this year the march was definitely more exciting,” agreed Ajmer Singh Gill, President, NSCA. “More people came out of the woodworks, to make up the largest contingent we’ve ever had.”

The contingent this year was 60 strong. Many people made the effort attracted by this year’s centenary celebrations.

They marched to remember the valour and bravery of their grandfathers and great grandfathers, and to tell the world of their continued status as a strong martial race who have fought injustice and prejudice for generations.

The ‘Anzac Sikhs’ this year were fortunate to have the Dasmesh Band, the world’s only Sikh bagpipe band, lead them out again, like they did in 2008.

“We are particularly grateful to Dasmesh,” Jagdev revealed. “It’s always so much more interesting to march behind a band in the Anzac Day parade. Dasmesh Band not only made us look good, they also entertained the onlookers with their fantastic music.”

The Malaysian band’s splendid uniforms in spotless white, with pink sarpech (turban jewel) on the white pagdis (turbans) and tartan capes trailing behind, were definitely eye-catching.

The NSCA has for long been campaigning to have an Indian band take them out.

“We have repeatedly asked the Indian government to help us organise a band for this annual march,” Gill revealed. “We have asked for an Indian military band to be sent out, perhaps from the 14th Sikh Regiment which was at Gallipoli in 1915. Disappointingly, our requests were not met yet again this year, even though their participation in this 100th anniversary would have been so significant.”

The Sikh community in Perth have a marching band that has been featuring in the annual parade for some years now.

“We tried to get a band up and going here in Sydney too but have not been successful,” Jagdev noted. “It requires way too much commitment and resources thrown at it which is simply not possible at this stage. I would like to encourage some youngsters to take up some band activities. We won’t be able to afford a Dasmesh visit every year! It is wonderful to have them though, and this year, they actually marched for other contingents too – they went around twice before leading us out!”

Preparation for the march gets underway some five months in advance, Jagdev described. “We send the word out via the gurudwara and advertisements and emails, seeking people who may want to join us. Once people have shown interest, we get them to register and to organise their uniform. Each year we find new members, ex-servicemen who are parents of adult children who have migrated here. Plus of course youngsters who are serving in the Australian armed forces.”

Like every year, a delegation from the NSCA also joined the wreath-laying ceremony at Martin Place prior to the march.

This year, there were added elements that were cause for celebration as the NSCA gradually finds its Anzac activities expanding.

A photographic exhibition at Parramatta, curated by Malaysian historian Harchand Singh Bedi, created much interest in the community for its snapshots of the Indian soldiers at Gallipoli.

As well, a Greek community commemoration held annually, extended an invite to the Sikh community for the first time this year, to jointly honour their forebears who fell in the war. The Lemnos 1915 Commemorative Committee of NSW holds a dawn service in early March. Lemnos is a small island off Greece at which soldiers of the 14th Sikh Regiment had landed on 4 March 1915, in preparation for the invasion of Gallipoli which took place on 25 April that year.

“In February this year, the Consul General of Greece Dr. Stavros Kyrimis invited us to join their dawn service to honour the Sikhs soldiers who paid the supreme sacrifice in the battle of Gallipoli. I accepted and took along a Sikh priest to say words of prayer.”

The NSCA hopes to join the 4am ceremony every year on 4 March.

In another first, the Multicultural Communities Council of NSW honoured the many different community groups who have links to Gallipoli. The event was held on 23 April at Wests Leagues Club, Ashfield with some 200 people in attendance, including those from the Egyptian, Lebanese, Macedonian, Chinese, Greek, Subcontinental, Koreans and Vietnamese communities.

The Ode was recited by Tom Cheong, a 92-year-old veteran of World War II who served as a pilot in the Royal Australian Air Force.

Ajmer Singh Gill attended on behalf of the Indian community, alongside Amarinder Bajwa who acted as MC and made the Acknowledgement to Country.

In Melbourne veterans joined ceremonies again this year, while 2015 marked the first year Sikh veterans and their descendants were able to participate in the Adelaide Anzac march.

A hundred years on, the Indian soldiers who fought in World War 1 may finally rest in peace in the knowledge that they are being honoured in so many different ways.