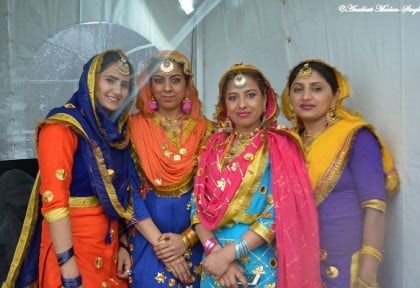 What the Rockbank Dussehra event taught us this year

The much awaited Dussehra celebrations held each year at Rockbank Durga Mandir were a bit of a damp affair, quite literally.
Looks like Indradev (the God of the Rains) wasn’t too kind to us, which is why many decided to give this big event a miss. However, a rather large crowd did still manage to come, confirming that we Indians never shy away from a celebration.

Patrons were seen enjoying the food and shopping, as opposed to watching the usual cultural shows organised by the Temple that included Ram Leela and dance performances by local groups. The Ram Leela played on in the background, as the audience remained tucked away under the shed and inside the temple to keep dry.

The event was attended by Cr Sophie Ramsey and Consul and Head of Chancery, Indian Consulate Rakesh Malhotra. The food on sale looked yummy, but sadly the vendors selling their products had to close down early due to expected rains. A yoga session inside the temple attempted to keep the devotees engaged. All in all, a well-organised event which was dampened by rain.

Dusshera symbolises the victory of good over evil, with good being Lord Rama (the Prince of Ayodhya) and evil being Ravana (the Ruler of Lanka). Ravana himself was a mighty ruler, religious scholar, great warrior, and a devotee of Vishnu. So much so that, as stories have it, Ravana was one of the original gatekeepers (Jay and Vijay) for Lord Vishnu who didn’t allow the Four Kumaras (sages looking like children) to meet Lord Vishnu as he was sleeping. The sages punished the gatekeepers and cursed them that they would have to give up their divinity and be born as mortals on Earth. Jay and Vijay requested Lord Vishnu to remove this curse. However, Lord Vishnu gave them two choices: to have seven births as Lord Vishnu’s devotees or three births as his enemies. And as the tales have it, Ravana chose three lives as his lord’s enemy rather than seven as his devotee as he couldn’t bear to stay away from his lord for that long.

Doesn’t this show strength of character and utmost level of devotion? Then how can someone with this strong ideology be considered evil? Yes, he was arrogant and yes, he did commit a crime by abducting a woman. Not to sound too feminist, but even Lord Rama, as humble as he was, doubted the integrity of his devoted wife. We all have flaws. Shouldn’t we all be accepting of each other rather than just judging one another for a single act or trait and ignoring all other positives? Don’t get me wrong, I’m not questioning anyone’s faith or even my own. I do worship Lord Rama for his humility and kindness. But I feel Ravana deserves some respect for his devotion and knowledge.
And even as the baddie Ravana, out there on the Ram Leela stage at Rockbank, met his end at the hands of the mythical hero Rama, the event taught us all a wonderful lesson this Dussehra. Just as we must learn to identify the Ravana or the negativity inside our own selves and purge it out, we must learn to stay positive when occasionally the tide turns against us. Let our inner light guide us when the outside turns dark.
As we pray for a more enlightened world this Diwali, let us learn to take whatever light we can hold on to, into the cold with us.
Let there be peace and positivity in this world.