Party on my mind 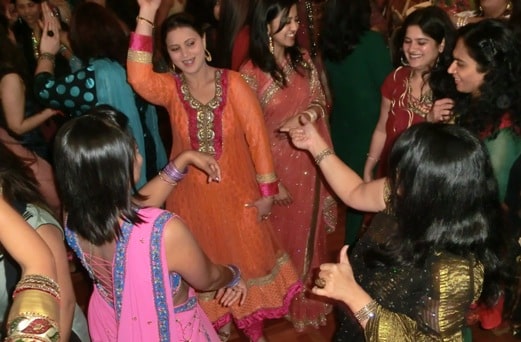 So goes the latest party anthem courtesy Saif, John, Deepika and Amisha, and as always, it suited community sakhis perfectly.
The annual Sydney Sakhi Sangam was on again mid-July, and yes, the party shoes – and those stringy cholis with plenty of oomph – were out once more in all their sparkling glory.
The day-long girls-only party, Sakhi Sangam (literally “girlfriends gather”) turned fifteen this year. It began as a lunch affair for a small set of friends, and today, the annual congregation of yummy mummies has become a community institution.
If you’re a woman in Sydney’s Indian community, it is a “have-to-do-at-least-once” kind of event.
Nearly 800 women attended this year, all out to have a good time, have some lunch, get some mehndi, buy some jewellery, perhaps a sari, and generally kick up their (beautiful) heels.
And yet there was one striking difference this time round. The force behind Sakhi Sangam, Nandini Thadani, was conspicuous by her absence, having suffered a heart attack the day before. Yet she had decreed from her hospital bed, trust her, that the show must go on. Her partner-in-crime Sushma Ahluwalia and dependable lieutenant Preeti Thadani ensured the event went on as planned and just as smoothly.
Pinks and greens dominated in the couture this time, and there was a fair bit of black as well. Plus, of course, some impossibly high heels, plenty of bare backs, a whole lot of bling, and sometimes, bare backs adorned with bling!
Lead sakhis Sushma and Preeti, assisted by Kanwal Gujral of Manjit’s, cut a cake to mark the 15th anniversary. As a special token of appreciation, surprise presents were given to ladies who have been attending for the past 5, 10 and 15 years.
As always, guests were treated to Bollywood style entertainment followed by a sumptuous Manjit lunch (that rabdi kheer, sakhis will agree, was to die for). Afternoon tambola was brisk and business-like, with some fantastic prizes including discount vouchers for Nautanki Theatre’s upcoming Indo-Oz play An Indian Embrace; dinner at Manjit’s Balmain; Dipal Hair and Beauty, and an oil painting titled Shivling created and donated by Kanwal Gujral. The take-home gift this year was a lovely photo frame, in which the girls can frame their pics from the day, no doubt.
Topping it all off was some heavy-duty dancing, as the girls tucked in those glistening pallus and kicked off the shiny shoes. DJ Desi’s sound, probably way too high for the middle-aged crowd, nonetheless turned them into Chamak Challos, Desi girls, Radhas on the dance floor, Tumhi ho bandhus, Dilli wali girlfriends and Anarkali disco chalis. Ghaghras twirled, chunnis unfurled, and in one case, a drink sat perfectly balanced atop the head, as the girls danced in gay abandon.
The good wishes of the sakhis no doubt pulled Nandini through her little health incident. Days later, and still in rehab, she beamed with satisfaction as she said, “I am so happy it went off well and everyone had a great time”.
Three cheers for Nandini: hip hip hurray!
And next year’s theme? What else, Sweet Sixteen!

And make sure you check out Sydney July (2) 2013 issue which comes out on Thursday July 25th  to see if your photo is in it!