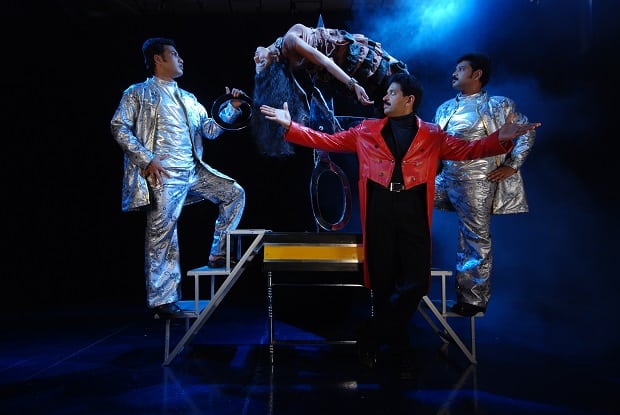 A magician’s passion for magic has translated not only into a Magic Academy, but has also become a mission to spread social messages through the world of illusions. Meet Gopinath Muthukad, recipient of the International Merlin Award 2011 or the magician’s Oscar, conferred by the US based International Magician Society. Gopinath is an illusionist and a stunt performer who has been in the field of magic for over forty years and still counting.

“Magicians never tell”, smiles Gopinath when asked by Indian Link to reveal the secret behind the three rope trick signifying communal harmony that he performed just before we sat down for a chat. On his first visit to Australia with a production titled Muthukad’s World of Illusions, Gopinath along with his entourage, has performed in different cities. He has received an overwhelmingly enthusiastic response from the Brisbane audience, and this master of illusions allowed a peek into his life, work and thoughts on magic.

Hailing from a town in the Malappuram district in Kerala, Gopinath grew up listening to magical legends told to him by his father.

“I started learning magic from a Guru and gave my first performance at the age of ten”, reveals Gopinath. “Magic was not very popular in Kerala in 1970s, but I continued learning new tricks”, he adds. Gopinath graduated with a degree in Mathematics and later went on to pursue a degree in Law in Bangalore, but dropped out midway; to pursue a career in magic! “Magic encompasses all branches of science and mathematics”, he explains. “Magic is a tool through which I entertain and educate people. There is a certain mission and vision in mind when performing”.

Gopinath has performed in over 40 countries and has travelled the length and breadth of India spreading social awareness messages via the streets, stage performances and workshops on topics like communal harmony, literacy, the teachings of Mahatma Gandhi and messages of martyrs likes Bhagat Singh and Mangal Pandey, to name a few. He also sensitises the masses on the ills of smoking, alcohol and drug abuse.

Gopinath has a particularly strong campaign titled ‘Stop SAD’ (smoking, alcohol and drugs), in which a healthy looking man enters a huge syringe and when he does exit, the man looks leaner and unwell. More such tricks take place until the man appears to be a skeleton.

“Through such performances, the audience is not only taking in the message subconsciously, but at the same time they are thrilled to see magic”, explains Gopinath. It takes him anywhere between three to six months to come up with new acts on a particular societal topic.

Gopinath also spreads awareness of superstitions through specific magic shows that are aimed at nurturing scientific poise and self-confidence among college students and unemployed youth.

“Magic can be used in two ways; firstly to entertain and educate the audience, and secondly to prove certain people have supernatural powers”, he avers. He shares the tricks of his magical trade with twenty aspiring magician students every year through his Magic Academy in Thiruvananthapuram, Kerala. The first of its kind in Asia, the academy was founded in 1996 and is supported by the government of Kerala. The academy’s curriculum involves all subjects related to illusion and magic, and the course duration is two years. At the end of the course the student is awarded a ‘Diploma in Magic’ certificate. In recent years, the magic course has even been approved by the University of Kerala.

When asked if anybody could be a part of this school, Gopinath quips, “During the interview process we look for a certain skill set; the individual should be able to successfully deliver the same”.

So does Gopinath admire any particular magician? “Yes, my favourite till date is David Copperfield”, he states.

Gopinath is also excited that 1500 magicians from across the globe will be travelling to Kerala in October 2014 for the grand opening of ‘Magic Planet’, the world’s first Magic of Mansion, at the Kinfra Film and Video Park in Trivandrum that is owned by the Government of Kerala. “This has been my ultimate dream project to provide a platform for everyone to seek creative explorations, experiences and discoveries that are all rooted in magic”, he says with enthusiasm.

Before leaving, I tried again to prise out the secret of the magic act where a person’s body is cut into half and then put back together. Master magician Gopinath simply smiles and says, “This is magic!”