Momos from the mountains 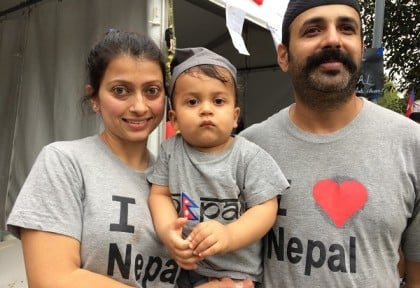 The community shares its culture at the Nepal Festival in Adelaide

With fond memories of my recent treks in Nepal, I certainly could not resist visiting the Nepal Festival held in the very heart of Adelaide. The unusual flag in the shape of a double pennant flying high, beautiful costumes, the lilting music, and momos at the foodstalls all brought back images of the Nepal I had seen and had the pleasure to savour.

This was the second Nepal Festival organised by the Non-Resident Nepalese Association, South Australia. Secretary of the Association, Nabin Pant explained, “The main themes of the programme (are) to promote our tradition, our culture and food, and the tourism that Nepal is famous for.”
Community events need support so it was encouraging to see a number of diplomats and politicians lending their weight to the event.

The day was also the perfect opportunity for the growing number of Nepalese residents of Adelaide to meet new migrants and renew bonds with friends not seen for some time. Young couple Sandeep and Uchita have been in Australia just a month, contrasting with Kumar Gurung, a veteran of 40 years’ residency here.
While Uchita is commencing studies at Flinder’s University, Kumar is President of the aptly named Adelaide Khukri Football Club. Looking at the cluster of young men wanting to sign up, it was commendable to witness the contribution he is making to the community.

And then the music started, first with the Kutumba Instrumental Band from Nepal. It only took the first couple of notes of a song to be played and the crowd recognised the tune, happily joining in with singing. The men started the dancing first. Dancing in the traditional folk-dance style, individually yet in a group with gentle movements. Ladies joining in brought colour to the dance floor.
There was a spontaneity about it all, nothing forced or to strict form. Just enjoyment and letting go. It was audience participation at its best, and for those sitting out, it was easy to get a feel of the fun and pleasure whirling to the music.

Nepali music, always joyous, has its particular sounds that evoke the spirit of the people. The use of flute is emblematic of Nepali music while the unique sound of the madal or drum is the backbone of traditional lok music. With these sounds embedded into the Nepali soul and the band blasting out much loved favourites, it was impossible not to be drawn into the euphoria and group singing.
All along, groups of little children performed their dances as only children do, watched by doting parents and a cheering crowd. Later, Shanti Pariyar came out to sing to everyone’s delight, followed by Narayan Rayamajhi. Both are noted singers from Nepal, clearly well-known to the audience.

There was a good crowd with many young families. I had the pleasure of meeting Ganga Bahadur Gurung, an ex-Indian Army gurkha, with his wife while his family were serving masala teas to the thirsty.
Ribs and skewers of meats were turned on the charcoal grill sending up delicious aromas drawing customers back for more. The chefs could barely keep up with the demand for the ever popular momos as plate after plate went out faster than they could be served.
A variety of chaats were there to satisfy every taste. And to top it all paan made individually by Pratik was a delightful way to end the food extravaganza.

Clouds had kept the heat away and the evening was as pleasant as it could be in the leafy, green setting. An advantage of being in the centre of Adelaide was that passers-by and shoppers were attracted to the event.
Surely that is one of the points of having such a festival – to share one’s culture with others; promoting understanding by increasing familiarity. Music and dance are a universal language as is sharing the delights of one’s food.

For me, a nice touch was the sweet little snow-making machine. Surely, it’s unimaginable not to have snow at a Nepal Festival, even in Adelaide.