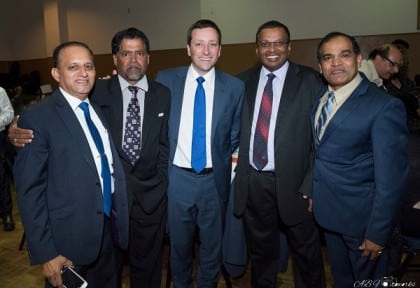 With 19 months left until the next state election, Opposition Leader Matthew Guy claimed recently that the state of Victoria can be better than it is currently.
“Victoria today is less confident, less safe, has less of a direction than, I think, it has had for a very long time, but we can do better,” he said.
The Opposition Leader was addressing a gathering at the Leaders Multicultural Gala organised by the Multicultural Liberal Business Club (MLBC). Held at the Hungarian Community Centre in Wantirna, the Liberal Party fundraiser attracted a packed house of Liberal supporters from various multicultural communities.

The Opposition Leader went on to criticise the current Government for paying more than $1.1 billion to scrap Melbourne’s East West Link road project. He touched on the Government’s controversial industrial deal with the Fire Fighters Union and the axing of plans for a private hospital wing of a new cancer centre.
The Liberal Party leader also slammed the Andrews Government for what he called turning a blind eye to the crime wave that is sweeping the state and for not reforming bail laws, sentencing and judiciary policies. Also under fire was the Government’s implementation of gender studies in state schools.
“This state has a problem; and it is not the crime system or the level of crime nor the education standards or the East Link, it’s none of those. The problem is the Government, and in 19 months’ time we are going to change all that,” he said. “The Victoria I lead will be a more confident, more centered and more commonsense Victoria,” claimed the Opposition Leader.
He promised to improve the quality of education, welcome the private sector when it comes to heath care and implement a one strike and you are out bail system.
“Ladies and gentlemen, I will build East West Link,” he declared to the audience. He asked everyone to come on board to help him and his Government by being a part of the change.

It was smiles and snaps galore when Matthew Guy went on to meet and greet guests later in the evening. A fundraising raffle and auction was also conducted to help raise funds for the Liberal Party. Michael Kroger, Liberal State President in Victoria, was in attendance along with other prominent members of Liberal Party.
In his speech, Param Jaswal, President of Federation of Indian-Origin Multi-faith Organisation (FIMO), remarked that there was an incorrect perception that Multicultural Liberal Business Club is mainly a club for Indian businesses. However, with the efforts of Vasan Srinivasan, Founder and Chairman of MLBC, it now has representatives of various multicultural communities on board, many of whom were present at the gala dinner.
Entertainment came in the form of some energetic, percussion from Japanese group Wadaiko Rindo. The Taiko drums and the spectacular display of stamina, strength and synchronisation of the traditional Japanese drummers captivated the audience.
Tavreen Jaswal presented a quintessential Bollywood number with grace, followed by an elegant classical Indian dance performance by Art of Vinayasa Dance group. More multicultural performances followed while an eclectic menu of Indo-Chinese food, catered by Tandoori Junction, took the multicultural theme further.
“The strength of the Liberal Party is based on the quality of people who work tirelessly to promote their cause and it is great to see that so many people have turned up at our event today,” said an MLBC spokesperson. “They have dug generously into their pockets, particularly the sponsors, for which we are very thankful.”