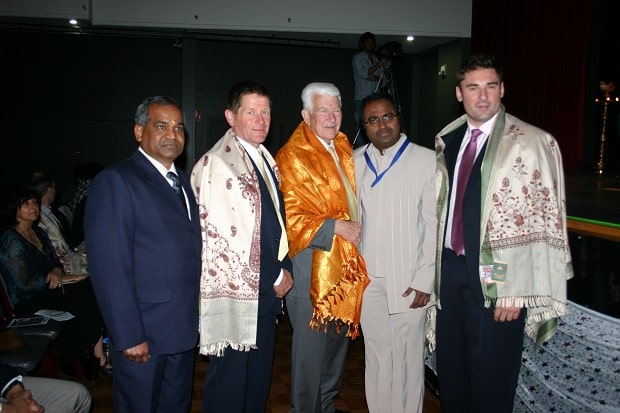 AUMSAI Sansthan Australia celebrated Dasara 2013 and Shirdi Sai Punyathithi celebrations at the Kingston City Hall in Moorabbin recently. Devotees, community members and a large number of local dignitaries attended the popular event. The festivities were marked with myriad cultural items, traditional food, community award presentations and a plethora of speeches.
Joining in the celebrations was an impressive list of guests including Ms Elizabeth Miller, MP Bentleigh; Ms Inga Peulich MLC Member for South Metro Region, Parliamentary Secretary for Education; Mr Nirmal Chowder Acting Indian Consul General; Mr Chin Tan, Chairperson VMC; Ms Lorraine Wreford, MP Mordialloc; Mayor Cr Ron Brownless OAM, City of Kingston; Mayor Cr Amanda Stapledon, City of Casey; Mayor Cr Jamie Hyams, Glen Eira City Council; Mr Srini Chidambaram, Commissioner VMC; Cr Karina Okotel, Glen Eira City Council; Cr Geoff Gledhill and Cr Paul Peulich of City of Kingston. Offering a warm welcome and keeping in tradition with AUMSAI hospitality, all the guests were presented with handcrafted shawls and mementos.
Entertainment items set the tone for the rest of the evening. The event officially commenced with a short prayer and mantra recitation by the priest that was accompanied by music from the Nadaswaram (musical instrument). The dignitaries were encouraged to participate in the traditional ceremony, and auspicious vermillion was applied to their foreheads. MC Aviti Sharma then introduced and welcomed each guest to the stage. The speeches that followed were mercifully kept brief, wherein a majority of the guests commended AUMSAI for their active involvement in the community and extended their greetings for the festival season.
After the formal part was over, the festivities continued and the audience was entertained with items presented by local artists and amateurs. Popular amongst the entertainment section were patriotic songs sung by Nawal Moudgil and his student, some wonderful renditions by Saffron Grove singers Shriram Iyer and Bobby Beebob. A graceful Moon Dance was performed by the Chinese group Ya Hui, and a vibrant bhangra item was presented by Melbourne Bhangra Regiment.
Also well received were the Ganesha Dance by Chandana Galeti, group dance by Akshara Yannam and team, followed by a children’s fashion show, and foot tapping performances on various medleys. The Indian classical section saw some talented performances in Kuchipudi and Bharatnatyam by Rachana Natyalaya and Nadanalaya Dance Academy. The audience also enjoyed some live music from Ajax Band.
The AUMSAI Sansthan held the event in association with Planet Insurance and Financial Planning, and with the support of the Victorian Multicultural Commission. Mr Rampal Reddy Muthyala, AUMSAI Treasurer and Life Time Trustee, owner of Aarya Supermarket (Member of South Metropolitan Regional Advisory Council, Victoria) was instrumental in getting local representatives to attend the festivities. During the event, community service awards were presented to Mr Charles Harris and Dr Jagvinder Singh Virk for their invaluable and continuous support to community. Towards the end of the event, AUMSAI Founder and Trustee Anil Kolanukonda offered the vote of thanks on behalf of the trustees and committee members of AUMSAI Sansthan.