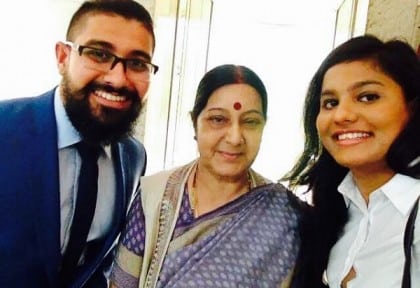 The Indian Ministry of External Affairs recently hosted the 8th Pravasi Bharatiya Divas Conference in New Delhi. The issue of this panel discussion was ‘Problems faced by Indian students abroad and NRI students in India.’ Participants from nine different countries joined 16 panellists from India to discuss issues relating to the Indian student experience overseas, and suggest possible solutions. Among the 13 overseas representatives were Yuva Australia secretary Arpita Singh and Anindya Bhowmik, a UTS Alumnus.
Arpita Singh, 23, is originally from Kanpur, Uttar Pradesh. She was an international student in the past, studying for a Bachelor in IT in Australia.


She and Anindya were selected by the Consulate General of India in Sydney, in conjunction with Yuva Australia President Astha Singh to represent Australia at the PBD Panel Discussion. As young people working in the community who were former international students, they have had firsthand experience in dealing with some of those issues problems and concerns themselves.
“When I was studying, my issues were having less working hours, struggling to manage my fees, and a lack of travel concession,” Arpita told Indian Link. “There was no social organisation from where I could seek help for my studies, my job or for networking.”
In preparation for the discussion, Yuva Australia, in collaboration with the Consulate General of India in Sydney and the University of Technology Sydney Indian association Om Shanti, organised an Indian International Students forum. This was complemented by an online survey by Yuva Australia designed to collect data on the problems faced by Indian students studying in Australia.

The survey met with a massive response and was completed by almost 200 Indian international students from various tertiary institutions.
Arpita and Anindya also met with a couple of senior employees from IDP Education, who provided valuable insight into some issues their clients face such as problems with their visas, admission difficulties, placements complications and more.
“I have always been passionate about empowering young people and enhancing their capacity to be self-dependent,” Arpita said. “I could relate to the students telling us about their problems and being unsure of how to resolve them.”
The results of the forum, survey and additional research were compiled into a report presented by Arpita and Anindya during the panel discussion at the PBD Conference.
The meeting, hosted by the Ministry of External Affairs, was chaired by the External Affairs Minister Sushma Swaraj. Following an Introduction of the panellists and the keynote address by the Chair, Minister of Human Resource Development Prakash Javadekar addressed the roundtable panel and kicked off the discussion.

Some eminent points were raised by different panellists throughout the discussion. Some of those issues were common amongst students from different countries such as high tuition fees, visa processing issues, and employment related issues.
Arpita and Anindya reported some key issues pertaining to Indian students studying in Australia. Local issues like high travel costs, shortage of graduate programs for international students, and a lack of job opportunities were raised by the Australian team.
Various solutions were also suggested to the panel from teams from different nations, including the Aussie pair. All agreed there is need for countries to better regulate and govern private education agencies.
“My biggest takeaway from the discussion was that the MEA cares about international students,” Arpita said. “They have launched an online portal called Madad (Help) where all international students can register and lodge their issues in the same place.”

At the conclusion of the panel conference, the MEA agreed to a 10-point plan of solutions, including creating and maintaining a database of currently enrolled Indian international students, and the importance of preparing students better via toolkits tailored specifically for their country of arrival, which will assist them with their journey and stay in that country.
Through the Indian High Commissions and involving local youth organisations, and representatives like Arpita and Anindya, the MEA hopes to reach out to more international students and support them through their educational journeys.
- Advertisement -
Share
WhatsApp
Facebook
Twitter
Linkedin
Previous articleTales of wonder from a land beyond
Next articleConverting for love