From humble beginnings, Adelaide’s Ganesha temple has grown into an icon of the community. 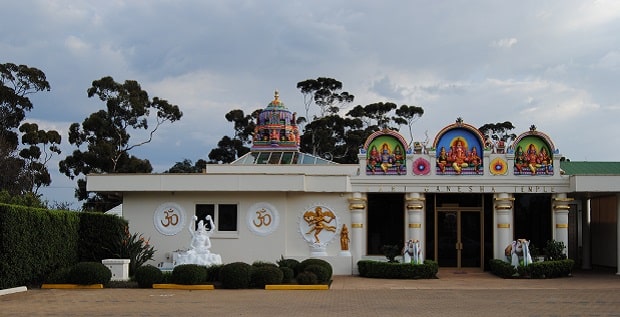 Whenever one sees a picture of the Opera House, Sydney pops up on our mental screen. And Taj Mahal transcends you to tantalising India. Every major city in the world has a structure that represents it or the country where it is located, like the Statue of Liberty, Eiffel Tower or Big Ben, to name a few. Travel brochures are living proof of their value as tourist magnets. Such buildings have attained iconic status due to their age, design and character unique to the era of their construction.  Their socio-cultural values have been etched into their community’s heritage canvas.

Being a young nation, Australia may lack such spectacular age-old structures. However, most states have buildings ranging from little cottages to magnificent mansions that give a narrative of the lifestyle, social and cultural values of the early years of settlement.  To ensure that such a narrative is not lost to future generations, state governments have used legislation to protect some of those buildings by listing them on a heritage register. Generally those buildings are of considerable antiquity.

But one building that got the gong is only thirteen years old – South Australian Hindu Society’s Ganesha temple in Adelaide. Number thirteen has proved lucky, in its case. Adding the temple to the register, the SA Heritage Council states, “The place meets the criterion 16(1) of the Heritage Place Act of 1993. It has strong cultural and spiritual association for the community … The temple is significant as the State’s first traditional Hindu temple  …  since late 1990s it has provided the State’s Hindus, from different sects, with a place for both spiritual worship and cultural studies. The design of the temple resembles the human body lying on its back with the head to the east and feet to the west and houses 25 hand-crafted deities ….”

Understandably, the Hindu Society is elated at receiving this badge of honour, and also being the first Hindu temple in Australia to be felicitated. How it achieved this, can be explained by following its 30-year journey. Like most public organisations, it started from humble beginnings. Way back in the mid-‘70s, about a half dozen families would meet at weekends to chant ‘bhajans’ under the banner of the Hindu Seva Samaj.  It was the brainchild of Moti Somers, an arts teacher from South Africa. Around the same time Rajesh Chandrasekaram, a teacher from Malaysia, organised Vedanta Society meetings for similar spiritual purposes. Both these informal groups used to meet at individual residences. In 1985, Dr Ravindran, an orthopaedic surgeon of Sri Lankan and Indian origin, sowed the seed for the Hindu Society, inviting three members from each of the above two groups, including Dr Janan Easwaran (Sri Lanka), Baghwat Sharma, Mohan Odhavji (Fiji) and Ken Soman (India).

With the number of migrants of Hindu faith increasing, the need for a common place of worship was keenly felt.  Just four months after its inception, the Society purchased a vacant Lutheran church hall in Marion, 15km south of the CBD. It was a very basic single-storey cement brick building that would seat around 80, with a small office room. At one end the hall was a metre-high wooden platform with a Cross placed on it.  The gravel car park outside had space for 10 vehicles. The society opted for this austere building since it had no funds; any green field option was out of the question.  Announcing its decision on the purchase at a meeting in November 1985, the Society received pledges for a third of the purchase price and the balance at the time of settlement two months later, with no need for borrowing. It was a remarkable feat. The local Hindu population might have been small, but its enthusiasm high enough to make Adelaide the second city in Australia to have a temple.

The austere building’s transformation to what it is today is simply amazing!  However, it was not without a few bumps along the way, as could be expected with any public organisations of its kind. Initially a framed picture of Ganesha adorned the platform; it still hangs on one of the walls and is fondly revered. Within six months of buying the building, a metre-high granite statue of Lord Ganesha – as He is universally accepted by all sections of the Hindu community – was brought from India and installed on a concrete pedestal after a simple but authentic prathishta ceremony witnessed by a full house in July 1986.

Now being a house of God, there arose a need to open the location and offer puja every evening. In the absence of a traditional priest, some volunteers like Dr Ananth Rao, a mathematics professor and scholar; Dilip Chirmulley, a university lecturer; and a couple of others well-versed in scriptures undertook this job on a rotational basis for over a year. In 1988, Skandaraja Kurukkal from Malaysia was appointed the priest. A handful of generous members undertook to fund the priest’s accommodation and other expenses, as the temple had limited resources.

With all the religious features of a temple in place and more migrants arriving, devotees started attending in large numbers. On major festival days there was not enough space, and devotees had to stand outside to obtain darshan and partake of prasad.  As the building was surrounded by houses on all three sides, there was no room to expand. It was proposed to build a temple at the car park, shifting the idol there and converting the temple building to a hall. Moving the consecrated did not find favour with some sections. Lack of space and resources confronted even the Almighty.  No solution could be found until 1992 when an opportunity arose to buy the backyard of an adjoining house, and it was taken up even though it cost as much as the original church building! It was only made possible thanks to a generous donor.  Lord Vigneswara, described as a ‘Remover of obstacles’ knows how to spot kind-hearted devotees.

The next few years were mainly taken up in raising funds with the annual Diwali dinner being the main event. Mr Dilip Chirmuley and Dr Jagan Mazumdar, during their terms as president, tried to move the project along.  In the general community, opinion was divided as to which of two proposed plans could be adopted. Counselling was sought even from overseas experts including Subramaniya Swami from the Kauai (Hawaii) Hindu temple and Prof Kailasanathan from Jaffna University. One plan involved placing deities representing the aspirations of all regional groups in a single file, whereas the other plan was to keep Ganesha at his present place and build shrines for the other deities. The latter plan was approved at a general meeting. From then on things moved fast, with Dr Jagdish Saraf taking the reins in 1998 as president, with good support from Siva Selvakulalingam as vice-president and Dr Janan Easwaran as a large-hearted donor.  Sri Natarajan, a renowned stapathi (chief temple artisan) and six craftsmen arrived from India in early 2000. Working long hours seven days a week, they transformed an unassuming old building into an astonishing place of worship.  Their accommodation and living expenses were all borne by a generous donor. In November 2000, all the deities were installed according to vedic scriptures and consecrated at a four-day kumbabishekam ceremony witnessed by thousands of devotees. An icon was born and a dream of all those noble souls involved since mid-‘70s was fulfilled.

A captivating feature of the temple is its gopuram (dome) adorned with colourful statuettes from various Hindu mythology, all constructed by hand by the Indian craftsmen.  This dome is visible from quite a distance and has become a traffic-stopper. Even more astonishing is the glass roof surrounding the gopuram.  Besides letting in plenty of light, this unique feature acts like a divinely window to the upper world. On moonlit nights, soft rays filtering through the glass give it an unparalleled feeling of peace and tranquillity. These two features would not have escaped the attention of the Heritage Council officials during their inspection visits before granting the temple heritage status. Very many glowing comments about the temple in the Visitors Book would have also impressed them. During the second kumbabishekam earlier this year, they observed the rituals and noted their religious and socio-cultural significance to the community.

Selva, president since 2001, takes pride in pointing out other features such as the level of community support that helped to complete every stage of the temple, without borrowing a cent.

“By having idols specific to major sections of the Hindu community, the temple serves as a haven of harmony with each group taking ownership of major festivals of particular importance to them,” he says.

Marble idols placed on one side and granite idols on the other, in line with the custom in North and South India, provides a unifying edifice. More than a religious place, the temple serves as a cultural centre by holding classes in Hindi and Tamil, classical dance performances and spiritual satsangs. Volunteers explain Hinduism principles to visiting groups from schools and service clubs.  It functions as a social hub too, for new migrants to establish their network with people from their regions.

“All these aspects were made known to the Heritage officials during meetings with them in the course of six years since an application was made”, says Selva.

The Adelaide Hindu community and their temple may be small compared with their counterparts in the eastern states, but they have become the pace setters.