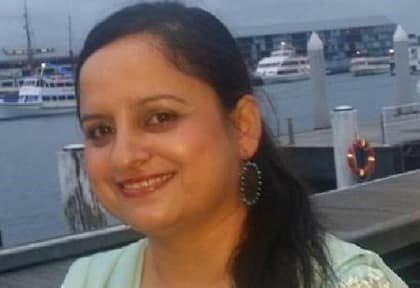 Torrential downpours didn’t keep more than 200 people away from gathering in Blacktown this week to commemorate the life of Glenwood resident Harjit Kaur. NSW Police have charged her husband, Jagdish Singh with her murder. The vigil, organised Blacktown Women’s and Girls Health Centre (BWGHC) and Blacktown City Council, was attended by community leaders and politicians as well as Ms Kaur’s family, friends and members of the sub-continental community. The vigil commenced with a prayer by representatives from Parklea Sikh Temple, which Mrs Kaur frequented.

NSW State Member for Blacktown, John Robertson addressed those gathered, relaying that Harjit Kaur is the ninth woman to die from domestic violence in Australia so far this year.
She was killed in the tenth week of the year.
Blacktown Mayor Stephen Bali reaffirmed Blacktown City Council’s commitment to the cause, assuring the crowd that Blacktown will serve as leader in tackling domestic and family violence (DFV), despite the issue not being a problem unique to the area.
Domestic and family violence knows no geographic, ethno-religious, socioeconomic or cultural barriers. As a frontline service, Blacktown Women’s and Girls Health Centre works around-the-clock to support women, many of subcontinental background, arming them with the knowledge and skills required to escape harmful relationships and create lives free of abuse.

In the face of weakening state government support, access to fewer resources, and pitted against deeply entrenched social and cultural ideologies which aim to normalise DFV, frontline services are fighting an uphill battle.
Federal Member for Greenway, and Shadow Minister for Communications. Michelle Rowland, who has a history of legal advocacy for DFV victims, was deeply troubled by Mrs Kaur’s death as it not only occurred in her electorate, but the family were also among her neighbours.
Speaking on the issue, Ms Rowland said, “Frontline services know what they’re doing. They know what they need to do, and need to be supported by government.”
Moni Habib from BWGHC works throughout the week to ensure women are supported and advocated for. “Everything starts with education, and education begins in the home,” she explained.

What can be done by way of education

Whilst as a society we are becoming increasingly aware of the statistics around the fatalities caused by DFV, the greater cost remains hidden. Many women – particularly those from sub-continental background – are unable to properly differentiate between healthy and normal relationships and those which may be more insidious. “Particularly when a woman is not working, and is made to feel as though she is not contributing, she may be more likely to accept an unhealthy dynamic,” Ms Habib continued.

It is the inability to recognise domestic abuse as being beyond physical violence which prevents early intervention. A key part in tackling DFV is for us, as communities, friends and families, to become aware of warning signs such as controlling behaviour, persistent messaging, control over or limited access to finances, verbal abuse and put-downs and cyber abuse, such as demanding access to email and social media accounts.
Threats of violence, whether to the individual, family members (including those overseas) or even pets, are an extremely common way in which people who use violence exert control over their victims and leave them feeling trapped. This is not a precursor to domestic abuse, this is domestic abuse.

Understanding that mainstream Australian services may not innately grasp the cultural intricacies of our community, Kittu Randhawa, Chair of the Indian Subcontinent Crisis and Support Agency (ICSA), an organisation specifically supporting subcontinental victims of DFV, wants to assure women that support is out there. “People don’t report… and often, as in the case of Harjit, it is too late.”

The most troubling issue facing the subcontinental community, she says, is the lack of protection offered to spouses and dependents residing in Australia as part of temporary visas.
“The law as we know it does not extend to these women. For them it is a case of put up or shut up,” Ms Randhawa said regarding situations where women, legally residing in the country, risk deportation for speaking out.
Whilst culturally it can be quite natural for us to avoid talking with our friends and community members about their family lives, remaining silent may well be the difference between life and death, as was the case for Harjit Kaur.

Even when confronted, victims can be reluctant to disclose the realities of their situation for a myriad of reasons, however it is vital to ensure that people know that they are supported, will be believed and will not be shunned. That they know there is a future and a life beyond violence, and that it is within reach.
For Support:
Blacktown Women’s and Girls Health Centre – http://womensandgirls.org.au/ 9831 2070
ISCA – http://www.icsa.net.au/