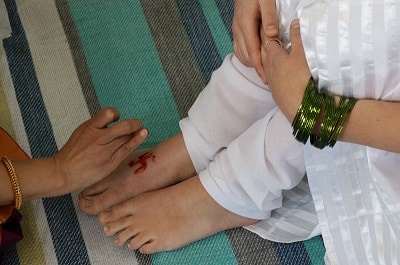 And now these three remain: faith, hope and love. But the greatest of these is love.

A young Australian woman is living proof of this Bible verse from Paul the Apostle, recently choosing to convert to Hinduism in the name of love.
Together with her beloved, the couple (names withheld for privacy reasons) celebrated their life-changing event in a private ceremony held in regional Victoria last month.
According to Hindu celebrant and priest Dr Jayant Bapat OAM, who conducted the proceedings, this ceremony could well be the first time this ritual has been performed in Victoria.

“I have lived in Australia for over 50 years and practiced as a Hindu priest for most of that time,” he said. “I performed this ritual for the first time for a young Anglo-Saxon lady who wished to become a Hindu.”
According to the young woman, “My personal reason for becoming a Hindu and having a ceremony converting to Hinduism, first and foremost, is because I fell in love with a beautiful Indian man from a strong Hindu background.”
“By converting to Hinduism I laid the path to building a deeper and more meaningful relationship between my partner and his family by sincerely showing the willingness to learn and respect their religious background,” she explained.
“Our cultural differences were seen at one stage as a barrier to our future happiness rather than an opportunity to grow and enrich our lives by some, ourselves included,” she continued. “My partner and I, in the near future, wish to marry in India at the local family temple. We hope that this ceremony will help others to understand our decision to build a future together.”

According to Dr Bapat, who is also a lecturer and researcher in Hinduism, “It has long been acknowledged that one needs to be born a Hindu; conversion to Hinduism has not been generally possible. The background of this belief probably stems from the fact that Hinduism is not prophetic. Rather, it is a collection of the teachings of hundreds of seers over many thousands of years.”
Speaking at length about the history of religion, Dr Bapat explained that prophets from many other religions believed that God had given them a special task of spreading their beliefs amongst people; conversion to the faith therefore was, and remains, the most important function, especially for preachers belonging to those faiths. “This situation simply did not apply to Hindu Dharma that evolved over a very long time and is still doing so,” he said.
Dr Bapat has performed hundreds of Hindu Vedic ceremonies in Melbourne and continues to do so. “Hinduism is known to be accommodative, inclusive and tolerant and this attracts many non-Hindus,” he said. “Thankfully, over the last thirty or so years, a ritual has been formulated which makes it possible for people to accept the Hindu faith. It is a short ritual that takes no more than two hours.”

Those who attended the recent ceremony said it was simple and meaningful, and they were touched by the young lady’s sincerity and determination. As part of the ritual she sought blessings from four Hindu couples who attended the event. Her family and the man she loved were present and very supportive. Her father also recited a verse from the Bible. A vegetarian meal was served upon conclusion of the ceremony.
Dr Bapat, a recipient of the Order of Australia medal at the Queen’s Birthday Honours in 2011 for his ongoing support and contribution to the Indian community, said it had previously been difficult for those who wanted to adopt Hinduism. Many people who wavered from the faith, but wanted to revert to Hinduism were not able to do so in the absence of any ritual or overarching body to make decisions on religious matters. Though an official conversion ritual is a great signifier of faith, Hinduism is all about practice and adopting a particular way of life.