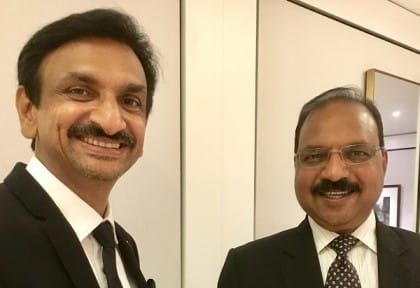 Sujoy Kishore takes over the reins from Madhu Mathen

Being involved with the launch of Air India flights to Australia was indeed an honour,” outgoing Air India Regional Manager Australasia, Madhu Mathen told Indian Link. “It certainly was a challenge and a steep learning curve,” he recounted to a group of well- wishers and travel agents at his farewell party in Sydney recently. Madhu has been promoted to General Manager Marketing at Air India’s corporate headquarters in Delhi with the responsibility of driving global sales.
Air India launched their triangular services between Delhi, Sydney and Melbourne in 2013 and operate four weekly flights to Sydney and three weekly to Melbourne. Flying the Dreamliner planes, this territory has proved so popular that on his recent visit to Australia, Chairman and Managing Director Ashwani Lohani announced that in 2017 there will be 10 weekly flights to Australia.


A large part of the credit for the success of Air India in this part of the world goes to Mathen who, along with colleague Ravi Bodade, was instrumental in establishing the network of ground operations, travel agents and other support for the airline in Sydney and Melbourne. Now, Air India tends to be a sentimental favourite for Indians in Australia travelling back to the country of their birth and for Indians wanting a direct connection to Australia.
“I had to unlearn and relearn the more intricate concepts of marketing pretty quickly when I arrived here,” Mathen said. “To position Air India as an airline of choice was not easy, but I am extremely proud of the achievements I have had. My dream team here contributed to making Air India such as strong presence in Australia.”
Sujoy Kishore is now the new Manager for Air India Australia and is looking forward to carrying the legacy forward. Having spent time in Nepal, France and Korea, and at the head office in India, Sujoy told Indian Link ,”The foundation of Air India is very strong in Australia and soon with our increased flights between the two countries, it will certainly be easier for people in both countries to interact with each other. With cricket and such, Australians already know much about India, and Air India makes it easier for them to travel there also.”
- Advertisement -
Share
WhatsApp
Facebook
Twitter
Linkedin
Previous articleBald and beautiful!
Next articleMy high school life