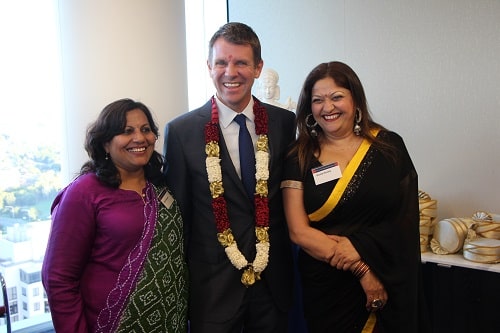 With less than 10 days to go until the NSW elections, pundits are already giving the election to the Coalition. It seems Mike Baird will continue as the Premier of NSW, a job in which he was thrust after the sudden resignation of the former Premier Barry O’Farrell last year.
While Barry O’Farrell had worked hard to get to know the local Indian Australian community, Mike Baird was a relative enigma, with very limited interactions with the Indian community. A community meet-and-greet earlier this year to talk about his India trip and a visit to a Holi function in the election month, allowed the community to know him a little better.
On the election trail, Indian Link gained access to Mike Baird and raised a few issues of concern to the Indians in New South Wales.

Pawan Luthra: Premier, given NSW’s AAA rating, why should we be leasing our electricity assets to private companies?
Mike Baird: When we came to power we had to start cleaning up the mess Labor left us in. The state is now doing well because we focused on getting the economy going. We now need to secure money to build infrastructure. Money doesn’t grow on trees.
We can’t borrow any more, that would affect our triple A credit rating. Rather than wait, we have an opportunity to do what any business would do. We need to look at the balance sheet and make the best economic decision.
We are not selling our assets, we are only leasing the poles and wires. We’re leasing 49% which means we maintain full public ownership. All the experts say this will create downward pressure on prices, despite the scare campaigns from Labor.
We’ll take the rent for the 49% to fund public infrastructures, we keep public ownership of the assets, and we keep our triple AAA credit rating.
We want to grow the economy and build infrastructure which has been sadly neglected by Labor, and this is the way to do it. The expectation is to build the economy by $300 billion over the next 20 years. The total NSW economy is worth $500 billion at the moment and we’ll be providing over 120,000 more jobs just by implementing these plans.

PL: What’s it like on the campaign trail?
MB: Obviously it’s a tough campaign and we’re fighting every day. I feel positive. We have a positive plan for the state, in terms of jobs, road and rail, building the hospitals we need, and keeping the economy moving. We’re not taking anything for granted.
PL: Coming to Indian community affairs, what is the future of Parramasala should there be another term of the Liberal government in NSW?
MB: I can confirm Parramasala will definitely be returning to Western Sydney later this year, even bigger and better. It’s a symbolic time of year. At Diwali, when we turned the Sydney Opera House orange, that event, coupled with Parramasala, are the ties that bring us together. We’ll be looking at tying up Parramasala with a tourism boost. It’s become a wonderful event and I look forward to going back again this year. 100% there will be funding made available for the event.

PL: In the aftermath of the recent tragic death of Prabha Arun Kumar, what is the government doing to improve safety on our streets?
MB: My thoughts and prayers are with Prabha Arun Kumar’s family and friends after this horrific event. All of us mourn her loss. The police are doing everything they can to find out the details and track down those who are guilty. Anything we can do, we want to do. We are mourning with the community.
A re-elected Baird government will set up a community safety fund of $10 million and will call on community and local business groups to nominate crime fighting projects in their neighbourhoods.
At lot of communities know there are areas where there’s better lighting required, so what we’re saying to the communities is – let us know the areas that aren’t safe and bring forward those ideas to us and we’ll provide the funding.
It gives power back to the people. Anything we can do, we will do.

PL: We at Indian Link have proposed that the pathway between Argyle and Amos Streets in Parramatta be bestowed with the name ‘Prabha Arun Kumar Walkway’ as a tribute.
MB: I think that’s a wonderful idea. We want to talk to the family to make sure they’re okay with it, but that would certainly have my full support. I think that would be a wonderful tribute. But I would want the family to finish their mourning first.

PL: What steps have you taken to boost the trade between NSW and India?
MB: We really focused on trade when Prime Minister Modi was here, and then when I went on my tour of Gujarat, Delhi and Mumbai. The focus is on competitive strengths. The numbers of trade with India currently are relatively small. It’s just on $2 billion now, as compared to China with $30 billion. There’s a huge upside to increasing the trade opportunities.
What Prime Minister Modi is doing is putting great focus on infrastructure and his desire to have up to $3 trillion dollars’ worth of infrastructure investment in India. This is going to require expertise and other financial services which we can help provide. Other areas where we can provide assistance would be agriculture, smart cities – in terms of clean water, IT, and there are big opportunities together with skills and training. During my visit to India we signed a number of MOUs focused on skills going back and forth.
Prime Minister Modi has asked that I come back every year. And as you know, when Prime Minister Modi asks you something, you can’t say no. It was a busy trip, a great trip. If you build on your relationships and friendships then the trade will follow. This is a long overdue commitment. Premier O’Farrell was very active in his visits to India and I’ll be doing the same.
I got on with all of the Chief Ministers, in Mumbai, Gujarat and Delhi. I see big opportunities with all of them. Mumbai has a new Chief Minister who is relatively young, and people were comparing the two of us. Obviously he’s overseeing many more people than I am. But there is an opportunity to build the trade relationship at a Chief Minister level and at a level with Prime Minister Modi. I would like to implement similar things as we did with other countries – bringing together Chief Ministers and Premiers in the same delegation.

PL: And with the cricket World Cup on, who is the premier backing to lift the trophy?
MB: There’s no doubt, if you go through who’s potentially in there, that if Australia doesn’t make it to the finals then I’ll be backing MS Dhoni, Kohli and the team. We have a special relationship and it’s one of the great things between our countries, our love of cricket. I wish them well, but I do hope they come second to Australia!
***

Up Close and Personal with Mike Baird
Standout memory from your visit to India in January?
As we were driving on the other side of Mumbai around the bay, we had a spectacular view across the bay, very memorable. And also, during my trip I had the best curries I’ve had in my life!

An Indian personality who has inspired you?
Without doubt, Prime Minister Modi. I heard him speak out here in Homebush, but it’s his vision which I find inspiring.  With Prime Minister Modi it’s not just an economic vision, but restoring India back to a country with an attitude where we have to look after everyone. He wants to put hundreds of millions into the economy in his desire to take care of everyone. There is a great opportunity for the world to play a part in that and I’m excited for NSW.
On the cricketing side, Indian opener Virender Sehwag – I loved the way he batted. He batted the way I always dreamed I would, but the problem was I always got out!

An Indian movie you have seen or book you have read
Slumdog Millionaire was brilliant. In fact it was one movie my children really enjoyed and we were able to talk as a family about life beyond where we live.

Favourite Indian restaurant? Favourite order?
Close to where I live is Sri’s in Collaroy. Sri is a long-time friend. My mother and father-in-law used to live around the corner and we’ve been around there regularly. Lovely man, lovely food.
I go for everything. The butter chicken is pretty spectacular.

Message to the Indian community in NSW
To the Indian community, I say thank you. The role it plays and strength it adds in NSW, is increasingly significant. We feel a real affinity with India, in terms of the work ethic, the contribution to the economy, not only with cricket, but the history and culture. It’s who we are as NSW – the multiculturalism – and Indians play a big part in that.