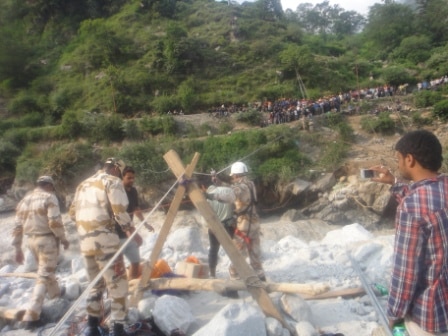 As bad weather, fresh rains and dark clouds briefly halted rescue operations in Uttarakhand, Chief Minister Vijay Bahuguna admitted it will “take another fortnight to evacuate flood victims” and that over 1,000 may have perished in one of the worst disasters to have hit the hill state.With most parts of flood-ravaged Uttarakhand witnessing overcast skies and the Met department forecasting heavy rain in the next two days, the thousands who are still stranded in a devastated terrain face a frightening challenge.Although heavy rains on Jun 23 hindered the Indian Air Force (IAF) aircraft’s landing on the flood-ravaged state’s Dharasu airstrip, the army and the Indo-Tibetan Border Police were able to evacuate hundreds of stranded people from jungles and remote areas of the region.Bahuguna, who is overseeing the rescue and relief efforts following the cloudburst and humongous floods, said the deaths could “well cross 1,000″.”The tragedy is still unfolding and a conclusive figure can only be arrived at after the rescue teams reach the areas devastated by the rains of the last weekend,” he said.He also said that the rescue teams will take another fortnight to evacuate flood victims as the roads leading to affected areas have been badly damaged.”It’s very tragic that so many people have died in this calamity. It will take a long time to rebuild Uttarakhand. There will be no Kedarnath Yatra for at least next two years,” he said.The chief minister said scores of houses had caved in after the cloudburst near Kedarnath, while slush in many areas had buried locals and pilgrims, raising the spectre of a frightening death toll.On the basis of reports reaching Dehradun from the hills, the Uttarakhand police control room also said the toll would rise much above 1,000.Congress general secretary Ambika Soni, who is also in charge of the party’s affairs in the hill state, said that efforts would be made to reconstruct the areas near the revered shrine of Kedarnath that were devastated in the floods and cloudburst last week.According to official figures so far, over 550 people have died, while over 20,000 have been evacuated.
Lt. Gen. Anil Chait, commander-in-chief of the army’s Central Command which is spearheading the rescue operation, told IANS that the army will rescue every single person stranded even in the remotest hills.
Admitting that this was “by far the worst tragedy” he had come across in his career, Gen. Chait said about 8,500 soldiers of the mountain division and medical corps have been deployed in the rescue and evacuation efforts.
“We have also been able to shift more than 18,000 people stranded for days in Gangotri, Joshimath, Badrinath, Kedarnath and Pindari glacier,” Gen. Chait said.
He said fresh rains and inclement weather were a frightening prospect, and that army helicopters were able to rescue only seven to eight people at a time.
The most difficult place to reach was Jangal Chatti area, one official told IANS, adding that more than 15,000 people were still to be evacuated in the state.
Heavy rains are expected between June 25 and 27, and even multi-layered clouds will hamper flying.
Heavy rains are forecast in Pithoragarh, Uttarkashi and Chamoli districts, among the worst hit areas.
With more than 1,000 major and minor roads washed away, officials say air rescue is the only way to get trapped people to safety. But some roads have now been opened and some made motorable.
Besides the army, the Indo-Tibetan Border Police (ITBP) has rescued around 24,000 pilgrims and tourists from the flood ravaged Uttarakhand so far.
“We were able to rescue over 4,613 people from the flood-affected areas today (Sunday) itself,” ITBP spokesperson Deepak Kumar Pandey said at a media briefing.
Rescuers said they are doing their best to ensure that the “last living soul” in the rain-ravaged areas is brought back to safety, but admit that airlifting of stranded people may become impossible when rains and downpours begin.