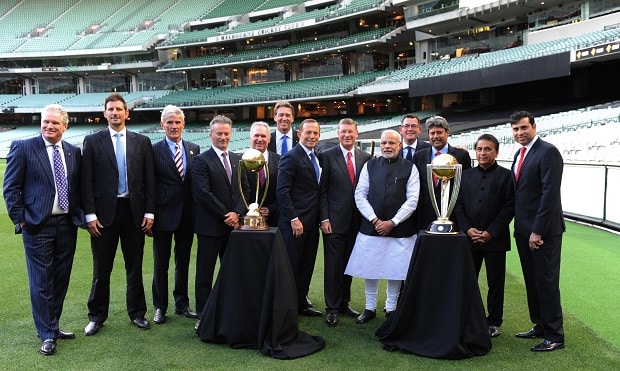 Australian community leaders on their experience of Modi in Australia

No one had imagined that Australia’s relations with India would almost transform after just one visit. Prime Minister Modi took the Australian East Coast by storm, from Brisbane to Melbourne through Sydney and Canberra, and he struck a chord wherever he went. Prime Minister Modi wowed his audiences with his formal English speeches as well as his masterly Hindi oratory. But it was not symbolism alone, this was one of the most substantial visits ever undertaken by an Indian leader.

Clearly, there is today a clear convergence of values and interests between India and Australia in almost every sphere: economic and trade; security and geo-strategy; and people-to-people. But it required the statesmanship of Modi and the bonding of Tony Abbott and Modi to translate a potential partnership into a genuine friendship. This has happened.

I was given the honour of  moderating  the CEOs roundtable with Mr Modi at Government House in Melbourne on 18November. Australian businesses have, in the past, been bearish and cautious about India and found it difficult to work with India. Not so on this occasion. The crème de la crème of Australian businesses were there including Andrew Mackenzie, CEO of the world’s largest resource company, BHP Billiton; Mike Smith, CEO of ANZ Banking Group; Sam Walsh, CEO of Rio Tinto; Anthony Pratt, CEO of Visy; and Gina Rinehart, CEO of Hancock Prospecting Limited. They were tremendously excited by Mr Modi and his vision for the Indian economy.

Mr Pratt announced the setting up of a high level Leadership Dialogue between Australian and Indian business, political, and civil society leaders. The Australia India Institute will run this dialogue. Anthony Pratt will be the founder patron and Ross Fitzgerald of Visy and I will co-chair the dialogue. The Prime Minister blessed the dialogue which will take place annually beginning with Delhi next October.

All in all, we could not have expected more from a visit which has, without exaggeration, changed the course of Australia India relations, in every sense of the word.

I was extremely impressed with the enthusiasm and admiration of the crowd at Allphones Arena who came to see Prime Minister Modi speak. To have so many people attend an event for a world leader is truly exceptional. You wouldn’t get 30,000 Brits celebrating David Cameron if he visited Sydney, so this demonstrates the Indian community’s respect for Mr Modi as a man of great stature.

I was privileged to get to spend a few moments in conversation with Prime Minister Modi. He is a really good person – ordinary, down to earth and without hubris. It was lovely to meet with him.

The most important facet of this visit for both the Indian and Australian governments is the demonstrated commitment to accelerating the pace of our relationship. There has always been a fundamentally good relationship, with our shared language, history and strategic interests, but there’s potential to go further. With two new governments, and two new Prime Ministers who seem to like each other and get on well both personally and politically, it is time for an accelerated relationship. Both governments are keen to sign a Free Trade Agreement as soon as possible.

There is such a good Indian diaspora community here, especially where my electorate is in Western Sydney. The community is thriving. People are running great businesses, settling their families here, and the Indian migrant story is overwhelmingly successful. It’s a great story – Indians are peaceful, commercially successful and have great family life here in Australia.

Steve Waugh
Former Australian cricket captain, 2004 Australian of the Year, Officer of the Order of Australia

Prime Minister Modi is very positive, basically saying ‘India is open for business’. It’s the fastest growing economy in the world and I think Australia would be mad not to do business with India. We have a lot of similarities which are mentioned, a lot of similar interests, and I don’t think we’ve done enough in the past to build those bridges. Cricket, is one commonality, obviously, but there’s a lot of business connections we should foster and Prime Minister Modi certainly encouraged that today.

I’m launching a business today called Waugh Global Realty and I’ll be looking to sell real estate to NRIs and also Indians in India. I’m partnering up with some top developers, so I’m starting a new business. But Prime Minister Modi also spoke about education, science, agriculture, infrastructure – there’s a lot of skills in Australia we can export to India.

Already some of the steps that Prime Minister Modi has taken make a lot of sense. He’s gone out there and said he will be doing more for the mining industry to see it develop more in India. I suspect that means it will happen.

Prime Minister Abbott and Prime Minister Modi seem very close. There is a lot of understanding, also, of course, sharing a democratic background. There is an increasing Indian presence in Australia, there is increasing trade between our two countries. I hope, although it is already a warm relationship, that it will get deeper at every level.