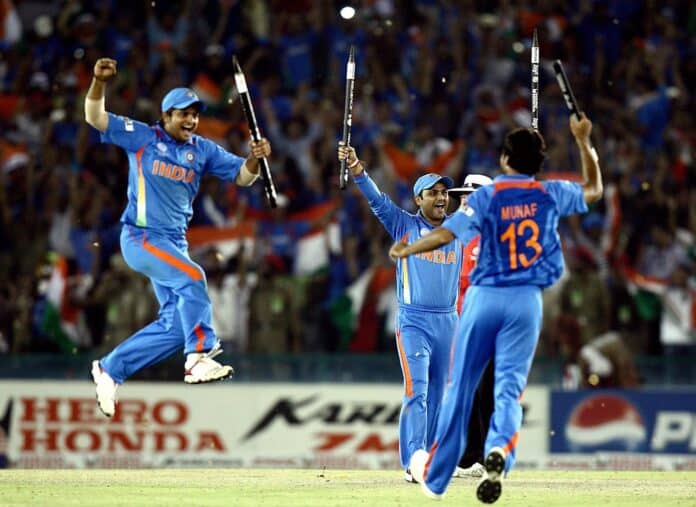 What are Team India’s chances of retaining the World Cup title?

Only two captains in the history of the game have successfully defended a World Cup – Clive Lloyd and Ricky Ponting. And until two months ago, MS Dhoni and India were genuine contenders to repeat the feat at the 2015 World Cup. They had just battered the hopelessly underprepared Sri Lankans 5-0 at home, following strong displays in home and away series wins against the West Indies and England respectively. However, two months is a long time in international cricket. It can be the difference between sparkling form and debilitating fatigue, peak fitness and sudden injury, and in India’s case, supreme confidence and stifling uncertainty.

It was thought that India’s long tour of Australia should help them acclimatise to the conditions in time for their first match against Pakistan on Sunday 15 February 15. Instead, although India have now been on these shores for over two months, things have only gone from bad to worse. The batsmen showed glimpses of form in the Test matches, but India’s toothless bowling attack was nothing short of embarrassing. Now, the tri-series against England and Australia has revealed glaring deficiencies in India’s limited-overs batting, and the bowlers have stuck diligently to their plans to strive towards complete mediocrity.

To put it lightly, India will need to tweak a few nuts and bolts if they want to emulate the feats of the great sides of yesteryear.

It is both a burden and a blessing that India have little room to adjust their fast bowling attack; it is likely that three of Bhuvneshwar Kumar, Ishant Sharma, Umesh Yadav and Mohammed Shami will play in every match, and they can at least be generally sure of their places in the side. However, even including Stuart Binny, in whose bowling MS Dhoni generally appears to have little faith, the attack is one-dimensional and likely to disappear to all parts of the ground, particularly in the ‘death overs’ where it has been so vulnerable in the recent past.

Without Varun Aaron, there is no out-and-out express bowler, a crucial element in Australian conditions that each of the stronger sides have covered. New Zealand have Adam Milne, South Africa have Morne Morkel and Dale Steyn, and Australia – take your pick. Add in the fact that there is no left-handed seamer, and it is clear that batsmen will adjust quickly to the attack.

Not all bowlers can be the spearhead; a specific role needs to be given to each of them. Whether it’s using changes of pace, cutters, bowling full and fast, or hurling down short deliveries, each bowler needs to know what his captain is expecting from him at a particular time during the innings, especially during the death overs. This ensures at least some variety in the attack while cementing each bowler’s responsibilities and allowing Dhoni to set a relevant field.

India goes into the tournament with off-break bowler Ravichandran Ashwin and slow left-arm orthodox bowlers Ravindra Jadeja and Axar Patel. However, uncertainty hangs over each of them. At the time of writing, the injured Ravindra Jadeja has not yet played a match in Australia, all-rounder Axar Patel has failed to score a single run, and Ravi Ashwin has barely been given a chance. None of this inspires any confidence, and India is heavily reliant on their spinners in the middle overs.

If India can’t find two performing spinners, they should play four seamers – at least on the smaller New Zealand grounds, where the propensity for spinners to disappear over the short boundaries is immense. Otherwise, Ashwin and Jadeja must be favoured over Axar Patel; each is a stronger batsman, and although Patel is a similar bowler to Jadeja operating from a greater height, Jadeja’s fielding far outclasses Patel’s.

Australia’s son-in-law Shikhar Dhawan, who lives in Melbourne with his wife and son, has had an extremely tough “tour” so far. After a promising first outing in Adelaide, his form has nose-dived. His fragility outside the off-stump has led India to search for another opener in their squad; the only problem is, they sent their best opener home after the Test matches when Murali Vijay departed Australian shores. And so India sticks with Dhawan.

It is a significant problem. Duncan Fletcher and Ravi Shastri can only do so much in such a short period of time to fix Dhawan’s technical deficiencies. Although there have been suggestions by commentators such as Ian Chappell that Stuart Binny should open the batting with Ajinkya Rahane, and a casual conversation with Indian journalists reveals their strong desire to play Ashwin at the top of the order, these are bits-and-pieces solutions.

There is no capable replacement opener in the squad. If Dhawan’s form continues, there might come a time in the tournament when outlandish ideas may be the only way forward for India’s opening combination – just as Sri Lanka did with Sanath Jayasuriya and Romesh Kaluwitharana in 1996. Don’t be surprised if you see Binny or Ashwin facing up first against one of the weaker attacks.

Unlikely does not mean impossible, and stranger things have happened in World Cup history. But, if they fail to arrest their current slide, India’s 2015 World Cup campaign may just derail before it gets off the ground.