A strong sense of community 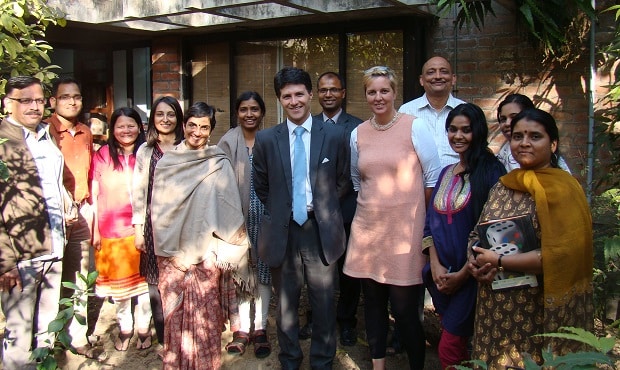 Reading Time: 4 minutesMinister Dominello’s enthusiasm and admiration for India abounds after his recent visit there

Minister Victor Dominello, NSW Minister for Aboriginal Affairs and Citizenship and Communities is held in high regard in the Indian Australian community. Soft spoken and articulate, his youthful looks have made many a local Indian family inquire about his marital status and on learning that he is single, they have yet unsuccessfully tried their hand at matchmaking! His energy is boundless and the Minister has readily made himself available to various members and organisations within the community.

Speaking to Indian Link on his return, Minister Dominello was enthusiastic about his love and admiration for India. This was his second visit to India; the first one was in 1999 when he backpacked his way across the country.

“I found amazing changes in India since I was last there,” Dominello told Indian Link. “One of the few most noticeable changes is the rapid advancement in the uptake of the mobile phones. It seems that everyone over the age of 14 has a mobile phone, and now have access to information and the ability to communicate with anyone around the world”, he stated. “What will be amazing is that in the next 15-20 years, mobile phones will be able to help people monitor even their health, such as blood pressure and heart rate, among other features. The vast Indian population can benefit from mobile technology linking with preventative heath opportunities”.

Another feature about India that impressed him was the rapid infrastructural changes over the past 15 years. “There are roads going to villages which were non-existent during my last visit; there are also cranes in the air at various locations [on building sites]. I also was impressed by the knowledge and passion for politics which the local Indians have. They are willing to debate on almost any topic at any time”, he mused almost wonderingly.

In Delhi, Minister Dominello met with Minister V Kishore Chandra S Deo, Minister of Tribal Affairs and Panchayati Raj, and found similarities in both their portfolios of empowering the tribal communities in India and the local Aboriginal community in NSW.

“The approach is slightly different,” Dominello explained. “In India, because of strong family ties, empowerment of youth comes from their family connections; but in NSW, mentoring is on a wider basis. But the desire to bring youth into the spotlight from our respective communities is very powerful across both the governments”.

Minister Dominello was also pleased at the progress and continual discussions held between Sydney and the Indian city of Ahmedabad. “Annual visits by the Premier and other NSW ministers will further reinforce our mutual respect for each other”, he averred.

The Minister was also was excited about the ‘Young Leaders Program’ in NSW scheduled for mid-2014, and the promise by Varsha Eknath Gaikwad, Minister for Women and Child Development, Government of Maharashtra, to attend with her delegation. “This will further cultivate a closer relationship between the younger people of both states”, he said.

During his trip, Minister Dominello also visited the Dharavi slums in Mumbai and yes, he admits that the sight is very confronting. But ever the optimist, the Minister felt amazed at the strong sense of community within the slums and how hard people were working to improve their lives. “I am confident that there will be a lot of positive changes in the next 15 years”, he predicted.

Minister Dominello was also impressed by the work of the Aga Khan Development Network, and how they had brought about critical change by empowering women and children in the community. “I was impressed by their systems, for example how groups of women came together to better their drainage system by collecting water from their rooftops. Now these very groups are working towards saving money towards micro-financing projects. I strongly believe we can use some of their strategies for our local indigenous communities”, he said.

On a lighter note, the Minister admitted that he learnt three Hindi words, shukriya, dhanyavad (thank you) and namaste! “And yes, I tried a few vegetarian dishes and am now in love with all paneer (cottage cheese) dishes and bhindi (okra)”, he laughs. “Another memorable takeaway was the traffic in Delhi – chaotic, but everything works. That’s India to me! I often say that if you want to see another country go to Italy, Japan or Germany; but if you want to visit another planet, go to India!” he added with a smile.

Now that Minister Dominello is smitten by India, matchmaking mums in the local Indian community can have another go, and who knows, they may meet with success.