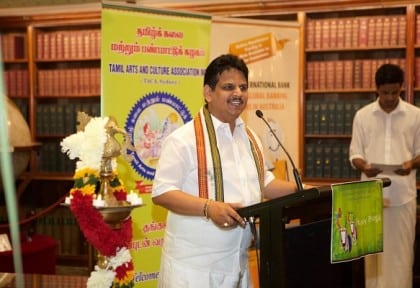 Australia is truly a melting pot of cultures; home to many varied ethnic communities of the world, the country has embraced diversity. True to form, the New South Wales State Parliament recently played host to the Tamil Arts and Culture Association’s (TACA) Pongal festivities.
The Jubilee Hall inside Parliament House was decked in traditional Indian décor, complete with nadaswaram music playing in the background, banana leaves, sugar cane sticks, mango leaves, kolam, and an ornate Pongal pot adorning the makeshift stage. It was not just the functional hall that dazzled in traditional decorations, with many guests and dignitaries, including some Members of Parliament, seen wearing Indian garb. Colourful saris, silk dhotis and beautifully crafted Indian outfits only added to the revelry.

Falling in the auspicious Tamil month of Thai, the four-day festival Thai Pongal, or Pongal, is a thanksgiving festival to the Sun God for a bountiful harvest. The event is celebrated by many Tamilians across the world, from Tamil Nadu in India, to Sri Lanka, as well as Malaysia, Singapore and Mauritius, among others.

TACA put together this event, in the heart of Sydney, to bring together the Tamil community to celebrate this important festival.
This is the second consecutive year of the celebrations being held at Parliament House and the second time turned out to be a charm for the organisers.

“This year, we are proud to have the support of Multicultural NSW for this event, and we hope to continue receiving such stellar support from them in the future as well,” said Anagan Babu, Secretary, TACA.
The Association’s Pongal festivities also extended to the Federal Parliament in Canberra. For the first time in Australian history, the Pongal festival was celebrated in federal Parliament.
“It was a monumental event for us and this was a proud moment to have national recognition for the Tamil festival,” said Babu.

In Sydney, the event began with the traditional lighting of the kuthuvilakku (lamp), as several Members of Parliament, including Dr Hugh McDermott, Member for Prospect, and Julia Finn, Member for Granville, did the honours. Guests were then treated to a skit by a group of youngsters who spoke of the significance of the festival and how it has changed over the years. The youth also spoke of adapting the festival while being away from their homeland, or the land of their heritage, while still maintaining the spirit of the Pongal festival.

What followed the skit was a true visual treat. A trio of dancers performed the traditional Kavadi Chindu in Bharatanatyam form. Another dance performance followed, depicting the beauty and pride of Tamil language and culture.

The event garnered plenty of support not just from the Tamilians in Sydney, but also from other Tamil community groups and many members of the NSW Legislative Assembly. The new Minister for Multiculturalism, Ray Williams addressed the gathering and spoke about the importance of celebrations like these in upholding culture and traditions, and passing on traditional values to the younger generations.
“Australia is enriched by all the different cultures and it’s the diversity that makes us special,” he added.

Many people associate this festival with a dish that shares its name. Pongal is a rice and lentil preparation made both in sweet and savoury versions, it is typically made as an offering, along with items fresh from the harvest, for the festival. At the end of the event, guests received a box of tasty pongal to savour.
This event brought out the beauty in diversity, showcasing an important festival for Tamilians who call Australia home.

- Advertisement -
Share
WhatsApp
Facebook
Twitter
Linkedin
Previous articleSaving an endangered bird – with tricks, tactics and love
Next articleThe ghosts of a literary Indian hill-station that haunt the writers of the present