A hockey great in town 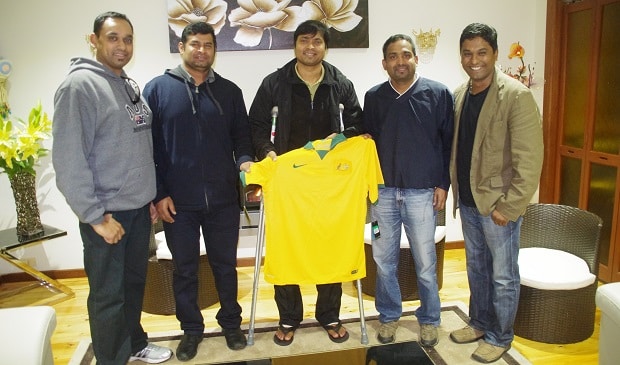 As the Soccer World Cup fever rages on, Adelaide’s Club India International SA Inc roped in support for the Socceroos from none other than one of India’s hockey greats.

That the Socceroos, after splendid performances against much better ranked teams, did not progress into the round of 16, was a different story. Club India International SA Sports Secretary Shelvin Roswan, Entertainment Secretary Nick Fernandes, Treasurer Sterling Silveira, executive committee member Dunstan Albert Morais and others presented the official Socceroos jersey to the former Indian hockey captain and wished him a speedy recovery.

Tirkey is the highest capped Indian player at 412 international matches. He played in the fullback position and was best known for his penalty corner hits as well as his defence, thanks to his tight marking skills near the goal post. He was forced to retire from the game prematurely due to ankle problems. He recently underwent surgery on both ankles at Sportsmed, and is currently recuperating here.

The former Olympian – Atlanta 1996, Sydney 2000 and captain of the team in Athens in 2004 – Dilip Tirkey was known for his stick skills throughout the world. In March 2012 he was elected unopposed to the Rajya Sabha.

Considered as the world’s best defender during his playing days, the former captain firmly believes he will be able to recover well from the ankle surgery and his first priority will be to coach the Indian hockey team.

Always in the thick of action while he represented the country, Tirkey took time out to speak to Indian Link.

“I still have a lot to offer to the game that has given me so much in life,” he said. “Once I am fit to move about, I look forward to taking on the role of coach. We need to groom youngsters, talented players and give them exposure. I want to coach them and share my experience”.

Tirkey, who made his debut in the Indira Gandhi Gold Cup in 1995, feels that his vast experience and tough play on the field as a dependable defender will be positive points that he can share with upcoming players. “In hockey, fast thinking and tackling the ball are the most important aspects of the game”, he emphasised.

“After I slowed down with my performance due to the ankle injury, which resulted in a down slide in my fitness, I took to imparting training to young tribal players in my home district of Sundargarh in Orrisa,” Tirkey revealed.

As a player, Tirkey considers India’s performance in the 2007 Asia Cup finals as the defining moment of his 15-year-long career. India defeated a strong Korea team.

At the recently concluded 2014 Hockey World Cup in the Netherlands, where defending champions Australia won the tournament after defeating the host country 6-1 in the finals, India lost to Australia, England and Belgium and had a draw with Spain. Tirkey believes this was primarily due to the inexperience of young players in performing at the world competition level, and a failure to cope with this fast-paced nature of the game.

With regard to the Indian Hockey League, Tirkey observed, “This is the best thing to happen for hockey in our country. It will help spot players and give them the desired exposure, plus of course the opportunity to brush shoulders with foreign players who are participating in the league”.

Still, he added, more needs to be done to popularise the game in the larger cities of the country.

Tirkey had a word of praise for current Indian men’s hockey coach, Australian Terry Walsh, for his strategies and moulding of the team. But he did say that ultimately it is up to the players who need to do their part on the field, which unfortunately did not happen in the last major world tournament.

As a sportsperson in the Rajya Sabha alongside cricket great Sachin Tendulkar, Tirkey feels his major responsibility in India’s Parliament is to work for the betterment of hockey as well as other sports. Yet he is equally motivated toward the development of India’s rural and tribal areas, with education as his primary objective.