A table for five-thousand, please 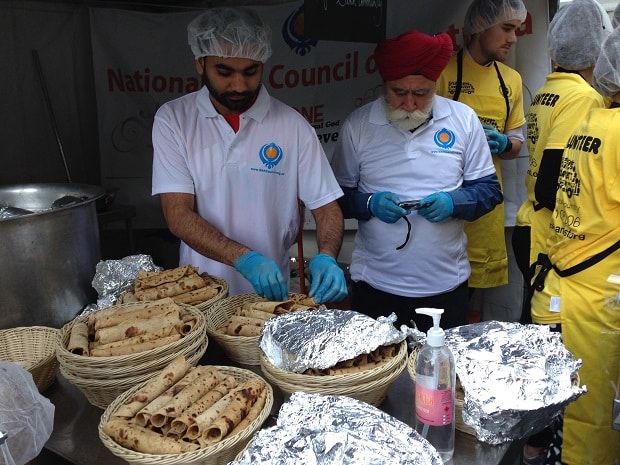 Recently, the Sydney CBD community gathered in Martin Place to share a meal at OzHarvest’s Think.Eat.Save. event. The main meal on offer was a traditional Sikh roti and curry lunch distributed by the National Sikh Council of Australia.

The event united some of the nation’s top chefs, politicians and celebrities to take a stance against wasting food by serving members of the public a free meal made from surplus produce that would have otherwise ended up as landfill.

Vice President of the National Sikh Council, Amarinder Bajwa, praised the unique Think.Eat.Save event as it enabled all people, rich and poor, to come and share a hearty meal together.

“It is a good platform to promote and share the Sikh culture,” he added, saying that volunteers had been working since 2:30am in order to serve 5000 rotis to the public.

The hard work certainly seemed to have paid off as lines at the roti stall never seemed to stop growing.

Ronni Kahn, who was named Australia’s local hero of the year in 2010, founded OzHarvest in November 2004.

After working in event management, Kahn became aware of how much food was being wasted and lobbied for legislative change that allowed surplus food to be donated to charitable organisations.

This is the second year the National Sikh Council partnered with OzHarvest for the event. A number of VIPs were present, including Greens representative Councillor Irene Doutney. She claimed that food wastage in Australia is, “untenable, unethical and unsustainable”.

“OzHarvest gives us the opportunity to turn our thoughts to our own food consumption, and helps us promote a sustainable food culture,” she said.

A panel of food enthusiasts joined the VIPs to discuss food sustainability and ways that regular people can change their attitudes towards throwing away food.

NSW Environment Minister Rob Stokes expressed his concern at the 30 per cent food wastage rate in Australia and compared it to the 900 million people in the world who are starving.

He claimed 70 per cent of the food that is wasted goes to landfill still in its packaging.

“It doesn’t even go to the table,” he said, claiming this is an indictment on Australian values.

Associate Professor Bill Pritchard from the University of Sydney spoke about the world’s “dysfunctional” process of food distribution, which results in under-nourishment in some people and morbid obesity in others.

Alexandra Ijadica, founder of Youth Food Movement, said the issue of food wastage is being raised more often as young people continue the conversation about where food comes from, having eaten from a packet most of their lives.

She promoted the message of ‘Go Buy Ugly’ that encourages people to buy produce from farmer’s markets rather than major supermarkets who reject produce on the basis that it does not look good and therefore will not sell.

Another thought-provoking notion was brought up by ‘sustainability legend’ Joost Bakkar.

“The companies that are making the most money are the vitamin companies yet we don’t even need the stuff in the first place”.

OzHarvest uses 23 refrigerated vehicles across Sydney to transport food and has delivered almost 28 million meals to those less fortunate.

Ronni Kahn told the crowd about a school of 50 children in Sydney who contacted OzHarvest, because they don’t have food to take to school and have minimal meals at home.

“This was not in Cambodia. This was 30 kilometres from here,” she said, “that’s where the rescued food goes”.

OzHarvest is partnered with the United Nations Environment Program (UNEP) and the UN Food and Agriculture Program.

“If food waste was a member state of the UN, it would be the third highest carbon emitter,” said UNEP representative Julia Dean. She was highly supportive of the Think.Eat.Save campaign as it draws attention to perfectly edible food “that never makes it from farm to fork”.

After enjoying their roti meal, two women praised the volunteers from the National Sikh Council and OzHarvest. “The food is really lovely…very delicious,” they said. “It is showing people that the food tastes the same, it just doesn’t look the same, and it shouldn’t be going to waste,” they added.

During her address to the large crowd that had gathered at Martin Place, each with a serving of curry and roti in their hands, Ronni Kahn thanked the 200 volunteers who organised and directed the event, and reaffirmed her commitment to making Australia the country that saves food.

“Together we can and must make a difference”.