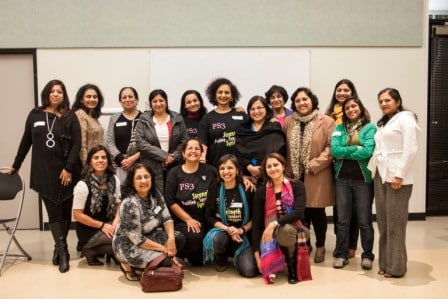 Any discussion that focuses on rethinking of leadership outside the masculine paradigm is bound to go through topics like gender equality, glass ceilings and work-life balance. These, and many other topics were shared recently at an informal forum organised by a group of enthusiastic, forward thinking individuals under the banner of PS3. The interesting and thought-provoking event was held at Sportlink in Vermont South, and was attended by a select group of women from the Indian community in Melbourne.
The participants who came from all walks of life shared insights, explored best practices and compared experiences with each other, offering fresh perspectives on traditional leadership and other issues that face women. Inevitably the discussion at times digressed into other topics that were not directly relevant, but were equally significant; however overall, it was good learning about what matters in women’s lives.
At the recent PS3 coffee forum the participants heard from Adriana Juan, a motivational speaker and life coach. Adriana shared her personal experiences of being a migrant in Australia, being away from her family, upheavals in her relationships and her subsequent struggle with depression. She spoke about how she took charge of her life and how she was liberated from her own fears. Adriana’s simple message was to go back to the basics and connect with yourself and others in order to support yourself. Her address provoked a few questions and answers. Adriana asked the participants to consider the fifty shades of their lives by outlining a model that included business, health, spiritual, emotional and financial wellbeing that could be used by them to map their own success.
The forum continued to discuss some of the hurdles (self-imposed and others) that women face in striving towards achievement, based on Facebook’s CEO Sheryl Sandberg’s controversial talk on why there are too few women at the top of organisations. Following the talk, the PS3 group invited everyone to get healthy and join them for their twice a month walks. The women were also requested to join the Mother’s Day Classic Fun Run/Walk to be held on May 12 to raise funds for breast cancer research. It was a commendable effort by PS3 to offer an environment of peers sharing experiences and drawing on a network to explore challenges. The discussion that ensued emphasized the importance of honouring strengths, innate capacities and unique perspectives of both men and women.
PS3 is an organisation created by Poonam Mehra, Smita Verma, Suman Chaudhary and Shalini Valecha to raise awareness about everyday issues that are faced by women. Besides the starting letter of their first names, PS3 also stands for their desired objective of offering positive support, strength and synergy to women. What started as a series of friendly discussions between four friends soon attracted more participation and has now turned into a regular event. The group has now grown in numbers and holds events once in every six weeks in various parts of Melbourne. Recognizing the efforts of the group, in 2011 and 2012 the Boroondara council granted them token funding to enhance the reach of PS3 into the community.

WATCH: When Shehanai and Violin go to Khandala