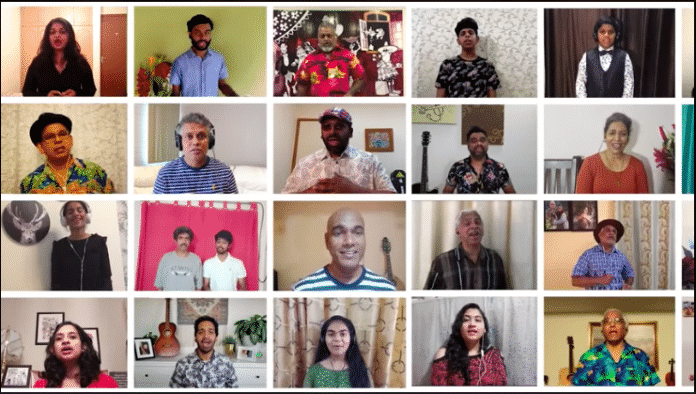 As if assembling a large choir isn’t enough of a task, imagine assembling 250 singers and musicians in different time zones across the globe for a virtual choir.

This month, that was exactly what the Global Goan Alliance & Network (GGAN) achieved when they banded together to create a song for Goans around the world to come together in honour of those facing the COVID-19 pandemic at the frontlines.

Australia was represented by Melbourne’s musicians including maestro Josefato Vales, his children Jovan and Mylene, Gerard Lobo, and his son Marvick Lobo.

“With the current scenario, it was not possible to plan the World Goa Day celebration which usually happen during the month of July and August. It was the founder of World Goa Day, UK-based octogenarian Rene Barreto, who pitched this idea and the event became a reality,” Gerard Lobo told Indian Link.

The process took six weeks of coordination, setting up a core team working across time zones to create the Global Virtual Choir. Lobo roped in the services of another versatile musician Josefato whose contribution was set as a base for the 2-and-a-half-minute video.

Once the song came together, they were able to round up around 250 people who wanted to sing or play an instrument for this virtual choir. They selected the best global musicians who could record audio with studio quality. The song was officially released on 20 June.

While the project was the brainchild of key GGAN members Rene Barreto, Savio Ribeiro, Gerard Lobo, Maria Gomes Fernandes, Floscy Gracias, Samantha Pashaa, and Perry Goes, the team acknowledged all singers and musicians on the project.

“This was an opportunity to connect and acquaint with people in the diaspora and work in unity with a true spirit of Goemkarponn. It was also a huge treasure trove of talent explored across various continents, regions and varying age groups of people bound by one common purpose during these times of adversity,” Maria Gomes Fernandes, a key member of the GGAN, explained.

She added, “We wanted English, Portuguese and Konkani songs which would be attractive to Goans and non-Goans. It had to be familiar and not about COVID, but to promote solidarity among Goans across the world.”

According to Perry Goes, another GGAN member, diverse Goans from different parts of the world reached out to each other in this period of lockdown and despair, finding their cultural roots bind them all together.

“We wish that these bonds grow stronger as we emerge from this pandemic. We take this opportunity to recognise and thank all those in the frontline fighting this pandemic,” Goes said.

Since the song’s release, the Global Goan Virtual Choir looks ahead at more projects and collaborations.

“The Global Goan Virtual Choir’s short medley of Konkani, English and Portuguese songs were recorded by singers and musicians in the safety of their homes, before sending them to us. This is the first of many more projects in the pipeline, but we need people to join hands with us. First, to celebrate this video and sharing it with others,” he said.