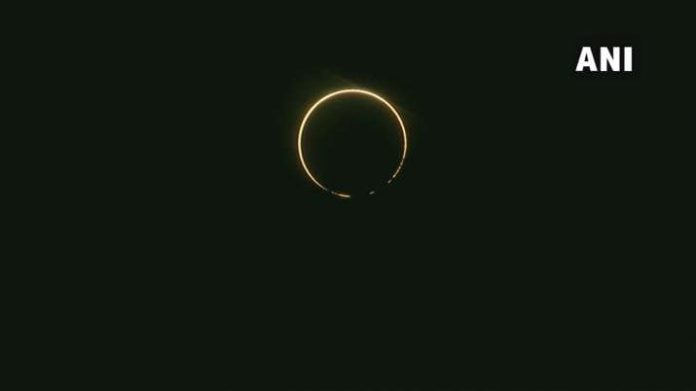 India on Sunday 21 June witnessed its deepest annular solar eclipse or ‘surya grahan’ of this century for over three hours with its peak in the noon giving the appearance of a “ring of fire” for around 30 seconds along a narrow corridor running through Chandigarh, Delhi, Shimla and Jaipur.

An annular solar eclipse occurs when the Moon covers the Sun’s centre, leaving the Sun’s visible outer edges to form a “ring of fire” or annulus around the Moon.

This was the last annular solar eclipse of the decade. With the next solar eclipse visible in India 11 years away in 2031, this marked a major astronomical event. The solar eclipse started from around 9 a.m. across the Indian map as the Sun, the Moon, and the Earth came in a straight line, and the country witnessed the ‘deepest’ annular solar eclipse in over a century and the third eclipse even for this year after first two lunar eclipses took place in January and June.

The eclipse lasted till 2:28 p.m. While most of India witnessed a partial solar eclipse, certain places in Haryana, Uttarakhand and Rajasthan observed the phenomenon of Baily’s Beads (arcs of bright spots common in annular eclipses). These include Dehradun, Kurukshetra, Chamoli, Joshimath, Sirsa and Suratgarh.

Delhi, Mumbai, Kolkata and Chennai -the four metropolitan cities of India – observed the eclipse between three hours 19 minutes and three hours 28 minutes. In the national capital, the eclipse began at 10.20 a.m. and ended at 1.48 p.m., with the maximum phase occurring at around noon.

Astronomers said it is a fourth super rare hybrid eclipse which is a mix between an annular and total solar eclipse.

The ring this time was very thin, as the Moon covered over 98.8 per cent of the Sun, making it the deepest annular eclipse of the century in India. The COVID-19 pandemic has dampened the plans of many eclipse chasers trying to capture the event due to curbs on public gathering

However, many used safe techniques to observe the solar eclipse by using a proper filter like aluminised Mylar, black polymer, welding glass of shade number 14, or by making projection of the Sun’s image on a white board using a telescope as advised by the Ministry of Earth Sciences (MoES).