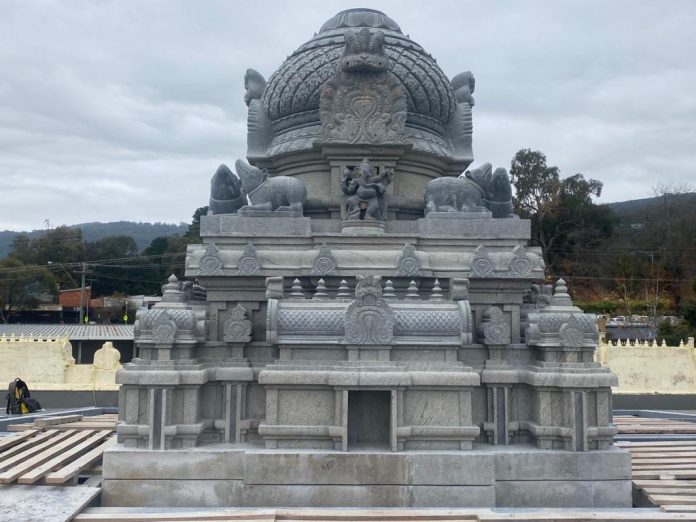 Much to the disappointment of thousands of devotees, the latest COVID-19 lockdown in Melbourne has caused delays in the consecration ceremony (Maha Kumbabhishegam) of the largest Hindu temple in the Southern Hemisphere made with handmade granite stones.

Dedicated to Hinduism’s most-loved deity Ganesha, the Sri Vakrathunda Vinayagar Temple in The Basin recently underwent a historic transformation in its architecture, with granite used for all eleven of its shrines.

Granite is typically used for the construction of Hindu temples and the decorations, as well as the deities within.

“We are proud to say our temple now becomes the largest Hindu temple in Victoria and in the Southern Hemisphere built in the traditional style of our ancestors,”  Balaa Kandiah, the president of the Melbourne Vinayagar Hindu Sangam (MVHS) told Indian Link.

Granite is a highly durable stone, making it ideal for temple use as it can last thousands of years. It is also scratch proof, very strong and siliceous. But ancient Hindu temple architecture lists that granite is chosen as it is the only stone where all five elements of nature – earth, water, air, fire, and space – can be found.

“It’s a kind of ‘living stone’, so our statues capture the vibrations of the music, the chanting and the prayers conducted within the temple,” Shan Pillai, Secretary of the MVHS said.

More than 1,200 stones were used for this project, with the main shrine of Lord Ganesha alone built from 17 layers of almost 400 granite stones.

“All the granite used in the temple was sourced from a single quarry, in Namakkal near Salem, Tamil Nadu,” he explained. “This was done to ensure uniformity in colour and texture. The stones varied in size and weighed between 200kg and 6 tonnes each.”

Nearly 100 artisans worked on the statues, in three different sites in Tamil Nadu.

“They took a year to create – cut and carved in intricate designs. It then took six months to assemble here in Australia.”

Besides the pyramid, Dravidian temple architecture requires that the building be contained within a compound wall; have a gateway in the centre of the front wall; a raised platform to enter the main door (mandapa); sculptures of fierce dvaarpaals or sentries guarding the main door, and a cupola to crown the pyramid at the very top (vimanam or shikher).

All these elements at Lord Ganesha’s newest home in Melbourne, are built in granite.

Balaa observed, “The original plan for granite was restricted to the main shrine moolasthanam, but so overwhelming was the support from our members and devotees, that we decided to go for granite for all eleven shrines in the temple. Taking in to account the Australian works, which included, new roofing, new steel structure, new flooring the various extensions both at the rear and for the Vasanthamandpam, this raised our costs from $2.5 million to $4 million.”

It also became a mammoth task for Puru.

Shan described seeing the designs on paper early on. “Each stone was numbered; its position, clearly specified, and its dimensions precisely listed. It was a massive jigsaw puzzle. I couldn’t even begin to imagine the amount of thought that went into it all!”

Balaa added, “Now that we have seen the completed structure though, we can’t tell where the stones meet, it all looks like one single piece.”

The joining process is the same as that used by our ancestors, Puru described. “The stone is hollowed out so that the load falls to the sides. The edges are made coarse, and ‘milk’ (paal) made up of very fine cement and water is used as the binding agent.”

Puru’s drawings and designs for what would become the Sri Vakrathunda Vinayagar Temple were sent to IIT Madras where the calculations were verified and validated; the certifications provided were approved by the Australian authorities.

“Apparently the structure can withstand any earthquake,” Shan revealed.

What challenges, if any, came up in the development process?

“A major challenge was sourcing the granite,” Puru revealed. “The Indian government is restricting the amount of granite that can be exported. Our shipments were among perhaps the last few that could get out.”

Quarantine service was another road bump, Shan added. “As the carved structures were loaded on to trucks in India for the transport, heavy floods hit the area. When the shipment arrived here, it was covered in leaves and mud. It all went into quarantine, and temple volunteers had to go out to clean the entire lot. It was quite an experience, starting at 4 am each day!”

“Luckily the wood was ok,” Balaa offered. “Quarantine regulations had specified we use a particular type of wood packaging. It turned out to be the most expensive kind, so our costs went up significantly. But it was God’s wish…”

The Ganesha temple’s grand new makeover puts it in the same league as NSW’s Helensburgh Temple and Murugan Temple which were built along similar lines – with traditional artisans designing in India or coming here to create the statues and pillars. Yet it would perhaps prefer to be in the same league as Adelaide’s Ganesha Temple, which was granted heritage status in 2013.

Would this Ganesha temple seek heritage status too?

“It is certainly an idea we have toyed with,” Shan admitted. “But that is in the future.”

Originally scheduled for June this year, the consecration is now put off till the end of COVID restrictions.

READ ALSO: A history of the Sri Vakrathunda Vinayagar temple