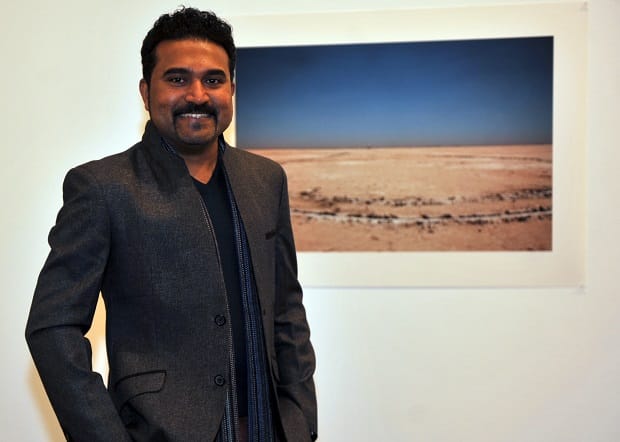 In a country that characteristically brims with over crowdedness, congestion and poverty, there are still landscapes that exude immobility, tranquillity and seclusion. In his first major solo exhibition in Australia, Dust, Gigi Scaria explores this co-existence in India, contrasting the built environment with vast, degenerate spaces and remnants of decay. He examines the relationship between the “social spaces” that millions of people occupy, and the distant landscapes many seek for spiritual fulfilment.

Scaria is usually associated with complex images of megacities that are the result of economic and construction booms, where vehicles, buildings and telecommunication lines are emphasised, which reflect his concern with the rapid excavation of the land.

“When I came to Delhi I began thinking about its impossible systems, size and mechanisms,” says Scaria. “That was when I discovered that these are huge issues… it’s troubling that we can’t treat our environment properly”.

However, Dust takes a different approach; it pictures the geography of the Indian landscape in its raw and glorified form, where nature seemingly overpowers population.

“It can feel as if I have depopulated the spaces, although I haven’t actually ‘done’ anything to them. If there are no people in a photograph, I haven’t ‘deleted’ them, they were never there’, says Scaria.

The exhibition features a large-scale painting, a video-sculpture installation and large-format immersive photographs of sandy plains, white salt lakes, and the cracked mud of droughts past. What unifies the collection of works are the crisp horizon lines, unnamed locations, the man-made elements, imagery of sedimentary textures; dune, dust, salt, sand, silt, sludge, and the enormity of the landscapes. These elements suggest landscapes that could be anywhere, such as Russia, or a part of the United States, South America or even the arid heartland of Australia.

While Scaria has never ventured into the Australian outback, he has gained familiarity and interest with Australian cities while residing in Melbourne in 2012 as a Macgeorge Fellow during the Australia-India Year of Friendship. During this time, he exhibited Prisms of Perception at the Ian Potter Museum of Art and travelled around Victoria, and by road to Canberra. He took inspiration from the vast geography of the regions, culture, human interventions in the land as a result of the gold rush in Victoria, and from histories of migration.

Scaria naturally compares the Australian landscape with the landscapes of his past, or childhood memory in his home state, Kerala which is densely settled, but also lush and tropical. “When you explore places that are distinctly different, which have no connection with your past, you compare ‘your’ landscape with the new landscape in front of you,” says Scaria. “We make this comparison when we move from one city to another, one territory or nation to another”.

His photographs of “India’s outback” are a response to the enormous Australian landscape.

Dust illuminates the artist’s travels to inhospitable locations, including the Rann of Kutch, a salt desert situated on India’s south-western border with Pakistan; and the sands that meander around Jaislamer, a city in the Thar Desert in Rajasthan, also on India’s border with Pakistan. Scaria visited these remote places upon his return home from Australia, where he captured approximately 700 photographs, in which 17 appear in the exhibition. Scaria has ‘beautified’ the sites of dispute, focusing attention on his solitary retreat and sensory experience as an adventurer, rather than imbuing the photographs with any political tenor. They reflect an introspective search, the passing of time and the power of nature and isolation.

Put simply, in Scaria’s understanding of the world, “you travel best when you put away the map, and embrace the land most completely and find the way only by losing it. This is where the mystery happens”.

Indian curator Ranjit Hoskote poetically describes the visual experience in his essay on the exhibit, as “The crunch of boots on salt-encrusted ground; the cloud mirrored in brackish water; the onrush of wind barely stopped in its track by rock outcrops; the expanse of drought-fissured fields”. Standing amidst Scaria’s images, that is precisely what you feel, captivated in their spatial and aural expanse, lost wandering in their ambiguity, yet connected to their hint of familiar spaces.

Many of Scaria’s photographs are devoid of people, yet they convey evidence of massive industry, depicted in the cultivation of salt, imagery of power lines and heavy machinery. Growing up in his village in Kerala, Scaria was unaware of the scale of India’s cities until he moved to New Delhi to study a Master of Arts at Jamia Millia Islamia in 1995. Unsurprisingly, the sprawling city of New Delhi became the impetus for much of his art that examines pressing issues in contemporary India; extensive development and human dislocation, amid the voracious force of the nation’s rapid urbanisation.

Dust is also a testament to Scaria’s ongoing relationships with the Ian Potter Museum of Art and with the Australian art industry. In January 2013 Scaria was a participant in the Australia India Institute artists’ retreat in Jaipur, India. A celebrated contemporary Indian artist, Scaria represented India at the 54th Venice Biennale in 2011 and has participated in an admirable number of international solo and group exhibitions, and prestigious residency opportunities in India, Germany, America, Hungary, the Republic of Korea and the Republic of Trinidad and Tobago. Projects such as Dust provide critical opportunities for sharing cultural knowledge among a new generation of Indian artists with Australian communities.

Dust is at the Ian Potter Museum of Art, University of Melbourne, from September 18 to February 2, 2014.

Tales from the middle