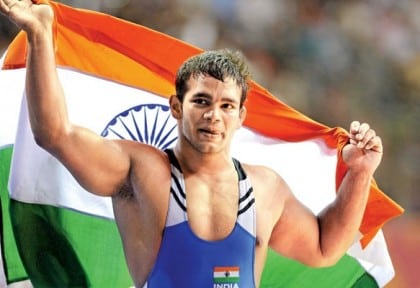 Narsingh Yadav is scheduled to open his Rio campaign on Friday

If the failure to open its account in the Rio Olympics medals tally wasn’t enough, India’s hopes were further dampened on Tuesday after the World Anti-Doping Agency (WADA) appealed in the Court of Arbitration for Sports (CAS) against the clean sheet given to wrestler Narsingh Yadav.
Narsingh, who was exonerated of doping charges on August 1 by the National Anti Doping Agency (NADA) terming him “a victim of sabotage done by a competitor”, is scheduled to open his Rio campaign in the 74 kilogram freestyle category on Friday August 19, a day after the hearing is scheduled to take place.
“Yes, WADA has appealed the verdict on Narsingh to CAS, which will hear both parties on Thursday August 18,” Brij Bhushan Sharan Singh, Indian wrestling’s governing body president, told IANS.
“Our lawyer has already acknowledged the WADA letter. We will put up a strong defence for Narsingh. He has a good chance of getting cleared,” he added.
But WADA’s appeal just two days before the bout may seriously affect his chances, considering the whole drama that unfolded starting with the legal tussle with two-time Olympic medallist Sushil Kumar over representing the country in the 74kg freestyle category followed by the doping saga.
The Mumbai grappler was preferred over Sushil by WFI to take part in the Games, that fuelled a major legal battle between the two wrestlers.
Narsingh, who bagged the quota with a bronze medal finish in last year’s World Championships, first returned positive for a banned steroid following a dope test on June 25 by the National Anti-Doping Agency (NADA), before being cleared on August 1.
The Wrestling Federation of India (WFI) also communicated to the world’s apex wrestling body, the United World Wrestling (UWW) that NADA has cleared Narsingh of all the doping-related charges and the 26-year-old would be re-included in the team for the 74kg competition.
The UWW gave the green light to Narsingh for participation on August 3. However, Narsingh’s route had to clear the final WADA hurdle to compete, which reviewed the NADA panel verdict and challenged it at CAS for further deliberation.
To add to the disappointment, during the day wrestler Hardeep Singh crashed out of the men’s Greco-Roman 98 kg 1/8 Final after losing to Turkey’s Cenk Ildem 1-2 on points.


Hardeep’s elimination has brought down the curtains on India’s campaign in the Greco-Roman category after Ravinder Khatri lost to Hungary’s Viktor Lorincz by technical superiority in 85kg on Monday.
India will now pin its hopes on the freestyle wrestlers led by London Olympics bronze medallist Yogeshwar Dutt in the 60 kg category, Narsingh (subject to his clearance) and Sandeep Tomar in the 57kg category.
Besides them, the women’s field comprising Vinesh Phogat in 48kg, Babita Kumari in 53kg and Sakshi Malik in 58kg categories will also aim for a podium finish in their respective categories.
Today, shuttler Kidambi Srikanth will face the enormous task of beating two-time Olympic gold medallist and five-time world champion Lin Dan of China in the quarter-finals of the men’s singles event.
World No.11 Srikanth stunned World No.5 Jorgensen 21-19, 21-19 in 42 minutes at the pre-quarters stage. And the stakes will be high as Srikanth will aim to prove that he has really come of age.
It will be the fourth meeting between them with the Chinese dominating twice, but Srikanth had an upper hand at the last meeting at the 2014 China Masters.
Among others, teenage golfer Aditi Ashok will look to add another fine chapter to her nascent career when she tees off at the Olympic Games on Wednesday.
Aditi, 18, has been a sensation ever since she won the qualifying finals to earn a full card on the Ladies European Tour (LET). And she’s done well to hold herself in the big league.
Aditi will play alongside Spain’s Carlot Ciganda and Russian Maria Merchenova.