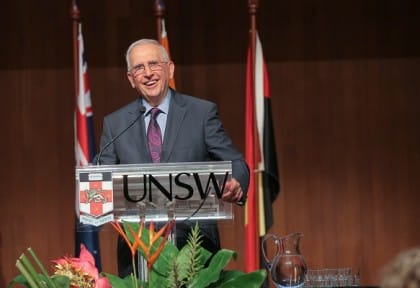 
The theme song of the popular Australian soap opera Neighbours might seem far removed from the ideals of the great Indian freedom fighter and philosopher Mahatma Gandhi. However, this year’s Gandhi Oration, presented by social researcher and author Dr Hugh Mackay AO, emphasised the need for us to be better neighbours, friends and members of the community if we are to combat the rising rates of anxiety and health issues being promulgated by an increasingly fragmented, individualistic society.
Reflecting on contemporary Australian life in light of Gandhi’s legacy, Dr Mackay’s address, titled ‘The state of the nation starts in your street’, implored us to undertake small actions to engage with others and make a meaningful difference to one another. And his message certainly struck a chord.

The Australian dream of egalitarianism, a fair go, harmony and cultural diversity is slipping away amidst the rise of individual desire, suggested Dr Mackay. There has been a global erosion of commitment to the collective.
As a nation in the grip of epidemics of anxiety, depression and obesity, with more than a million Australian children living in poverty, and a massive under-employment problem, there has been a disturbing retreat from an open, progressive society with a trend towards aggression and violence.
Dr Mackay proposed that this could perhaps be a reflection of growing income inequality, as “inequality certainly breeds insecurity”, though our declining respect for community, organisations and institutions was a more likely factor in our growing national apprehension and disillusionment.
But as Dr Mackay told us, “I suspect Gandhi would have reminded us that if we lose our capacity for unconditional compassion, if we lose sight of our true nature as members of a society, if we focus too much on our own wants, our own entitlements, our own gratification, with little regard for the needs and wellbeing of others, there will be an inevitable threat to our mental health.”

Referring to his decades of social research, Dr Mackay described how a sense of belonging is fundamental to our wellbeing, “‘We don’t know our neighbours’ has become almost a cliché of contemporary urban life.” Indeed, many in the audience thought, however fleetingly, about their own neighbours.
This concept of feeling like a stranger in your own street is bound to breed a sense of insecurity as being isolated and alone is antithetical to the human condition, Dr Mackay said. “When we lose sight of our role as neighbours, the health of the neighbourhood suffers.”
Citing scientific evidence, statistics and psychological theory, Dr Mackay outlined how changing patterns of marriage and divorce, a plummeting birth rate, the increase in work hours, and rapidly shrinking households are leading to greater social isolation. These issues stand alongside an obsession with privacy and security amidst increasing high rise and high density housing, which is almost at odds with the altered perception of privacy and identity born of our dependence on social media and technology. These are all factors generating a more fragmented, more competitive, less cooperative society, exerting great pressure on the stability and cohesiveness of communities.

Dr Mackay suggested the increasing rates of anxiety and violence in our society are reflections of our inability to cope with the changing world order. He railed against powerful propaganda in the form of mass marketing to the consumer from the “happiness industry” whereby we believe we have a right and are entitled to be happy, “If you pursue happiness, it will elude you.” The validity of the emotional spectrum is what it means to be human, Dr Mackay said, and we can only experience happiness in contrast to the feeling of other emotions. But it was not sermonising. Dr Mackay infused his address with jokes, humour and cheeky asides, while holding up a mirror to Australia’s soul.
“Our identity depends on the groups we belong to,” Dr Mackay said. “We are people who will shrivel up, emotionally if not physically, if we are not nurtured by the experience of sharing the lives, and even sharing the pain, of those around us.”

As the growing threats of climate change, terrorism and a major economic disruption loom over us, our growing sense of vulnerability and fear seems to be forcing individuals into a state of self-absorption, denying us the communitarian need of civic responsibility.

But, as Dr Mackay suggested, “Goodness is inherently about responding to other people’s need of our kindness, charity, compassion, respect… our love.”

In a time when we are disillusioned with the political elite, rather than relying on a strong, elected leader, as individuals we need to interact with one another and rediscover our commitment to basic morality – being kind and respectful to each other, no matter our differences. This is how we defuse violence and hostility.
It was a basic, simple truth he was telling us, and it stirred a palpable shift in the audience. It was like a recap of a lesson that we had all learned long ago, but somehow forgotten in recent years thanks to our complicated lives.


Invoking Gandhi’s wisdom, Dr Mackay reflected on the Mahatma’s premise that when we find ourselves in conflict with someone’s ideas, it is the conflict itself that is our opponent, not the other person. At its core, Gandhi’s philosophy was about replacing the force of violence with the combined force of truth and compassion, or ‘soul force’.
We should expand the notion of ‘love thy neighbour’, by reinterpreting what we mean by ‘love’ and what we mean by ‘neighbour’, proposed Dr Mackay, to include being kind and compassionate to everyone, even those who are different or whom we disagree with.
A truly civilised person renounces violence and revenge in favour of forgiveness, said Dr Mackay.
“We build a better society by responding to bad behaviour with good behaviour; by responding to ugliness with beauty; by responding to treachery with integrity; by responding to lies with truth,” he said.
With a general decline in trust in contemporary Australian politics, or a decline more broadly as evidenced by the rise of Trump and the Brexit, there is a need to look inward at ourselves and our behaviour, and take matters into our own hands.

Espousing a basic tenet of ‘thinking global by acting local’, Dr Mackay encouraged us to be more generous with ourselves and our time, and be masters of technology, not its servants. Get connected: that’s the lesson we all took home that day. And not in a social media kind of way.

“We can have a powerful influence on the communities we belong to,” Dr Mackay said. “How we contribute to these miniatures of life will help to determine the big picture.”

We all know how to act like good neighbours in the event of a tragedy or crisis, and we see examples of this regularly; the challenge is in learning to be a good neighbour in everyday life. “If enough of us start living as if this is the kind of society we want it to be, that’s the kind of society it will become.”
As Gandhi put it, “You may never know what results come of your actions, but if you do nothing, there will be no results.”
Photos: Maja Baska/UNSW
For more photos click here