Exciting times ahead for Indian banking 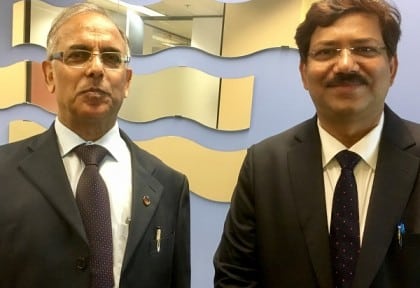 Within five to ten years, it is possible that banking in India will be largely online or through mobile, and there will be fewer ATMs.
This was the vision shared by one of India’s most senior and respected bankers, Vinod Kathuria of the Union Bank of India, during his recent visit to Sydney.


Union Bank is one of the largest government-owned banks in India with assets of US $13.45 billion and over 4,300 branches including overseas offices and representative offices in Hong Kong, Dubai, Antwerp, Sydney, Shanghai, Beijing and Abu Dhabi.
In town to congratulate local head Pankaj Kumar on the first anniversary of the Sydney branch, Kathuria was excited about the progress made Down Under.
“Within a year, we have done business of over US $200 million which is a wonderful achievement for our small team here,” he told Indian Link.
Union Bank’s local CEO Pankaj Kumar is proud of this achievement as the bank has worked hard in making inroads in the local Australian and Indian businesses.
“We do offer deposits for non-resident Indians in India, but our local loans are available to small and medium enterprises in Australia. It is our pricing and great customer service which wins us our clients,” Kumar said.

Speaking about global matters, Vinod Kathuria acknowledged that increasing interest rates in the United States will encourage countries to follow protectionist policies and also depreciate currencies and earn more foreign exchange.
“Five or 10 years back, the talk was more liberalisation; now it is about protectionist options, which is not good for an efficient global flow of goods and services,” he said.
Kathuria also expressed concern about global geopolitical risks such as North Korea and Syria. “The re-emergence of a cold war situation between the US and Russia also adds to global risks,” he said.
From a banking perspective, the threat of cyber terrorism is very real. “Not only in India, but globally, this is a big problem for all banks and billions of dollars are being stolen. We all need to work together to fight this type of terrorism,” he said.

On demonetisation, Kathuria said the process will help move India into digital channels for banking and, as monies have flowed into the banking system from cash systems, these funds will be better applied.

“Many of the employees in Union Bank worked hard and met the challenges during the days of demonetisation,” he said.
On a domestic note, Kathuria is optimistic about growth in India.
“Last year the credit growth was about seven per cent; in the current year, due to good government policies and how my bank is working, we can get up to 10 to 12 per cent credit growth.”