Australia Day Honours 2017: Getting involved with the wider community 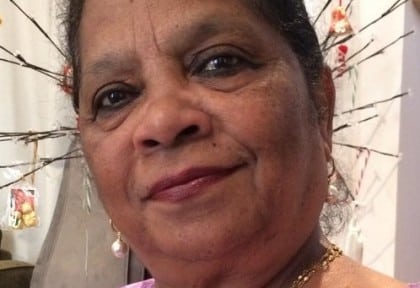 Philomena Docherty OAM: For service to the community through a range of organisations

The congratulations are pouring in from all directions as we speak with Philomena Docherty about her Australia Day honour. She claims she is grateful to all the “little fairies” that worked behind the scenes to make it happen, and although she is looking forward to the investiture in April, she intends to remain the |same Philomena with no change” after receiving her new title.

The Melbourne-based Mrs Docherty was felicitated for her community service with organisations such as the Royal Flying Doctor Service, Lioness Club of Camberwell, Liberal Party of Victoria, Mothers Auxiliary Group De La Salle College, St Cecilia’s Parish, Jambudvipa Youth Association for Indian Arts and the Bharatam Dance Company.
Philomena hails from Chennai where she met her husband, Australian born and raised, Bernard Docherty. They were both involved with the Young Christian Workers (YCW) movement that aims to create an intercultural society where solidarity and justice prevail. Bernie was in India for three years as part of YCW and he returned to Australia with 20-year-old Philomena as his wife. They stayed in Moorabbin with Bernie’s mother, initially, till they moved to live in Glen Iris, Melbourne.
According to Philomena Docherty, Australians welcomed her with ‘open arms’ when she arrived here to live with her husband and his family.
“I came to Australia in 1963 when the White Australia policy was yet to be officially abolished,” she recounts. “I came with trepidation but no hesitation to live with my mother-in-law who proved to be marvellous. She guided me and made it very easy for me to settle in.”

Talking about her early days, Philomena remembers those she met as “friendly, sincere and easygoing”.
“I feel people who migrate to Australia should become involved with the larger community rather than restricting themselves to groups with similar race, religion or social background,” she advises.
The couple went on to raise their three children giving them a deep understanding of both Indian and Australian heritage, which enabled them to entwine the two cultures and embrace the best of both.
According to Philomena’s daughter, Ambika, during the early years of adapting to her adopted country, Philomena fully realised that cultural exchange was necessary.

She became a self-appointed ambassador for India, and was invited to speak at many occasions on India and her life there. Australia was still in its early stages of dismantling the White Australia Policy, and there were literally only a handful of other Indian families living in Melbourne.

Indian food was not easily available so Philomena and Bernie started an Indian catering service in 1970. In 1971, Philomena was the manager of the Indian restaurant as part of Gini’s restaurant in Toorak. Following this, in 1972 she was appointed by the Government of India as Manager of the Indian Tea Centre in Melbourne city. As part of their catering business, Philomena and Bernie conducted Indian cooking classes and often took the students on guided tours to India.
Bernie’s family were always great supporters of the Liberal Party and Philomena joined their women’s section in 2000 as member, supporter and fundraiser. She was the co-founder and vice-chairman of their first multicultural branch in Victoria.
Philomena’s accomplishments are diverse and over the years she has garnered enormous response and support for her chosen causes. A natural leader, she is both inspired and inspiring, possessing a great passion that drives her in everything she does.