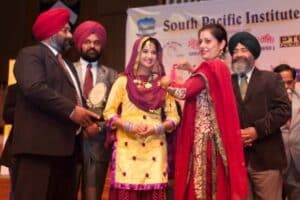 18-year old accounting student Manpreet Grewal from Deakin University took away the title of Miss Punjaban Australia 2012 at a unique pageant held in Robert Blackwood Hall in Monash University recently. There was not a single skimpy outfit to be sighted at this event, nor any trite statement heard on the need to save the world and help the under-privileged. Instead, the contestants were seen in traditional Punjabi outfits with their heads covered with a dupatta (traditional scarf) at all times. Instead of mouthing stereotypical platitudes on how to save the world, the participants focused on celebrating and sharing their culture with the world.

The scope, history, sophistication and complexity of Punjabi culture is vast, and the Punjabi diaspora plays a big part in rejuvenation of its culture. Having settled in different parts of the globe, the contributions of Punjabis reflect their personal experiences in foreign lands. By expanding tradition and incorporating the influences from their new contexts, Punjabis are mostly happy and willing to share their heritage. 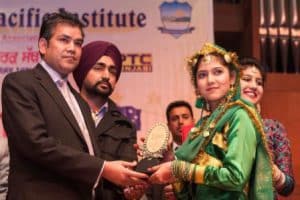 It was this confluence of Punjabi philosophy: via music, education, poetry and values, that was witnessed at the Miss Punjaban Australia 2012 event. It was a pageant that celebrated heritage and culture over beauty and glamour. Not that there was any lack of beauty among the ten gorgeous participants. While a majority of the young ladies were from Melbourne, a few also travelled from Brisbane and Canberra to display revelatory knowledge of Punjabi heritage. The event was organized under the aegis of Jasmer Singh Dhatt, chairman of Sabhyacharak Satth Punjab, with the support of The South Pacifc Institute, Melbourne.

The first segment of the Miss Punjaban Australia 2012 was a solo dance round, followed by an individual talent round, heritage round and group dance (teamwork) round. Music is an integral part of Punjabi culture whether it is a celebration, contemplation or sorrow, and not surprisingly, all the contestants chose to perform to Punjabi music for nearly every segment. The bhangra and gidda quotient was dominant throughout the very long evening.

Dr. Preetinder Grewal was responsible for anchoring the event accompanied by Mrs. Harleen Sohana. While Grewal added some robust humour to the evening, Sohana resorted to endless poetry. Black Saturday survivor Charnamat Singh from Kinglake was also invited to share his views and homilies with the audience. All the sponsors and supporters of the event were officially acknowledged with a memento.

In a contest that claimed to explore both the soorat (outer beauty) and seerat (internal beauty) of the contestants, Parminderjit Waraich from Brisbane was declared the first runner up and Gagandeep Kaur from Melbourne took away the second runner up title. The Miss Punjaban Beauty pageants are multi-tiered, and local competition feeds into the larger competition. Australian winner Manpreet will go on to participate in the semi finals to be held in Chandigarh, India and if successful will attend the finale to be held in Ludhiana in November this year.