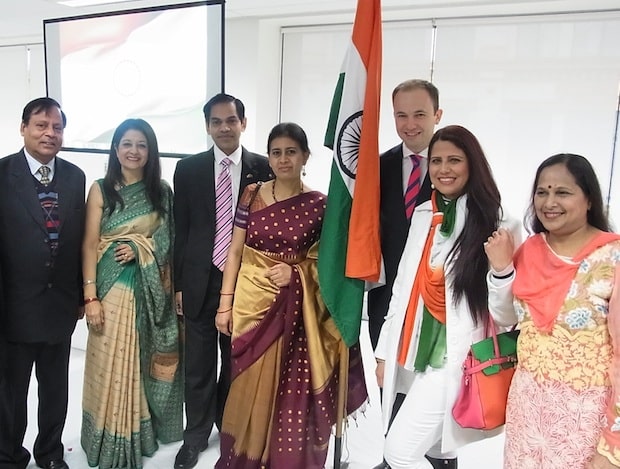 Over 300 people gathered at the new as-yet-unfurnished premises of the Indian Consulate in Sydney’s CBD to mark India’s Independence Day.

Consul General Sunjay Sudhir unfurled the Tricolour, led the gathering in a rendition of the national anthem, and read out the message of the President of India on the occasion.

The President’s missive began with a congratulatory note on having reaffirmed the power of our democracy, by changing governments this year through a peaceful electoral process. The economy was growing slowly but surely, he noted also, sensing “signs of revival”. However, he warned against intolerance and violence as a betrayal of the letter and spirit of democracy, slamming those who believe in the “poison drip of inflammatory provocation”.

The President then went on to deliver a proverbial ‘slap on the wrist’ by pointing out our shortcomings in a list of areas: our lack of cleanliness and care for the physical environment; the failure of our educational institutions “to provide quality education and inculcate the core civilizational values of love for motherland, compassion for all, tolerance for pluralism, respect for women, performance of duty, honesty in life, self-restraint in conduct, responsibility in action and discipline in young minds”, and for our democracy becoming “vulnerable to rash excess… Should not Parliament again become the great hall of sombre thought and well-debated legislation?”

To end, he sent out a call to action: Sidhir bhavati karmaja, he observed, “Success is born of action”.

The CG’s own personal message added to the festivities of the morning when he quoted poet and lyricist Sahir Ludhianvi and spoke about the deep bond which Indians will always have for their motherland. He observed that in his various interactions with the local community, their desire to participate in Indian activities in Australia was refreshing.

Helping the Indian community mark their national day, were many mainstream figures. Liberal Party MPs such as Geoff Lee and Matt Kean, and Labor Party leaders such as Michelle Rowland, friends of India who are regulars at community events, were present this time round too.

Interestingly, the festivities this year were not held at the CG’s official residence as in previous years, but in the city, early on a working day. However it did not deter attendees; rather it gave an opportunity for many to attend, as access to the city is easier.

For Consul General Manika Jain, it was the start of a busy day no doubt.

Melbourne’s Indian community bursts into a spate of activity around mid-August, with a number of high-profile events to mark Independence Day. The first of these, quite fittingly, is the flag hoisting at the Indian consulate at 344 St Kilda Rd.

A crowd of about fifty had gathered. The CG unfurled the Indian national flag as the members of the Indian community collectively sang the national anthem. She then read out the message of the Indian President to his countrymen.

Special attendees this time around were the members of India’s AFL team, who were due to play their important match against Pakistan the next day in the Dosti Cup.

Indeed, over chai and snacks, the discussion was all about the AFL International, which took over the imagination of the community this year as it welcomed the subcontinent teams.

Despite being a gloomy Friday morning with a few spells of rain, the 68th Indian Independence Day witnessed people from all walks of life – students, senior citizens, office-goers, even officers of the Queensland Police Service – gather at the Indian Consulate in Brisbane.

The Indian flag was hoisted at 9am on the dot by Archana Singh, Honorary Consul of India for Queensland, along with Prof Sarva-Daman Singh, her predecessor, followed by the Indian National anthem that left a few teary eyed.

Speaking on the occasion, Archana Singh said, “Our greatest achievement post-Independence has been building on our foundations, to achieve an open society, an open economy and a multicultural secular democracy, home to all the great religions of the world. We feel proud of India’s history and her commitment to these core values and unity despite her many diversities”.

She added, “There have been great leaps made in the bio tech, solar power, green building areas as well as numerous and countless other field but whilst these figures are very encouraging, a lot still needs to be done. We aspire to an India where all women are treated with respect and are given the same opportunities as men; an India in which the weak and downtrodden are empowered, the disabled find support, and every individual is touched by the hand of progress and development, an India where every citizen can lead a life of dignity, self-respect, decency and hope”.

Wishing each other Happy Independence Day, familiar faces caught up with each other, and people new to Brisbane got an opportunity to exchange contact details. Delicious samosas with warm chai and soft sweet gulab jamuns were a perfect treat on this morning. 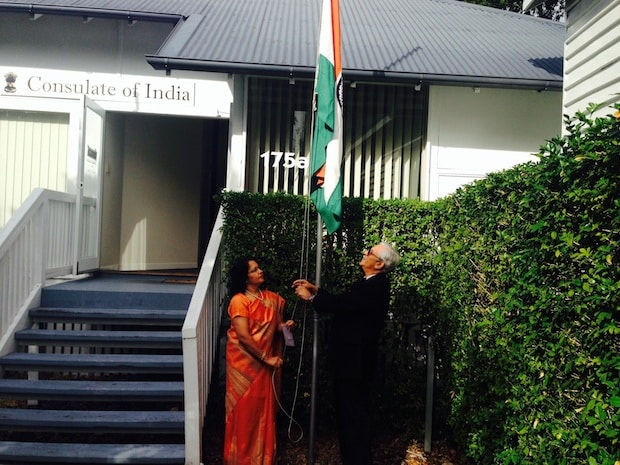 Adelaide has got to be different. Usually, the Indian Independence Day is celebrated on the weekend closest to August 15 unlike in eastern capital cities where it is observed on the actual day. In spite of having its own building, the Indian Australian Association of SA holds the event indoors at a bigger hired hall, as its own premises cannot hold the large number of attendees. As such there is no formal flag hoisting ceremony, perhaps due to the fact that there is no official representative like a Consul. But that does not take away the enthusiasm of the local Indian community in attending and presenting cultural programs from different regions. Local politicians too are enthusiastic in making their presence felt, considering the growing size of the community.

For the past several years the State Premier has made himself available to be the chief guest, as was the case this time around. Besides the Premier Jay Weatherill, Minister Susan Close, Federal MP Tony Zappia, all from the Labor side, were present. David Ridgway and Jing Lee both Liberal MLCs represented the Opposition.

The planned indoor flag raising ceremony was abandoned because of a mechanical fault and the event started with the national anthems of Australia and India.

Welcoming the guests, the Association’s President, Rakesh Mohindra, said India’s freedom did not come easily and it took considerable time and struggle, albeit peaceful. Celebrating the day was to recognise the sacrifice made by many thousands and a kind of paying tribute to those freedom fighters. With Indian professionals and skilled migrants now working world over, “there is no country where Indian presence is not felt,” he noted. After briefly pointing out many of the advancements India had made since Independence, he said there was every possibility a large contingent of Indian business people and tourists would come to Adelaide for the Cricket World Cup match India would play at the modernised Adelaide Oval next February. This could help to strengthen the ties between India and the state which has now an Indian population of 24,000.

Chief Guest Jay Weatherill revealed in his speech that he was leaving for Delhi the next morning for trade talks. Standing under an arc light with tiny beads of sweat shining on his forehead, he said “I am now being well prepared for Delhi’s 33 degree heat and humidity”. Acknowledging the contribution of the local Indian community to the State’s economy, he said, “I challenge you to make even greater contribution. I am visiting Delhi and Mumbai to explore specific trade opportunities for SA industries that will benefit both India and our state”.

With the speaking segment over, the cultural canvass of India was unfolded with dance items from various parts of the country: South Indian Bharatanatyam, Gujarat’s garba and Punjab’s bhangra. Of course there were the ubiquitous Bollywood numbers presented by young children aged four to seven, on freedom-themed songs like Sare jahaan se and I love my India, evergreen items for this occasion. The Keralites had the last word, with a ‘lungi’ dance of a different kind, playing the traditional Chandai, large drums hung from the shoulders. Talk about ending with a bang!

An ode to Raghu Dixit