Home Arts Beyond a billion ballots 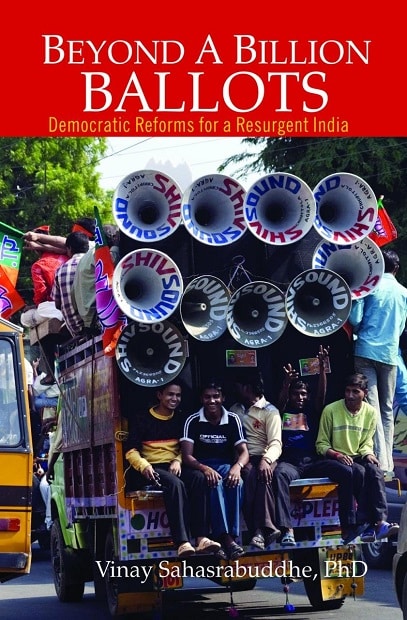 It is the world’s largest democracy but India’s political system suffers from serious flaws. This much is known to – and admitted by – almost all Indians.  In Beyond A Billion Ballots, what activist-researcher-freelance journalist Vinay Sahasrabuddhe does is to plunge into the depths of all that has gone wrong with Indian democracy, as only a scholar can. “Democracy in India is more impressive in form than substance.” Unlike most others, he comes up with possible solutions to stem the rot.

India, he says, can ill afford the growing scepticism about democracy. Widespread corruption, sycophancy, populism and money-and-muscle power are the major diseases. This is one reason why Indian democracy has failed to secure better governance.

“People no longer believe that politicians pursue politics for some great cause,” Sahasrabuddhe says. The moral authority of party leaderships has eroded. Of the 49 recognized parties, barring the BJP, CPI and CPI-M, almost all others are one leader-centric and/or family controlled. Dynastic rule is an accepted trend in several regional parties. And with party forums losing relevance, middle rung leaders have lost their importance. With television reaching almost every home, party leaders can communicate with voters directly without local organisers. Regional, caste and religious identity dominate the political scene.

Ideology has been pushed to the periphery; personal ambition is the sole motivating factor for most party workers in most parties. So singularly absent is ideology that any party could fit into the Congress-led UPA except the BJP and any party barring the Congress and Communists could join the BJP-led NDA. “The image of a politician has never been so bad in India.” The absence of genuine internal democracy in most parties has contributed to their decline.

Is there a way out? Sahasrabuddhe is a strong advocate of the Proportional Representation (PR) system, as opposed to the present First Past The Post electoral outcome. “PR is likely to help improve the quality of democratic governance… PR is more capable of challenging moneyed and patronage politics.” Sahasrabuddhe feels that PR could perhaps tackle the systemic solutions to India’s democratic deficit. “PR will provide greater political stability and more certainty (to) the schedule of elections.”

But political and democratic reforms are easier said than done. The book warns that Indians are hungry for a better quality of life and this unrest can be ignored only at our peril. Delays in fixing the system will add to social unrest. “Sooner than later, India needs to unlock its democracy – now chained to the archaic, outdated aspects of the system.”

The book – a scholarly study but repetitive in parts – moans that the Lokpal movement lost its way and failed to unveil a larger agenda for political and institutional reforms. This comment was made before the AAP’s amazing success in Delhi though the party did not take recourse to money and muscle power. The Delhi election – like polling in some states – also disproved the contention of diminishing popular participation in the democratic process. The book asks political parties to include voters at all levels of activities and deliberations “if they are to transform into vital institutions”. In some ways, this is what the AAP has done, causing widespread envy.

Finally, the book says that “today, parties are in newspapers, not in localities, they conduct public meetings, although they are otherwise absent in the mohalla“. Is this true for all Indian parties?

Keeping her goals in sight