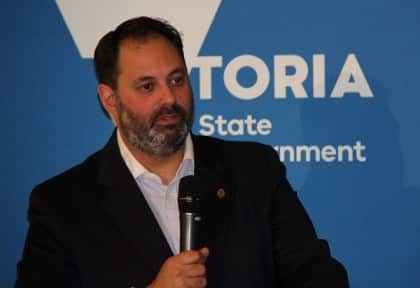 Reading Time: 3 minutesFirst-generation migrants setting up new ventures to get support, funds
Ahead of their proposed India strategy, the Victorian Government will appoint a business commissioner to India, according to Philip Dalidakis, minister for small business, innovation and trade.
The announcement was made at an ethnic media briefing recently at the Parliament of Victoria. Multicultural affairs minister Robin Scott joined Dalidakis to discuss initiatives on engaging with Asia.


Dalidakis said the business commissioner will be based in Bengaluru in Karnataka. “Further details will be disclosed soon,” he added.
The commissioner will have an important role to further trade relations between India and Australia. The services may also extend to Nepal, Bhutan and other South Asian countries.
Scott began the briefing with an introduction to Dalidakis and his portfolio of small business, innovation and trade. “Small business is one of the classic means of economical engagement for migrants,” said Scott.
“Migrants come to this country and through their talent, skills, enterprise and the desire to create value for themselves and the society they live in, they start a business,” he elaborated.
“Through their small business, they achieve and contribute to the economic fabric of Victoria and create a place for themselves and their families in the society,” the minister added.
He then went on to introduce Philip Dalidakis as a very ‘forward-looking minister.’ “He is someone who is very passionate about multiculturalism and his portfolio of responsibilities, which are integrally related to how our diverse society economically succeeds,” said Scott, before inviting his colleague to address the gathering.

Dalidakis said small business is something that he feels very strongly about in terms of support for the migrant communities.

“There is no better, no easier or no faster way for migrants to create their own wealth and economic progress than to be able to create their own small business,” said the minister.
He spoke at length about the proposed payroll tax changes that, he claimed, would help small business to create more value and be more profitable.
According to Dalidakis, the new generation, particularly the millennials, want to work for themselves and be their own boss.
“They may start as a small business but may eventually want to change the size and scale and not remain a small business anymore. A separate policy is required for start-ups and small business,” said the minister.
He also touched on topics like international education and student travel discounts, the China strategy announced by the premier this year, and the third round of $60 million Launch Vic grant funds for Victorian start-ups.


Launch Vic will invest between $50,000 and $500,000 per application to support organisations to deliver programmes that improve access and participation in the Victorian start-up ecosystem for first-generation migrants and refugees.
“It is important to provide opportunities to people to grow wherever they are in Victoria, whether it is in rural, regional or metropolitan areas,” said the minister, before wrapping up his formal address.
The floor was then opened for questions from media representatives from various ethnic communities. Questions on Victorian government’s engagement, mainly with India and China, were posed to the ministers.
Also under discussion was the imperative need for Victoria to establish and foster a sister state relationship with India, similar to China.
Minister Scott announced, earlier, that there would be many such media briefings, in the future, involving ministerial colleagues and others to discuss what the government is doing.
- Advertisement -
Share
WhatsApp
Facebook
Twitter
Linkedin
Previous articleSpiritual group exhibits at Parliament House in Melbourne
Next articleWho's got the look

Place your AUSvIND bets with Betfair