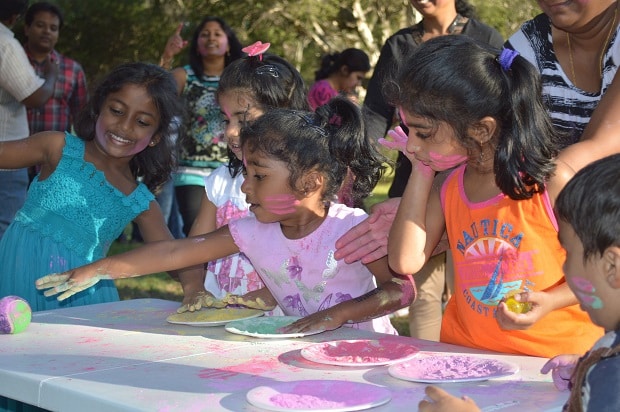 The declaration of Telangana as India’s 29th state was greeted with joy and celebration by members of the Australia Telangana Forum and their families recently.

Over 125 members gathered together in an informal get-together at Parramatta Park, joyously celebrating the announcement of the state and enjoying an impromptu afternoon tea with sweets and snacks, and by playing with holi colours.

To commence the celebrations, Mr Hem Chander lit a traditional lamp at the Telangana Thalli (Telangana mother) portrait and spoke about the Telangana movement during 1948 and 1969. Members paid tribute and saluted the 1200-plus martyrs who lost their lives in this movement.

The celebrations, albeit on a smaller scale, mirrored those in India as supporters of the separate statehood danced in joy and burst firecrackers while chanting ‘Jai Telangana’, across various parts of the region.

School students in the 80s or 90s were taught that India is divided into 26 states, and Uttarakhand and Jharkhand only came into existence in the 21st century. Current students will now learn that India has 29 states, the latest being Telangana.

Telangana is one of the three regions of Andhra Pradesh state, the other two regions being Coastal Andhra and Rayalaseema. Since the formation of Andhra Pradesh in 1956, the people of the Telangana region were dissatisfied over the way agreements and guarantees were implemented in relation to them. This led to protests by students under the leadership of a political party called the Telangana Praja Samithi led by M Chenna Reddy and Konda Lakshman Bapuji. About 300 people died in various incidents of police firing at the time, and subsequently until now, at least 1200 people have sacrificed their lives for this movement.

But their sacrifice was not in vain as the Telangana state came into existence on February 20, 2014 when the bill was passed by the Rajya Sabha. As per the bill, Hyderabad will be the joint capital of Andhra Pradesh and Telangana for the first ten years.

Telangana is a resource-rich region, but the merger with Andhra Pradesh and the states dominance over the use of resources meant a breach of several agreements relating to Telangana jobs, water and financial resources. The people of Telangana felt neglected and caused civil unrest in 1952, 1969 and more so in the last 14 years, by putting in a lot of pressure on both the ruling and opposition political parties to take a stand on a demerger from Andhra Pradesh to form the Telangana state. The result has been victory after a long fought battle.

“Now the people of Telangana can enjoy self-rule through a democratic process, and can use their resources to complete projects stalled since the past 60 years, for the betterment of the new state and its people”, says Prasad Ragipani, General Secretary of the ATF. “They can get local jobs that were lost during the merger, and will have access to their own water and financial resources”, he adds.

About 40 million people of this region breathed a sigh of relieved independence at the President of India’s approval to end 60 years of struggle.

The ATF strongly feels that this separation between geographies will allow the people of Telangana to make their own decisions, use their rich resources more sensibly and help people of the region progress and develop for their betterment. They also believe that this division is neither a victory nor a defeat between the people of both states. As a result of the separation, the rural areas of both regions will get incentives from the government of India towards building a better nation. In conclusion, Prasad presented the vote of thanks and the ATF welcomed the announcement of a separate Telangana state, congratulating the people of Telangana living across the globe.

A diplomat in the making