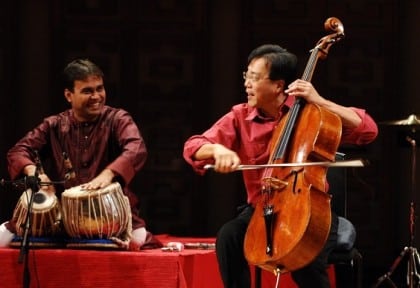 Sandeep Das, in collaboration with Yo-Yo Ma’s Silk Road Ensemble, wins 2017 Grammy Award for the Best World Music Album. But he is yet to be recognised in India, writes RADHIKA BHIRANI

He is experiencing “satisfying tiredness” after winning his first Grammy Award, but that hasn’t stopped India-born tabla virtuoso Sandeep Das, who has been playing in collaboration with an international ensemble of musicians for 18 years, from wondering why he was never considered worthy of an honour in his own country.
In a telephone conversation with IANS from Boston, Das lamented how India is “happily riding a slippery slope into a dark abyss” where art and culture is not given enough mileage.


“It’s a sad fact that when anybody (an Indian) gets a global prize… India wakes up then. It is also very unfortunate that the media is obsessed with cricket, Bollywood and models. Nothing is bad about it, but our obsession with very few things is definitely very sad. Where are the art and culture pages that we used to have in newspapers when I was growing up,” he asked.
“Any good newspaper from any cultured society in the world has space for art and culture… Not in India anymore. It’s a very slippery slope that we are very happily riding into a dark abyss… That needs to be stopped,” said Das, whose collaboration with Yo-Yo Ma’s Silk Road Ensemble Sing Me Home has just won the Grammy in the World Music Album category.
Das, who had received two nominations before he won the award, said: “Where is the Sangeet Natak Akademi Award or any award… I have never got any award in my country… And this was my third Grammy nomination.”
“It didn’t happen overnight… My work is recognised here (in the US) for what I have, rather than who I know, or whose son I am or whose lineage I have. Those attitudes have to change (in India),” added Das, who grew up in Patna and graduated in English Literature from the Banaras Hindu University.

Having first learned the nuances of tabla playing under Patna-based Pandit Shiv Kumar Singh and later being in the tutelage of Pandit Kishan Maharaj from Benares for 12 years, Das has had a professional career spanning 23 years. He has played with the likes of the late Pandit Ravi Shankar, and has been associated with legendary cellist Yo-Yo Ma and The Silk Road Ensemble since 2000.
Does he feel fusion is the best way to promote classical music in present times?
“I don’t like the term fusion, which is popular in India… Fusion is more confusion, I feel. What I do is collaboration. Where we go wrong is when we don’t learn one thing enough. I have 12 years of solid training from my guru Pandit Kishan Maharaj ji. I am a strong, deep-rooted classical musician, and with that, when you go out and shake hands with someone from another country and collaborate… It’s at a different level and quality,” he said.
“Today, the younger generation should look at learning something well. Indian classical music always stands out… In cricket, we lose matches, but I say it jubilantly that with any good classical musician from the world, we have never lost a game,” the Grammy winner said.
In tune with his sentiments, Das wears his Indianness on his sleeve — literally. He wore a kurta-pyjama for the Grammy Awards ceremony in Los Angeles, and said he courted compliments galore.
Also a cultural and educational entrepreneur, Das says he has a concert lined up in India in January 2018 as part of HUM (Harmony and Universality through Music) — which he founded in 2009. In the US, he is teaching students who come to his home to learn tabla.

“I have a student from China, US, an African-American… I have taught tabla to Korean, Japanese, Indian and kids from other nationalities too, apart from teaching at various universities,” he said.
He feels exposing children to classical Indian music in schools can go a long way in sustaining their interest in what’s their own.
“People will say classical music is very boring. But how will a child know a biryani unless he has tasted biryani? Putting it as part of school curriculum will give kids an exposure to what our music or tradition is.
“If we grow a society, where the majority of people are culturally rich, wouldn’t we be a better country?” he asked rhetorically and then answered: “We would be a cleaner, safer and more civilised country.”
–With IANS
- Advertisement -
Share
WhatsApp
Facebook
Twitter
Linkedin
Previous articleJhumpa Lahiri's reflections on book covers leave many questions unanswered
Next articleISRO makes history