The portrait of life 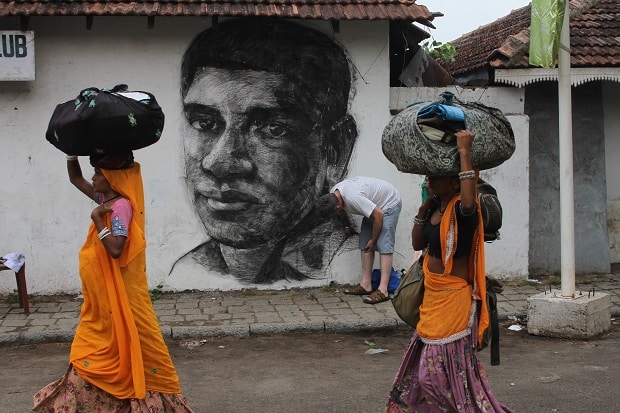 Reading Time: 5 minutesAn Australian artist in Kochi captures the essence of living through a medley of human subjects

On my recent visit to Kochi, Kerala, I was pleasantly surprised to see an Australian in the newspapers and in what is a rarity with most news these days, it was heart-warmingly good news. ‘Daniel revisits Biennale to give a soothing touch’ said the Deccan Chronicle. ‘Artist wields the brush for a cause’ said The Hindu. They were speaking about Daniel Connell, an Australian artist based in Adelaide who was in Kerala as part of the Kochi Biennale Foundation’s Arts and Medicine project.

Amidst the ever-noisy din of Kochi, heading to a quiet spot in a coffee shop, Daniel spoke to Indian Link in a phone interview. This was his fourth visit to the city. Wall portraits from his work at India’s first Biennale in December 2012 are still visible in the city. Daniel was in the news for the wrong reasons that year when his portrait of tea seller Achhu was vandalised. “One year on however, the drawing is still visible and I was warmly received back by the people of the area”, states Daniel. “It turned out that the event was a turning point for the Biennale. Initially people felt that holding such an art event was a waste of public money but public opinion changed after the attack. There was an overwhelming support of my work, generating sympathetic publicity for the Biennale. This incident only proved what I always suspected – that art cements the ties between human beings and that is its ultimate objective”, he adds with emphasis.

Since 1500, the port city of Kochi (formerly Cochin) was ruled by the Portuguese, Dutch and the British. Daniel found the area of Fort Kochi in particular, a melting pot of cultures and densely populated with different communities such as Indians of various religious backgrounds and cultures. There are Hindus, Muslims and Christians of various denominations, Jews, as well as Africans and Europeans – a perfect place to provide him with a lot of inspiration. “Here I am outside of my comfort zone, looking at different people in a different world”, says Daniel. “I am interested in the act of making portraits and how making portraits creates a sense of dignity and sacredness around the subjects. It does not matter that I am not Indian. The act of giving someone attention for an hour or so has the effect of breaking barriers and cultural differences”.

Daniel likes the fact that with portraiture, the subject shares an equal space with the artist. He experiments with drawing portraits in a variety of situations. “When I drew portraits of cancer patients, it did not matter that I was Indian or not. The ritual of drawing and paying full attention to the person gives people an opportunity for reflection that goes beyond cultural differences”, observes Daniel. The Arts and Medicine project is about offering people opportunities for reflection. In a medical situation, where the physical body is being treated, normally there are no frameworks or structures to give people the chance to attend to the spiritual or emotional issues that arise. Daniel found that the act of drawing a portrait offers patients and their families, opportunities for a wider discussion to emerge, other than pain and pain management which happens to be the prominent subject in a hospital situation.

Language has not been a barrier to Daniel’s work. There has been an overwhelming demand for his art. He drew twenty portraits in the first two days at the Ernakulam General Hospital, later averaging about ten a day. His subjects have been fishermen, bus-drivers, tea sellers, rickshaw drivers and people from many other occupations. He patiently draws them all and was amused when the person he drew the previous day earnestly described himself as a coolie. “It is such a colonial term”, laughs Daniel. Whatever their occupations, he feels that at the hospital, they all are centrestage. They are the ones being cared for. Daniel is at home with all these people in spite of not being able to speak their language.

He has, at times, questioned the value of his work but the palliative care doctors have given him overwhelming positive feedback. Art gives the patients something different compared to solace offered by religion or formal counselling, they felt. Daniel sadly adds, “Dying is terrifying and though I don’t focus on it or discuss this aspect with the subjects or their families, it is the elephant in the room. This is acknowledged without words”. The portraits are now displayed in an exhibition at the hospital and have been a huge success.

Working on this project has given Daniel an idea about doing a similar project in Australia when he returns to continue research for his PHD thesis on ‘Portraiture and Social Responsibility’. He says that it will be interesting to portray and contrast how people respond to portraiture in India and Australia. He is also interested in the Indian diaspora in Australia straddling two cultures, and is working with the Sikh and Malayali communities. The tenets of Sikhism particularly attract Daniel. Referring to Guru Tegh Bahadur, he says, “The ninth guru sacrificed his life for the Hindu community. In the process of fighting for our own identities in today’s world, this aspect of fighting for other communities is now lost. I want to keep that candle burning through my art”. He is against overrating art for art’s sake. “The connection between people is more important and this leads to more resilient and stronger societies. Ultimately this is what I am trying to achieve”, says Daniel. “Art is a tap on the shoulder asking us to remember our relationships and the importance of connections”, he adds philosophically.

However, art is not what Daniel always did. He was part of a venture for homeless people for 18 years, and involved with advocacy for human rights. Feeling drained, jaded and cynical, Daniel says that India provided the change he needed. Why India? “May be a past life experience”, he jokes. He finds India “very anarchic and compelling” and life is never ordered or controlled as in Australia. His experiences have varied from “infuriating and exhausting” to “disarming and joyful”. “On the whole, irresistible and very intoxicating”, he laughs! Daniel is grateful for the opportunity India has given him to reinvent himself as an artist and mellow down. He feels he can now use art in his activism in a more gentle way, in bringing about change.