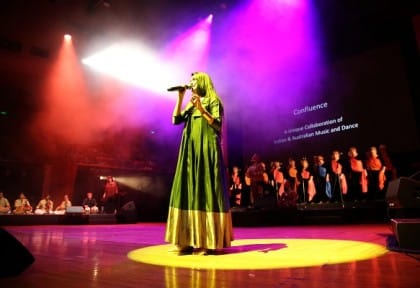 From the gentle sounds of temple bells at the very outset, one instinctively knew this was going to be a special concert.
The Sikh prayer Ek omkar satnam (One with everything) resonated in the Playhouse Theatre at the Sydney Opera House to begin the performance of the Sufi Gospel Project, part of the Confluence Festival of India in Oz.
Soon the words had seamlessly moved to Kabir’s Moko kahan doodhe re bande, main to tere paas hoon (O humble seeker, where do you look for me, I am always with you).
More beautifully blended sounds were to come: Amir Khusro’s Man kunto maula (Whoever accepts me as the master) to Persian poet Hazrat Shah Niyaz’s Man manam naman manam (I am not, yet I am) and Leonard Cohen’s Hallelujah.

After a resounding performance at the Sydney Opera House, Sonam Kalra and her band of musicians of the Sufi Gospel project gave another private performance at the Vedanta Centre in Sydney to a packed audience of devotees.
Sonam said that the Vedanta philosophy of Yato mat tato path (As many faiths, so many paths) resonated closely with the message that she was trying to convey through the Sufi Gospel Project to audiences the world over – the message of oneness of humanity, love and the universal truth.
It was a performance that defies being pigeonholed, a fusion of sounds and words from different religions and eras.
Speaking to Indian Link, Sonam says that she dislikes being labelled as a musician of any particular genre just as much as the term ‘fusion music’.
“We like to label people and categorise them into neat little boxes. Such generalisations and categorisations create differences. The aim of the Sufi Gospel Project is to create a space where such differences are blurred and labels are removed.” Their aim is to exemplify the truth that religion isn’t God and God has no religion.


“I don’t logically understand hatred and wars on religion,” Sonam says with a sincere passion that is hard to ignore. “As an artist it is my responsibility to convey the message in the way I know best, and even if one person leaves the room having heard this message, it is enough for me.”
Listeners feel an instant connection with her. They hugged her as they left the Vedanta Centre, feeling blessed to have heard such uplifting music. At the Opera House, she and her musicians received a standing ovation.
The Sufi Gospel Project has performed in many countries all over the world, but she says that the performance at the iconic Sydney Opera House was most special. Listeners at Vedanta Centre had an extra Sonam treat, denied as an encore at the Opera House due to time constraints. They swayed and clapped in merry abandonment to Dama dum mast kalandar, a song in praise of the Hindu mystic Jhulelal.

For Sonam, Baba Bullehshah’s early 18th century Sufi poetry Chal othey chalye jithey sarey anney (Let’s go the place where everyone is blind – to caste and creed) is as much an inspiration as the contemporary music of Ray Charles or Leonard Cohen. She successfully merges Gospel tunes with Hindu hymns and Kabir’s dohas (verses), and strings them all together with great music, including Irish tunes and the primordial sounds of Australia’s didgeridoo, a special addition to Sydney and Canberra performances by Si Mullumby. With just a few hours to practice on the day, Sonam says it felt as though Si was always a part of their troupe.
Describing her musical accompanists as “partners in crime, time and rhyme”, Sonam points out that the fact they belonged to different religions wasn’t something done intentionally, but something ordained by fate as the group came together. Amaan Ali Khan on the tabla, Ahsan Ali on the sarangi, Rajesh Prasanna on the flute, Anand Chawla on the keyboard and Tarit Pal on a variety of percussion instruments, add an extra dimension to the timber of Sonam’s rich voice. Sonam says she feels blessed and fortunate to work with these talented people who share her vision.

The organic, collective improvisations of their music, stemming from their deep faiths, results in the creation of divine music that people from all faiths can identify with. I heard an audience member comment about being amazed by the lack of any sheet music.
Formally trained in Indian classical music under Shubha Mudgal and Pandit Sarathi Chatterji, Sonam has also studied gospel music, jazz, and classical opera. But her path to music wasn’t straight forward. Though she started learning music at a young age, Sonam says she had to stop due to study pressures in Year 10. She went to arts school and graduated in graphic design. She worked in advertising as an art director but when she found that this meant she couldn’t be at the beginning of the ideation process, she took to writing ads instead, which suited her creative instincts.
Though crazy work hours in the advertising industry meant no time for music, Sonam confesses she enjoyed her time in advertising for four to five years. Around the same time, she started learning music again. At the turn of the millennium, she decided to take a 3-month break from work and concentrate on music. “After that time, I didn’t want to go back,” Sonam laughs.
Looking back on her journey, Sonam now realises the truth of the words of one of her teachers, “For your sound to be true, you have to have lived.” She says that the message of acceptance, tolerance and oneness in her music stems from her life experiences.

“I have lived through the 1984 riots against Sikhs, lived through the tsunami in Sri Lanka where I was with my husband, lived through the illness and deaths of my parents. I have lived through my questioning God, my beliefs and religion, as I wondered how it could unite and yet divide people. Through this learning, accepting and understanding, I found faith and now I do have something to say and I say it through the Sufi Gospel Project!”
Speaking about the origins of the project, Sonam says she was invited to sing Gospel music at the Urs (death anniversary) of Sufi Hazrat Inayat Khan at his dargah in Delhi. The irony and the beauty of the idea hit Sonam – a Sikh person singing gospel music at a Muslim dargah. She felt it was her responsibility to create something befitting the space and thus began the Sufi Gospel Project.

Tearing up while speaking about her late parents’ influence on her music and life, Sonam acknowledges her deep thankfulness to their liberal family upbringing where she and her two sisters were taught that they were equal if not superior to men.
“My mother is my soul. She is the reason I sing. My earliest memory is that of sitting on her lap and listening to Begum Akhtar at the age of three or four,” says Sonam. “When I got married and moved to my husband’s house, I asked for the chair on which my mother would sit. To this day, this is the chair on which I sit and create my music. I feel like I am in her lap.”
When asked about her future plans, Sonam says, “I don’t plan. No matter how much I plan, He has a plan. I do listen a lot to my inner voice though.”
Her next venture, called the Partition Project, is based on the stories of the partition of India and Pakistan. “I feel I have to do what feels true – I feel no reason to play it safe,” says Sonam, having spent a lot of time in search of perfection before realising she was looking for the wrong thing. Now she says she just follows her heart trying to find her own truth. “I don’t want to conform. Let people keep wondering. I may have a rock song in my next concert!”
- Advertisement -
Share
WhatsApp
Facebook
Twitter
Linkedin
Previous articleLittle kids, big impact!
Next articleShakespeare in Hindi!