For mum plus more

In what turned out to be a very enjoyable evening, the young Sanidya Kumar danced with enthusiasm and confidence. 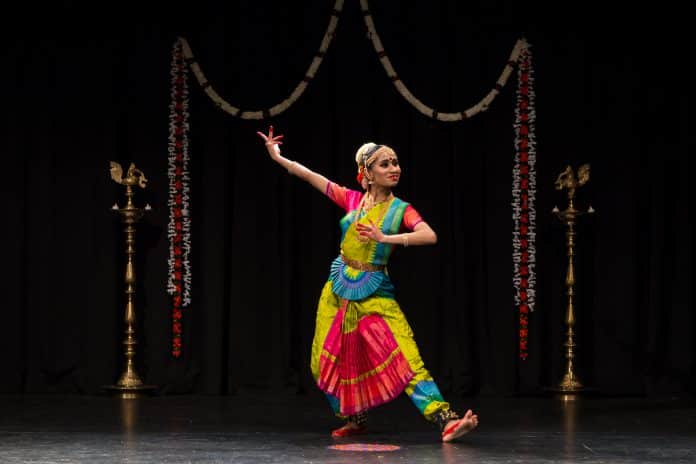 Reading Time: 3 minutesMother means a million to us. She gave us life, nurtured us through our vulnerable years,
and was our source of solace ever beyond. On a larger scale she is the Matha (or
Mathe) that protects the universe; at the same time though, she can be the very
destroyer – Kali, Durga or Chamundeswari. She is multifarious and is an all pervading
force. The composer Muthiah Bhagavathar brings this out famously in his ‘Mathe  Malayadhvaja Pandya Sanjathe’ (raga Kamas). To present this within the nuances of Bharatanatyam though, would be quite a challenge, given it is packed with expressive words, jathi swaras, kalpana swaras and associated word phrases.

And yet you did well, Sanidya, as you presented this item recently. The nritya you provided for lines such as ‘Shakodari, shankari, chamundeswari, chandrakaladhari, thaye, Gowri’ was a pleasure to watch. (Coming so close to Mother’s Day, this complex yet beautiful number performed with much precision, must have filled your own mum’s heart with pride.) The music for this item was extraordinary in that it swayed into different moods and shades and induced a variety of feelings. The abhinaya provided by the dancer was quite extended from being a calm and peaceful mother to the very destroyer, Chamundeswari. The performance oozed Roudra rasa (the emotion of anger). And yet fittingly, it all
concluded with a peaceful shloka.
This was the Varnam, the central piece and the acid test of the dancer, in the Bharatanatya arangetram of Sanidya Kumar, daughter of Vijayalaxmi and Krishna Rao Kumar of Sydney. She is a disciple of Nikhila Kiran, the illustrious dance guru who runs the Natyanivedan
School. The institute trains nearly 120 students of which four have already made their debuts. The event was held in the Lighthouse Auditorium of the Anglican College in Orchard Hills (Sydney) in mid-May.
In what turned out to be a very enjoyable evening, the young Sanidya danced with enthusiasm and confidence. After the invocation to Lord Ganesha and the Alaripu, came the Jathiswaram in raga Chakravaka. This was a purely abstract dance. Rich swaras – sa sa ni dha pa ma ga ri sa ga ri sa from the vocalist Prema and her accompanists filled the
auditorium. It was left for Sanidya to supply the visual elements in the form of dance. She did so brilliantly, taking her demonstrated skill – and her composure – through to the other evocative pieces.

Tasked with showcasing her skill in front of a discerning audience, Sanidya passed with flying colours. She brought out the moods in some of Carnatic music’s finest pieces, her stylised movements all made to perfect measure. Through it all, her belief in herself through this major solo recital, shone through radiantly. The number ‘Bho Shambo’ was a
dancer’s delight and concluded with pirouettes.
‘Keerthane Shrunga Puradheeswari’ had many expressive poses with imaginative insertions. ‘Vishama Kara Kannan’ was folkish in nature and brought out the
various facets of Lord Krishna – mainly his propensity for mischief, and the agitation of his girlfriends, the Gopis. The performance concluded with the well-known Dhanasri Thillana followed by a rare and unique Mangalam.
The music provided was totally indigenous. Prema Anadakrishnanan’s vocal mastery was abundantly apparent; her music reverberated in the auditorium. Nikhila Kiran gave the natuvanga, while Janakan Raj presented versatile mridangam support. He has proved to be
a master of the craft. Venkatesh Sritharan (flute) and Soumya Sritharan (veena) added to the richness of our experience. Some of their musical interludes were wonderfully appealing.

When she is not dancing, Sanidya works in HR with Enrich Consulting Services in Sydney, having recently obtained her Bachelor’s degree in Business and Commerce. It is heartening to see her join the accomplished bunch of youngsters in our community who are ensuring that our centuries’ old traditions in the classical arts live on in this era.