Preaching to the audience 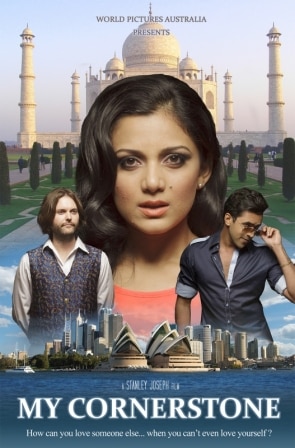 Reading Time: 3 minutesMy Cornerstone is an Indian Oz film that looks at racism within the community, kidnapping in India and the church, with a few chuckles along the way, writes MELISSA TWIST

My Cornerstone is a film that describes itself as a tale concerned with a young Indian nurse who travels to Sydney to look after the unwell grandmother of the Pintos, a wealthy Indian-Australian family. Naturally, there’s a love story between the nurse and the son of the family, some cracks between the husband and wife’s relationship and a mysterious character called Chris.
The World Pictures Australia film is directed by Stanley Joseph (also screenplay writer), and stars James Morcan (also the writer of the story), Zenia Starr, Gil Ben-Moshe, Oren Ben-Moshe and Romin Khan. It’s a drama meets romantic comedy meets religious flick (if you can get your head around that), which premiered in Sydney this month.
Although it’s fantastic to see another addition to the Australian film scene, especially an Indian Australian one, it doesn’t quite hit the mark.
Shot between November last year and March this year at various locations in Mumbai AND Sydney, this film isn’t quite sure what it wants to be. The big secret about who the character Chris is, is worked out by the audience early into the piece. This renders the shots of him on Sydney’s Eastern suburbs coastline with wind through his hair as quite comical, especially with the choice of music. The film might have been best left as a comedy, rather than trying to introduce elements of drama and religion into it, which leave the audience feeling confused. For the non-religious audience members, you might end up feeling preached to by the end of the film, leaving a bad taste in your mouth. It might have been a good idea to have transformed Chris into Cupid instead.
Crowned Miss India Australia 2013, Zenia Starr is Adina David, a nurse who secures a job in Australia through an employment agent in Bangalore. There are constant flashbacks to Adina’s previous attempt to get placed in a job in Australia, which ended in her being kidnapped. This is played up as her past, which haunts her. There’s a love story, a wedding and characters who evolve along the way.
“She was somebody I felt growingly attached to as I read through the script,” Zenia Starr told Indian Link. “Her desire to stay attached to her faith and cultural roots despite the pressures of popular society is something I respect. I was also intrigued by the fact it sought to marry Indian and Australian cultures, promoting the best of both and this is something my identity is tied up in so I thought it would be fun to be a part of. Overall, it has a great message for people of all faiths, cultures and generations!”
My Cornerstone was made over the space of 36 days (along with another feature length film), and the “the cast and crew pulled some pretty long hours at times, sometimes working at 20 hours at a stretch,” says Zenia.
The grandmother Lydia shines in her role, however, some of the other actors don’t seem as comfortable in their roles, like the vain mother Miriam, who is quite stilted in a few scenes. Miriam plays the mother who wants the best for her son (in terms of a marriage match)and acts as a voice of racism against Indians, despite the fact that she is Indian Australian herself. “I think most Indian migrants take pride in their roots, however I would agree there is a minority who have superficially ‘over-assimilated’ in order to fit in,” Zenia says of Miriam and her attitudes. “The intention is probably simply to feel more accepted in a foreign land, but it is unfortunate that it can drive people to be heirarchical amongst their own community. I hope this film reveals how unattractive that attitude is”.
Zenia hopes that audiences walk away from My Cornerstone feeling ” the sweetness of life is in the relationships we build and nurture, rather than the possessions we have or the status we hold”. However, it’s easy to be distracted from this message by the unfinished looking film, which could have done with a tighter edit. The version that we saw however, was a slightly different version to the one that other audiences will be treated to, so here’s to hoping that these flaws are removed, along with the drawn out shots of Chris meditating, with the same music track played again and again.