Like water on hot concrete: The artist in diaspora 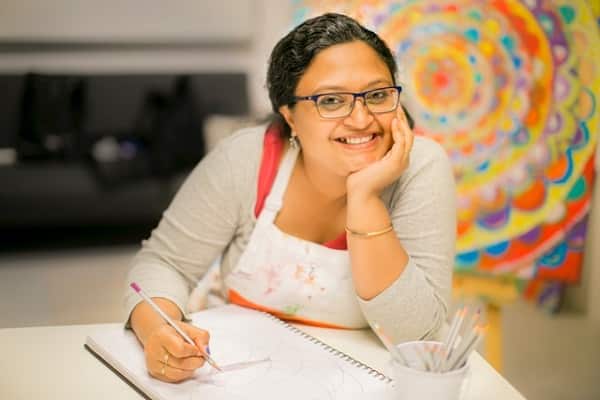 Anindita Banerjee wins the Wyndham Art Prize for her video FADE, based on a vanishing alpona

“I’ve never been a nine-to-five kind of person,” says interdisciplinary artist Anindita Banerjee. Having been creative all her life, she eventually found that her (successful) career in IT just wasn’t satisfying enough. Since beginning her career as a full-time artist in 2012, she has started her own studio, exhibited her work extensively, and, most recently, won the prestigious People’s Choice Award for the Wyndham Art Prize, for her video work, FADE. “I realised that all the thoughts in my head, I was able to express through art,” she says.

Anindita’s work, on the surface, has clear connections to the cultural rituals of her native Calcutta and could therefore seem like the kind of reaching out to roots that is routinely applauded and banalised by ‘diversity’ mascots. However, as she describes it to me, a much more nuanced, conceptual vision emerges. “I try and recreate what is a very personal experience – it might be ritualistic or not – in such a way that it is quite open. I get others to participate, but I don’t force it.”
Most importantly, she does not reconstruct a ritual in its original form, and certainly not in its original place – instead she deliberately creates a version that is modern, close to her own contemporary life, and then actually uses it to interrupt other spaces – such as when she recreated a wedding ceremony in a gallery. “I recreate it in a place it does not belong, with people who have no idea.”
The idea is not to ‘educate’ people about Indian culture, but to open up a dialogue – for people to respond personally to her own personal enactment of an experience. “I’m not saying I have authority, that this is what you should look at as Indian culture… this is the way I do it.” She sees the thoughts behind cultural rituals as “pretty general and universal. The uniqueness lies in the way we express it. Everyone brings a uniqueness, and [I am] happy to share that, but only if you’re wanting to share it.”
For FADE, Anindita filmed herself recreating traditional Bengali floor art, alpona, but instead of using rice flour and water as is customary, she used only water on concrete outside on a hot day to create the designs, which emphasised the ephemeral nature of such art.
“It was vanishing as I was doing it, which made very difficult to film!” By focusing on alpona’s evanescence, she wanted to explore the cultural other’s voice, which raises itself towards acceptance, but has to be in constant dialogue if it’s to have any lasting impact. “If we just raise our voice once, it will fade completely.”

On her website Anindita also describes her work, as ‘aim[ing] to test the existence of the cultural otherness’; when I ask her to explain she thanks me for asking it, warning me that it’s a subject “she could speak about forever.” But in a nutshell, her exploration of cultural otherness is one of how it is easy to “overlook that in any situation, there are loads of people who belong to a different culture. And that it is okay to be different – because it is special and it is something that is valued.” That’s what she wants people to understand – that she is a unique individual.
She is looking at the same idea in her research for her PhD in Creative Arts at Deakin, which examines the experience of living in a diaspora, where those who do so have “to reconfigure social identity in response to conditions imposed by others.” One basic example: “You walk into a boardroom…and everybody is wearing a black suit.” Including those who, in their country of origin, “would possibly not wear a black suit on Wednesday morning.”
Anindita’s advice for aspiring diasporic Indian artists is to be on constant alert for opportunities and to stay true to themselves. She also cautions them not to limit the exhibition of their work to the Indian community, but instead reach out to their wider communities: “There are people out there who are wanting and waiting to experience something different.”