Krishna in Erskineville – but does he belong there? 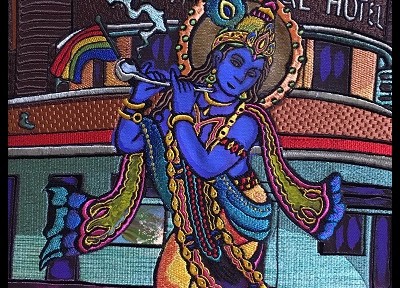 A controversial new artwork has some Hindus incensed, but the piece by Indian-Australian artist Leon Fernandes is a great talking point

Hindus worldwide have expressed their concern over a recent art exhibition by Sydney artist Leon Fernandes who has depicted Hindu Gods and Goddesses in modernised contexts. Urging for the immediate withdrawal of the controversial piece, ‘Krishna in Erskineville’, some commentators from the community have felt that the artworks “trivialise” highly revered deities such as Lord Krishna, Lord Ganesha and Goddess Durga.
A gay Indian-Australian artist, Leon Fernandes has a unique creative mind and a radical sense of humour, which he incorporates into his mixed media pieces, made up of embroidery, paints, canvas and even parts of his own father’s Indian fabrics. Although, not everyone sees the “cheeky” side to his work, he is proud of it.

“This series has been a labour of love for me,” says Fernandes. “Hindu gods have the same feelings that we all have – love, lust, rage, despair, pain, joy – but they often take them to the extreme. These images are a way of exploring that whole spectrum for me. They have become a vital part of my emotional landscape.”
‘Krishna in Erskineville’ is the third incarnation of a series of Hindu gods in Sydney. In ‘Durga’, the powerful creation goddess sits astride a tiger, incandescent with rage against the iconic suburbia of Howard Arkley. ‘Ganesh’, the merciful survivor, stands in the Australian bush with a banksia, offering a gift of sweet bees in place of the traditional laddoo. ‘Krishna in Erskineville’, the culmination of this sacred and sacrilegious trilogy, stands flirtatiously brandishing his pipe, his body adorned with peacock colours echoed in the pride flag flying from the iconic Erskineville pub.
Fernandes defends his controversial choice to depict Krishna smoking ice.
“Drug consumption has a ritual significance in many world religions and communities,” he says. “It can be harmful, but it’s also part of who we are.”
Modern Hinduism often finds itself in a struggle reconciling the old with the new as traditional conservatism often finds itself at odds with ancient Hindu traditions, which are indeed rife with mind-altering substances, as well as gender and sexual fluidity. Just this week, Hindus worldwide celebrated Holi, a festival which has historically associated with use of bhang, a natural intoxicant made from marijuana leaves and flowers.


Nevertheless, it is easy to understand and respect the scepticism, and outright opposition to, such risqué works. Despite the colourful history evident in Hindu texts, the deep influences of conservative Judeo-Christian notions leftover from colonialism reverberate deep within modern Hinduism. As a result, such works are bound to bring to the surface uncomfortable conversations about fiercely empowered, weapon-wielding Goddesses or Gods who routinely practice gender fluidity and, of course, the role of drugs and other mind-altering substances in Hindu lore.
For local Hindu communities grappling with how to better engage diasporic, millennial youth, struggling to reinvigorate the sense of childhood excitement from tales of heroes and villains, gods and monsters long since outgrown, Fernandes’ artwork ought to be a great talking point. Growing up in the information age, above all, our young people want a better understanding of what it is they’re participating in, why and how it relates to their experience not only as Indians or Hindus but also as Australians participating in a Western society. Shifting ancient Hindu concepts into a 2017 Australian context provides a fantastic platform for the community to have discussions about those otherwise uncomfortable grey areas of Hinduism which are avoided in favour of traditional ritual-based practice. Even if Fernandes’ artwork is a platform where the community is bound to disagree, it is inarguably engaging.
- Advertisement -
Share
WhatsApp
Facebook
Twitter
Linkedin
Previous articleRemarkable kathak: Nirupama and Rajendra
Next articleBura na Mano, Holi hai!