India through my eyes 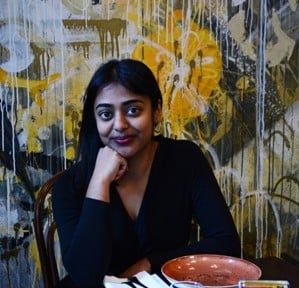 A digital exhibition at Melbourne’s CBD has been celebrating modern Australian-Asian street art and photography for the past few weeks. The exhibition, entitled ‘Seasons of Gold’ is staged at Burma Lane restaurant, which itself boasts contemporary Australian cuisine with a distinct Asian flair.
Set against a breathtaking Mike Eleven mural, the exhibition champions the work of four up and coming photographers Jaz Blom, Anu Kumar, Thomas Lim and Bryan Tang.

Anu Kumar’s photo series offers us a glimpse into Ram Leela, the traditional dramatic re-enactment of the Hindu epic Ramayana.  But in Anu’s version it is not the vibrant, colourful and fun filled fair as we know it. Instead, she captures the everyday moments of the people who work behind the scenes, the mundane before the frenzy of the fair sets in.
Anu is captivated by the beauty of everyday life, exploring the stories of the ordinary which in turn help her to delve deeper into her own Indian heritage and culture.
Originally a native of Delhi, Anu Kumar moved with her family to Melbourne when she was eight months old. Her parents were professionally employed, modern and progressive, who also tried to inculcate the rich Indian values and beliefs in their children. But Anu grew up with a slightly confused sense of identity, as most first generation migrant children. The need to fit in with her friends and peers far outweighed the necessity to understand more about her Indian roots.

Even though creatively inclined, Anu chose a career in science but a few months into the course, realised that this was not what she wanted to do with the rest of her life. Armed with the new camera that her parents had gifted her, she decided to travel across Nepal and India, visiting her extended family in Kavi Nagar, Ghaziabad. And it was during these travels that she discovered her love for photography and her love for India.
Returning to Melbourne, she got into RMIT for a degree in photography. By the end of it, she was working with The Age as a photojournalist.

Speaking to Indian Link, Anu says, “I loved my work with The Age, but there was something restless within me as I could not completely pursue my style of photography. So I decided to quit so that I had the time and freedom to capture more photo stories, the way I wanted to.”
One of the biggest projects Anu has undertaken so far has been ‘Kavi Nagar.’
“I decided to ditch the DSLR and instead opted for a medium format camera to capture my childhood home with a fresh perspective. What looked boring and unremarkable to me during my growing up years, suddenly became interesting when I looked through my lens. I have played around a lot with colour in this photo series, because I feel it adds drama to that sense of randomness.”

This photo series is a work in progress and Anu soon hopes to convert it into a photo book, which she feels will offer a more tangible sense to her work.
A restless creative soul, Anu is now the proud owner of a pyjama label, ANUK. Now what’s a photographer doing with pyjamas?

“My frequent travels to India exposed me to the country’s rich, artisanal heritage. And being a pyjama lover, I thought why not combine the two. So the Anuk pyjama line is fun, vibrant, comfortable, made ethically from eco-friendly garments using artisanal techniques like hand weaving and Rajasthani block printing”.
The only advice she has to give anyone who wants to try their hand at something new, is not to let fear get in the way. “Don’t be afraid to try out something new just because you have spent a long time acquiring a certain skill or degree. The question to your inner self should always be, ‘Is this what I want to do for the rest of my life?’”
Learn more about Anu’s work at anukumarphotography.com and anukpajama.com