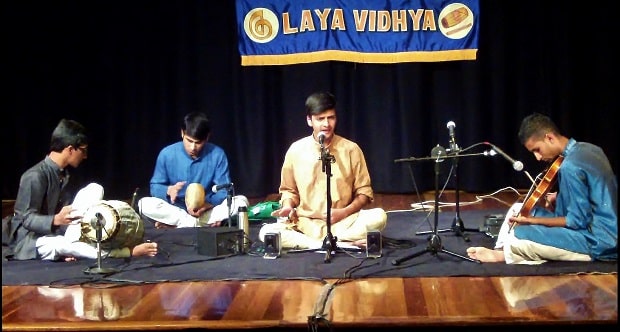 The highlight of the classical scene in October was watching two extraordinarily talented Melbourne-grown teenagers perform.  It is hard enough for children to get their heads around Indian classical music in an alien environment; most children (mine included) go through the motion of attending music lessons to please their parents, perform in a few school concerts, and if talented, do them well.  But by the time they are in universities or at work, Indian classical music is but a distant memory.   There are a few – a handful – of very gifted young musicians who have not only done their parents and teachers proud, but truly carved a niche for themselves in Carnatic music.  One of them is Keshav Ramachandran, who played the violin in the ‘young artiste’ segment of a concert organised by InConcert Music on November 16.  Those of us who have watched Keshav’s rise and rise, of course, are not surprised. Readers may remember that not all that long ago, when Keshav was barely 10, this reviewer reported on a full-length vocal concert that he performed with his sister. At the concert on November 16, this extraordinarily gifted youngster gave an hour long mandolin concert at the Wellington Secondary College, leaving everyone spellbound. From the Kamboji varnam to the Devarnama in darbari kanada, he performed with consummate ease, teasing melodious ragas from his mandolin.  The alapana in raga Kalyani, and the Tyagaraja kriti that followed it were flawlessly rendered. The Brindavani Saranga and shanmukhapriya too, kept the audience entertained.
Ramakrishna Nagasundaram on the mrudangam gave excellent support, effortlessly keeping rhythm and complementing the mandolin music with the right pace.
The senior musician who performed that evening was Shobha Shekhar, well known to Melbourne classical music cognoscenti.  She thrilled audiences with a glittering navaraga varnam, then treating them to melodious kritis in Ataana and Bilahari.  Shakti Ravitharan, a senior disciple, provided vocal support.
The other extraordinary talent was Narayanan Rangan, who performed a vocal concert on October 19 at the same venue under the same banner, that of InConcert Music.  Narayanan, still in high school, regaled the audience with some scintillating music.  He has been performing with his equally talented brother Raghuveer Rangan, but this was perhaps his debut solo concert.  Narayanan sang with confidence and feeling, suffusing his music with ‘bhava’, so pivotal in rendering Carnatic compositions.  The Vasantha varnam he began with, set the pace and the mood for the rest of the concert, and he didn’t put a foot wrong.  The difficult Dikshitar kriti Vallabha Nayaka was well delivered, and Narayanan prefaced it with a competent alapana.  This was followed by a Tyagaraja kriti ‘Teliyaledu Rama’, and both this and the popular composition ‘Pirava varam’ were sung with feeling, and he truly brought out the emotion – the bhakti – so central to the lyrics.
Narayanan Ramakrishnan on the violin gave able support; Pawan Gopinath on the mrudangam and Surya on the kanjira completed the music with excellent percussion support.
The senior artiste to perform that evening was Sundari Saripalle, who is one of the most respected vocalists in Melbourne.  She has a voice that is so crystal clear and sharp that her delivery is all the more powerful and effective when she sings the same raga or kriti as anyone else.  We were told that she hails from Vishakapatnam, and belongs to the Vijayanagar school.  Sundari Saripalle’s Ranjani varnam, and the kritis in Gowlai, hamsavinodini, kedara gowla, were a treat for the ears; her shanmukhapriya was a masterly rendition, and she outdid herself in the mohanam alapana and kalpana swaras.
Venkat Ramakrishnan and Raghavan Sharma on the mrudangam and kanjira respectively, provided lively percussion support.