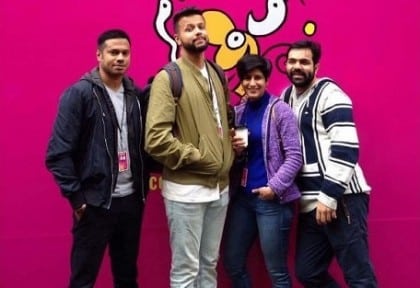 Indian comedians on stage at the MICF

With a few desi cards in their comedy deck, representation of Indians went beyond the token presence this year at the Melbourne Comedy Festival 2017.

With the special Bengaluru Comedy Festival Showcase from India they most likely dipped into the current trend of capturing the multicultural imagination and dollar.
Four talented standup comedians teamed up under the Bengaluru Comedy Festival Showcase banner and brought to life some engaging topics and trivialities.
At the first of their four shows there were some good jocular chops, however, they were still finding their feet on the undiscovered floor. As the show progressed the punches started landing fast and hilarious.
Opener Sumit Anand set the stage for the overall comedic tone which worked well for what they set out to achieve; not taking themselves, or anything for that matter, too seriously.
Sumit’s warm up was all the more enjoyable for his self-deprecating humour. “I was going through tinder ads and I kept rejecting myself. As I swiped through I kept thinking, ‘Nah! I think you deserve better than me’,” he said as he opened the can of hilarity.
True to standup form, everything, including the presence of a dog in the audience and a guest’s tardiness, attracted remarks from the stage. Many went down well.


The segment officially started with Daniel Fernandes, one of the comics we turn to for dark topics, who chose to keep it mostly light.
Only Daniel, with his penchant for dark humour, could make the gory news of a man killed by a tiger, in the zoo, amusing.
He was also insightfully funny with his take on Australia, including his not so tasteful encounter with a Vegemite sandwich.
And yes, Trump and Brexit both got ‘humourable’ mention.
Daniel, also known as ‘thinking man’s comedian’ will be hitting the road soon, travelling around Queensland, with the Melbourne International Comedy Roadshow.
Next on stage was the endearingly bubbly Neeti Palta. She has an energy that cannot be stifled and for much of her act the audience connected well to her, chuckling often at her culturally reflective gags.
Indians in the audience could relate to the stereotypical helicopter parenting, sex as taboo, arranged marriages, low divorce rates in India and the copiousness of an Indian sari blouse.
She claimed to be a Feminist but only upon convenience. “Tell me if I have to change a tyre myself, what is the point of having these?” she said pointing to her chest.

Next came Sapan Verma the young man who has become a YouTube sensation in India and one could soon see why.
Sapan worked the audience with jokes over the impracticality of replacing sex education classes with lessons in frog dissection and India’s beef ban ‘making cows safer than women in India’.
Indians were the target of many jokes but the Aussies were not spared either.
“I had heard about Melbourne’s coffee culture but after coming here I think it’s actually an alcohol culture. It becomes a coffee culture the next morning to make everyone feel better again,” he said, tongue-in-cheek.
All four scored well on their laughter generation ability and the audience left significantly livelier than when they came in.
The material, in general, was far from edgy and the premise was to play it safe.
Overall the show fell short of brilliant but made for an ebullient 75 minutes.
- Advertisement -
Share
WhatsApp
Facebook
Twitter
Linkedin
Previous articleA masterclass in masala entertainment
Next articleBangg on target