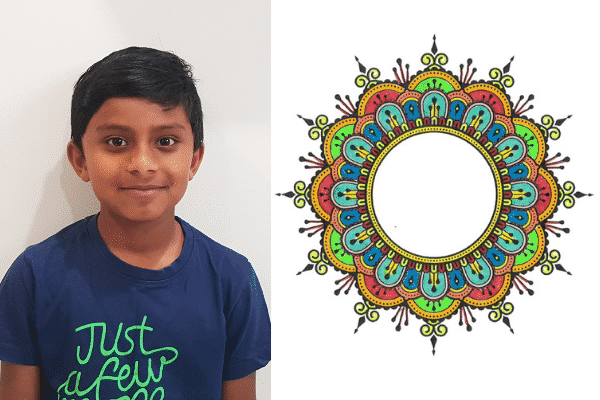 Akshara Srinivasan, 6, of Holsworthy NSW took the top prize in the 7 Years and Under category.

The two young artists take home book vouchers to the value of $75 each. Additionally, Aarav’s work will be featured on Indian Link’s annual Diwali card for 2020.

Saanvi Chaudhary, 8, of Tarneit Victoria, and Devanshi Mandowara, 7, of Epping NSW were adjudged Runners-Up in their age categories. They win book vouchers valued at $50 each.

Aarav was thrilled to hear he won the top prize. “I made five different designs and then selected my favourite,” he told Indian Link.

His elegant piece is a soothing mandala created with much focus and dedication, obvious in its attention to detail in colour and pattern. Its calming quality comes from its balance, order and precision, reassuring in these uncertain times.

The Year 2 student at Sydney’s Rouse Hill Anglican College told Indian Link, “My dad guided me in making the design, but I picked the colours myself.”

Dad Suraj Panicker himself likes to dabble in art, and so encourages his son. “Aarav showed an interest in drawing and painting early on, so we enrolled him in a local art school.”

“I do oils and oil pastels,” Aarav revealed. “It is a lot of fun. Normally I make landscapes. Mostly I like to do whatever I want, but sometimes, to practice, I look at how other people are doing their paintings, mostly online.”

Would he like to become an artist when he grows up? He hesitates before answering, “Mmm… maybe. But I might become a doctor.”

Akshara Srinivasan, winner in the 7 Years and Under category, also claimed she made three versions of the artwork before picking one.

Bright and lively, her mandala is intricately created, with a commendable neatness in execution.

“I took a long time to pick my colours,” the Year 1 student at Holsworthy Public School told Indian Link.

Coincidentally, both winners are students at a community art school in western Sydney, Bandana Cultural School.

Indian Link’s Diwali Art Contest has, in recent years, been seeing group submissions from institutes such as Bandana and from language schools, indicating the rise of privately operated community-level service providers for children.

Entries were received from 121 budding artists in this year’s Indian Link Diwali Art Contest, including many from kids of non-Indian background, and one from India.

The contest, ongoing for nearly a decade now, is intended to include our youngest readers in the spirit of Diwali as we celebrate it in a land far from home, in a way that resonates with them.

Because Diwali is just as much a festival of colour, as it is of lights!