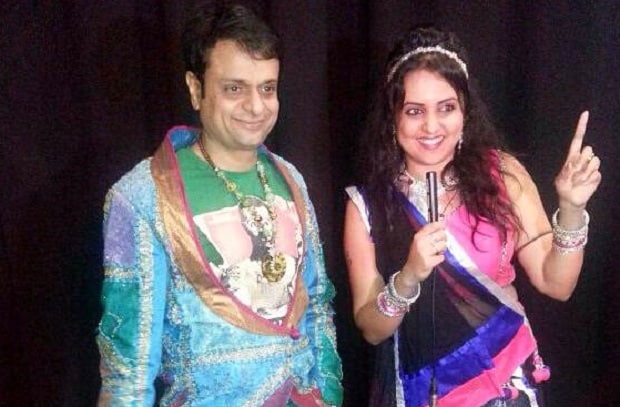 Have you ever wished to go back to your hometown for navartri? Well, for Gujaratis in Adelaide, their wishes were granted as the famous performer Devang Patel himself travelled all the way to Australia to bring us a nostalgic navaratri atmosphere and music. Many people had marked this date on their calendar, looking forward to the event as not many performers travelling to Australia make it to Adelaide, erroneously presuming that it has a tiny number of Indians. After completing his shows in Sydney and Melbourne, Patel was looking forward to performing in Adelaide saying, “Adelaide is a beautiful city with beautiful and young crowd!”
On September 28, the Dom Polski theatre began slowly filling up with people eager to enjoy an evening. I too got there on time, but there was no sing of Patel and his troupe. But gradually as families of all backgrounds started pouring in, the sight was aesthetically pleasing as everyone was beautifully dressed in traditional outfits, with big smiles on their faces. However, their excitement waned as the event began almost an hour late. Hungry attendees including children began to patronize stalls selling Indian food and were soon fuelling up for the night with chatpata snacks like pao bhaji, pakoras, samosas and biryani. No Gujarati event is complete without Gujarati beer that is thandai and masala chai, which was selling out quickly. With lots of chit-chat, yummy food and old friends catching up, it didn’t feel that long before the star of the night arrived.
Starting with the traditional aarti, Devang Patel kicked the night off with traditional navratri songs. He performed live on stage with garba songs and great music, quickly getting everyone into the navaratri mood. The dance floor quickly filled up with kids, teenagers and adults each with their own unique garba (dance) style, gracefully oscillating in circles. From sat tali (seven steps garba) to be tali (two steps garba) or just following someone else’s steps, no-one was willing to be an onlooker. An astonishing number of around 200 people filled the brightly lit hall. It was almost 10pm when Patel started to work his magic with evergreen Bollywood songs like Govinda ala re, Main tera tota tu meri maina, Mere angne mein and many more. Doing the garba on any song is something that only a true born Gujarati can do. From traditional garba, the atmosphere was changing quickly into disco garba. Forgetting the tradition, the dancing now transformed into a mix of Bollywood dance, human trains, bhangra and anything that people felt like doing! It felt as though I was in Mumbai. Yes, Devang Patel had succeeded in bringing navaratri in Mumbai, quenching the thirst of hungry Adelaideans for a disco garba night. The event would not have been possible without organizer Indian Events Adelaide, and many sponsors of the event.
Devang Patel’s professional singing career began with him using the name Mukesh, and he later became a great dandiya singer.
Every 90s child, especially if you’re Gujarati, remembers Patel’s superhit songs Patelscope and Meri marzi from the movie Gambler. His rap number Madhuri Mili Rastein Mein was a rage. A multi-talented all rounder, he can not just sing but dance, act, spoof and produce. He has also been a part of various Bollywood films like Chahat, starring Shahrukh Khan.
The evening ended on a high note with a very satisfied audience leaving tired, but happy to have experienced the traditional garba of Gujarat and the dandiya beats of Mumbai in Adelaide.