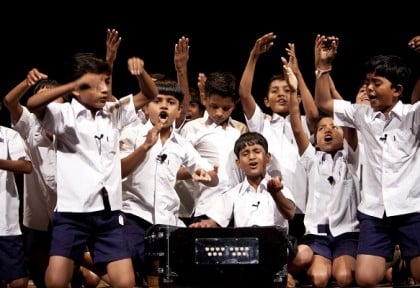 While The Manganiyar Classroom showcases a dying musical heritage, it is also a cry against the educational system in India

Theatre director Roysten Abel, famous for ‘The Manganiyar Seduction’ presented at the 2011 Melbourne Festival, returned this year with little story tellers in ‘The Manganiyar Classroom’.


The mesmerising show was presented by Melbourne Recital Centre in association with Asia TOPA and Arts Centre Melbourne last month.
The Manganiyars are a tribal community from Rajasthan with a strong musical tradition. In this newest production, 35 young Manganiyar kids raise their voices against the teacher in protest at how they are being taught, challenging the system all the while as they entertain with their songs.
The little fellows simply stunned with their talent and energy; the song and dance, and sheer rhythm in their music, drew the audience in to their way of life, which sadly, is fast disappearing unless something is done about it.

“I encourage you to enjoy the absolute beauty of the Manganiyars singing, to see some unique talent from another part of the world and to experience the sheer power of music though innocence,” says Abel.
The production is not just an introduction to the glorious musical reserves of this treasured tribal community, but through it a kind of activism to highlight issues in the present Indian education system. It was all about a group of naughty boys provoking and challenging their teachers, alongside some truly visceral, passionate and powerful singing to allow them to continue learning through their music.

The show also celebrates the origins of storytelling and tradition – the young boys who are destined to be keepers of the flame, the storytellers of the future, the holders of the tales and traditions.
Abel heard the Manganiyar children in 2005 and engaged talented kids in the first production which resonated with the audiences. Almost eight years later, when he returned to Jaisalmer to see the brilliant young kids, he was speechless as he could not recognise them. “They had lost the spark in their eyes… with no confidence. They told me they had gone to school for about seven years and had chosen to drop out of the music.”

This metamorphosis in the kids disturbed him enough to lead him to work on this production to talk about the issues in the education system through this musical experience.
After having worked and performed with these children for the past three years Abel is trying to establish a school, a state of the art alternative education system for the Manganiyar children so they can acquire education in a way they will only gain and not lose.
After having seen this performance I truly hope Abel’s efforts yield results – music can not only play a great role in education, it can also help in keeping stories alive and importantly, to share these stories around the world.
- Advertisement -
Share
WhatsApp
Facebook
Twitter
Linkedin
Previous articleGoan goals
Next articleIndian attacked in Hobart