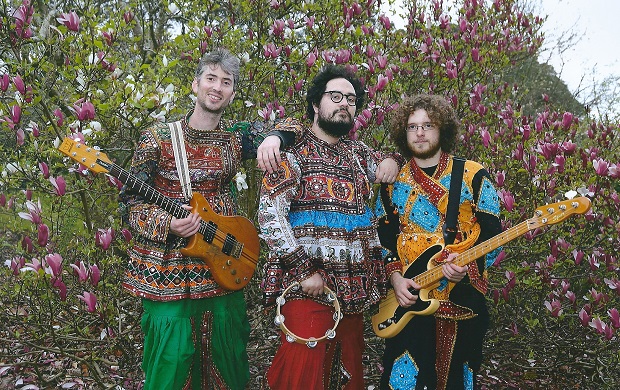 People often complain that Hindi film music is inspired and influenced by the West. Musicians like RD Burman were so largely influenced by popular genres of music, that many of his compositions had traces of Mariachi, Bossa Nova, rock ‘n’ roll and jazz. We’ve also heard disco and funk being adapted, some would argue even copied in the 80s by many well-known Indian film music composers, such as Bappida. However, it’s very rare that the opposite ever happens.
Post Bombay Dreams and Slumdog Millionaire, perceptions about Hindi music in films has definitely changed. The West has started taking a keen interest in Indian film music, particularly in Bollywood songs. Bollywood dancing is also getting quite popular, with several Bollywood dance troupes and teachers operating in Sydney. It is heartening to see an aspect of Indian culture being accepted and appreciated outside of India.
When I was first introduced to Electric Korma and their music, I was overjoyed. This team of three talented musicians makes unique Bollywood-rock fusion music (or Hindi-rock music as they call it). The band is comprised of singer and guitarist George Stanton, Michael Manzini on bass and Nik Russo on drums.
Here are excerpts from the recent Indian Link Radio interview with George Stanton, which was a fun experience for the team and our listeners.


Shraddha Arjun (SA): Your band seems to understand and perform Bollywood songs so beautifully, how did Electric Korma originate and what drew you to Indian film music?
George Stanton (GS): Well, I married an Indian girl Smriti, and she introduced me to her favourite Bollywood songs. I thought that Electric Korma could have a go at playing one. We were already playing original songs that I had written and composed. One day I was learning to count ‘1, 2,3’ in Hindi, and was struggling somewhat. Smriti showed me a video of Ek do teen to help me learn… it was so catchy and so much fun.
Someone from the Indian community in Wollongong had seen us play and invited us to perform at an Indian function. So I thought as a gesture to the Indian community, I would learn a few Hindi songs. So we learned Ek Do Teen and Mehbooba (Sholay). We’re into the sound and era from the 60s and 70s, it’s what we like.

SA: Was it difficult to adapt and translate the ethos, words and context of Bollywood songs into your style of music?
GS: With some of the songs yes, it can be extremely challenging. But Ek Do Teen is a very Western kind of song. If it weren’t sung in Hindi, it wouldn’t sound uniquely Indian. Mehbooba has little instrumental sections between the verses, which is fairly exotic to western ears; that took a little bit to get our heads around. What really challenges us is when we try and play something by AR Rahman. We tried playing In lamhon ke daaman mein from the film Jodha Akbar. It was extremely difficult. Just the first line took me an entire day. Working on how he fits all those syllables in too me an awfully long time to learn (hums a bit for our listeners).

SA: Wow, if I shut my eyes and listen to you sing, I can’t tell if you’re an Indian or not!
GS: Someone told me that at a gig once! And at the very next gig someone else came up to me after my performance and said, “Congratulations, you’ve got at least 30% of the song right!” I thanked him for being honest!

SA: I tweeted the link of your Ek Do Teen rendition on YouTube to Madhuri Dixit, who will perform in Sydney with Shah Rukh Khan. Will you attend her show? After all, she taught you how to count in Hindi…
GS: I’m quite excited that she’s visiting Sydney and performing here alongside SRK, but unfortunately I can’t be there. She’s an exquisite dancer; her dancing in Ek Do Teen is equally stunning! I’ve never seen anything so precise.

SA: As a band, how do you find the time to learn Bollywood songs despite a busy schedule?
GS: The band’s contribution is massive, they are very diligent and hardworking boys. The editing for Ek Do teen was entirely done by Nik, and Michael recorded the song. It usually takes only about two rehearsals for each song, but this one was recorded on the very first rehearsal. They are very professional and hardworking musicians.

SA: Do they understand and follow Indian music as well?
GS: As you could hear in the chorus of Ek Do Teen, they know how to count from 1 to 10 in Hindi! The first Bollywood film I saw was Sholay, I completed it in about three days. When I passed it on to Michael, he watched it three times in one day. He’s an absolute Bollywood nut! His mum is even worse, she’s now a part of a Bollywood dance troupe, I think! So they’re very keen.

SA: Have you ever been to India, and where did you go?
GS: I’ve been there twice; the first time to get married. I met my wife here at the University of Wollongong and halfway through my honors we decided that we had better pop over and get married. We went to Nagpur, Delhi, Varanasi and Mcleod Gunj in the Himalayas. About around a year later we visited India again with our three-month-old son Krishna.

SA: Have you been exposed to other Indian languages?
GS: We’ve had a go at singing Gujarati, actually. We went to a dandiya night at Rosehill racecourse once. I had no idea what it was about, and it was lovely, just amazing! Everyone was doing this swirling kind of dance and the music was like an extended instrumental psychedelic Pink Floyd jam. I couldn’t believe that it was actually happening! It really did sound like very early Pink Floyd. I thought to myself, wow! How can we be a part of it? And then, playing at the Indus Australia fair, Chintan Trivedi the organiser, asked Electric Korma to perform with Devang Patel at a Dandiya night. So we had our chance!

SA: What’s the Indian scene like for a musician here in Australia. How would you measure success?
GS: I don’t know, I’m trying to find that out myself! So far the Indian community is extremely warm and welcoming, they’re eager to have us each time we play. We’re measuring our success by just how many people we can get up and dancing!

Electric Korma performed with Devang Patel at the Dandiya event a week later, dressed in traditional Gujarati costumes. The band performed with panache and an unsuspecting crowd danced along. Electric Korma have just begun their journey, and will continue to rock on! So let’s look forward to more Hindi-rock through their high energy and heartwarming music.