A tribute to Tagore 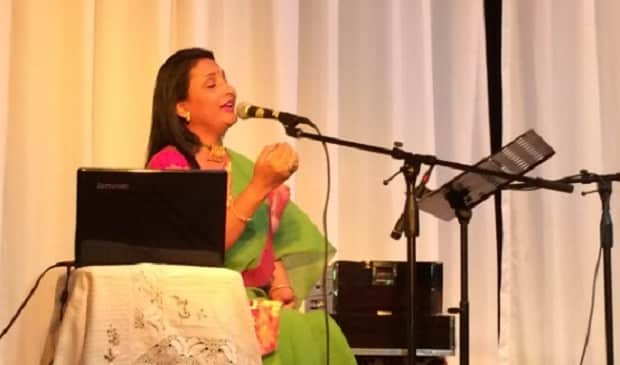 The renowned Aditi Gupta of Kolkata, the artist invited for the occasion, fulfilled the yearnings of those gathered to listen to some authentic Rabindra Sangeet in the traditional style.

Aditi has been exposed to Tagore’s works since childhood. Little did her mother, who sent her to Daksginee, a noted Rabindra Sangeet institute in Kolkata, know that Aditi would go such a long way in this particular field. She performs regularly on All India Radio and on various Bengali TV channels. She has received many awards like the Dakshinee Puroshkar and Sunil Kumar Roy Smriti Puroshkar.

The songs she chose for the evening were mostly popular ones such as O-aamar desher maati (O my native soil, I bow my head to you in deep obeisance); Bhalobashi, bhalobashi (I love, I love), Sokhi aandhra ekela ghare mon mane na from Shapmochan (I fail to content my mind, O darling, in this dark lonesome home) and the very well-known Purano sei diner katha bhulbi ki re hai (How can you forget the good old days, dear).

Aditi has a sound understanding of the chemistry of the lyrics and the tunes of Rabindra Sangeet, and has the seasoned singer’s uncanny ability to transmit feelings through her voice.

“I am truly indebted to my Guru, the renowned Shri Rano Guha Thakurata, who inspired me to immerse myself into the world of Tagore’s music,” Aditi said later.

Aditi’s word of advice to others interested in Rabindra Sangeet, was to engage with the art form extensively and learn the various facets of it in full detail, in order to bring out the best in themselves.

Earlier in the evening there was a fine display of talents from local artists, including very young singers and dancers who stole the hearts of the audience with their enthusiasm and performances. I was particularly impressed by Sandip Bhattacharya and Barnali’s rendition of Kunti and Karna’s exchange of dialogues in Mahabharata. Apparently Tagore re-worked on old stories from the Mahabharata and from Buddhist lore so that they resonate in modern times. The dialogues form a dramatic encounter between a fostered son, Karna and his long-lost birthmother Kunti, set against the backdrop of the preparations for the great war between the rivals, the Pandavas and the Kauravas.

For Bengalis worldwide, Rabindranath Tagore remains a treasured icon who will continue to inspire every aspect of their lives for generations. My own personal experience is that reading and rereading Tagore often opens up new vistas. A recent discovery for me has been the influence of Islam on the revered writer. Apparently his private library contained many writings by Rumi, Sadi, Zami and Hafiz. In fact, some allege that a few of his poems in the well-known Gitanjali contain traces of Islamic spiritualism and mysticism. Like it or not, even Tagore’s critics do not deny that Tagore was a figure larger than life, one that continues to influence millions even today.