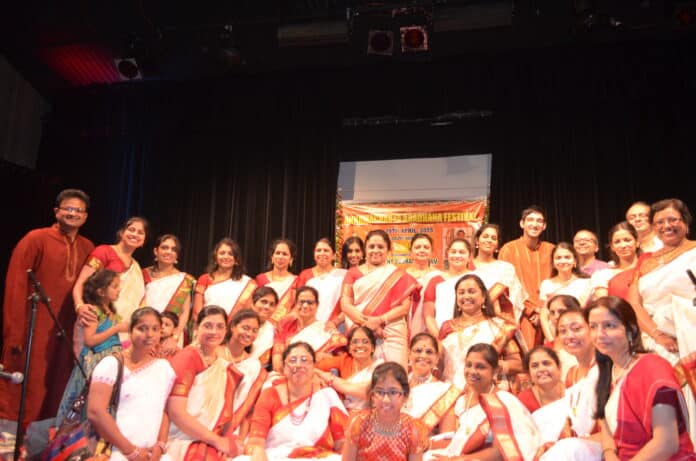 A couple of hundred lovers of Carnatic music had a unique opportunity to enjoy the first-ever Annamacharya Sangeerthana in the middle of autumn, at the Parks Community Centre in the western suburb of Adelaide.

Sri Annamacharya, born in Tallapaka, a remote village in Andhra Pradesh, in 1408, was one of the earliest saint-composers of South India to compose songs called sankirtanas. His songs are in praise of Lord Venkateswara of Tirupathi temple, arguably the richest temple in the world. During his long life span of 94 years, he was prolific in composing 32,000 sankirtanas, 12 satakas (sets of hundred verses), Ramayana in the form of dwipada (couplets) Venkatachala Mahatmyam and a few others. His works are mostly in Telugu and some in Sanskrit.

Musicologists affirm that Annamacharya, his son Pedda Tirumala and grandson Chinna Tirumala – collectively called Tallapaka composers – were the first to set the structure of Carnatic music by composing songs with pallavi (introductory lines) and charanam (main body) which later composers adopted adding anupallavi in between.

Annamacharya wrote his sankirtanas on palm leaves. His son had them engraved on copper plates which, for reasons unknown, lay hidden in a cell opposite the Hundi in the Tirupathi temple unnoticed for over 400 years until discovered in 1922. From then on, significant efforts have been made to bring to light many of his sankirtanas to a wider audience. And the Adelaide performance was one such event.

Carnatic music enthusiasts are used to savouring the Thyagaraja aaradhana, a memorial concert held annually in honour of 17th century composer St Thyagarajah. In this event, held in different parts of the world including at his place of birth Thiruvaiyar in Tanjavur district, hundreds of musicians sing en masse his compositions all day long. Although the equally famous Annamacharya deserves similar venerable treatment, somehow celebrations in his honour and memory are less universal. As a way of filling this gap and fulfilling the aspirations of music aficionados, Adelaide’s Indrakanti Bharthy Subrahmanyam organised the first Annamacharya Sangeerthana. It was hugely appreciated.

Bharathygaru, as she is affectionately called, may be a new entrant to the local music scene but brings with her a solid background, with a Masters’ degree and experience as a music lecturer in Chennai. She has written a book on St. Thyagaraja’s rare compositions and has also composed a few pieces herself. Since her arrival here in 2006 she has become a well-known music teacher, with a large number of students, some of them learning on-line from inter-state and overseas. It is no wonder she is keen on promoting interest in Indian culture by organising single-handedly an event of this magnitude.

She trained her students, and some not-so-musically-talented volunteers, every Sunday for six months, bearing all the expenses of hiring the hall and also the performance venue and all other incidentals. She had the courage and conviction to bring to the stage 34 singers of all ages including 83-year-old Gomathi Mami who is visiting from India. Also on the stage were her son, an accomplished violinist from the US, and her two daughters-in-law, and four of her students who came from Melbourne to be part of the event. That she had clearly visualised the entire show from day one was evident the moment the curtains were raised to reveal all the female singers in pearl-white sarees and red blouses, replicating the image of Saraswathi, the goddess of arts and culture.

The programme ran for an hour and a half with a fine selection of nine songs starting with ‘Bahavumulona’ in raga ‘Suddha Dhanyasi’ and ending with ‘Adivo alladivo’ in ‘Madyamavathi’.

Much more than a composer of devotional songs, Annamacharya was concerned with social issues as was evident from his composition ‘Brahma mokkate’ emphasisng that in the eyes of God, every human being is absolutely
equal regardless of colour or caste. Imagine thinking on these lines in the 15th century! Including that number in the programme was admirable indeed, and it was received with the loudest applause.